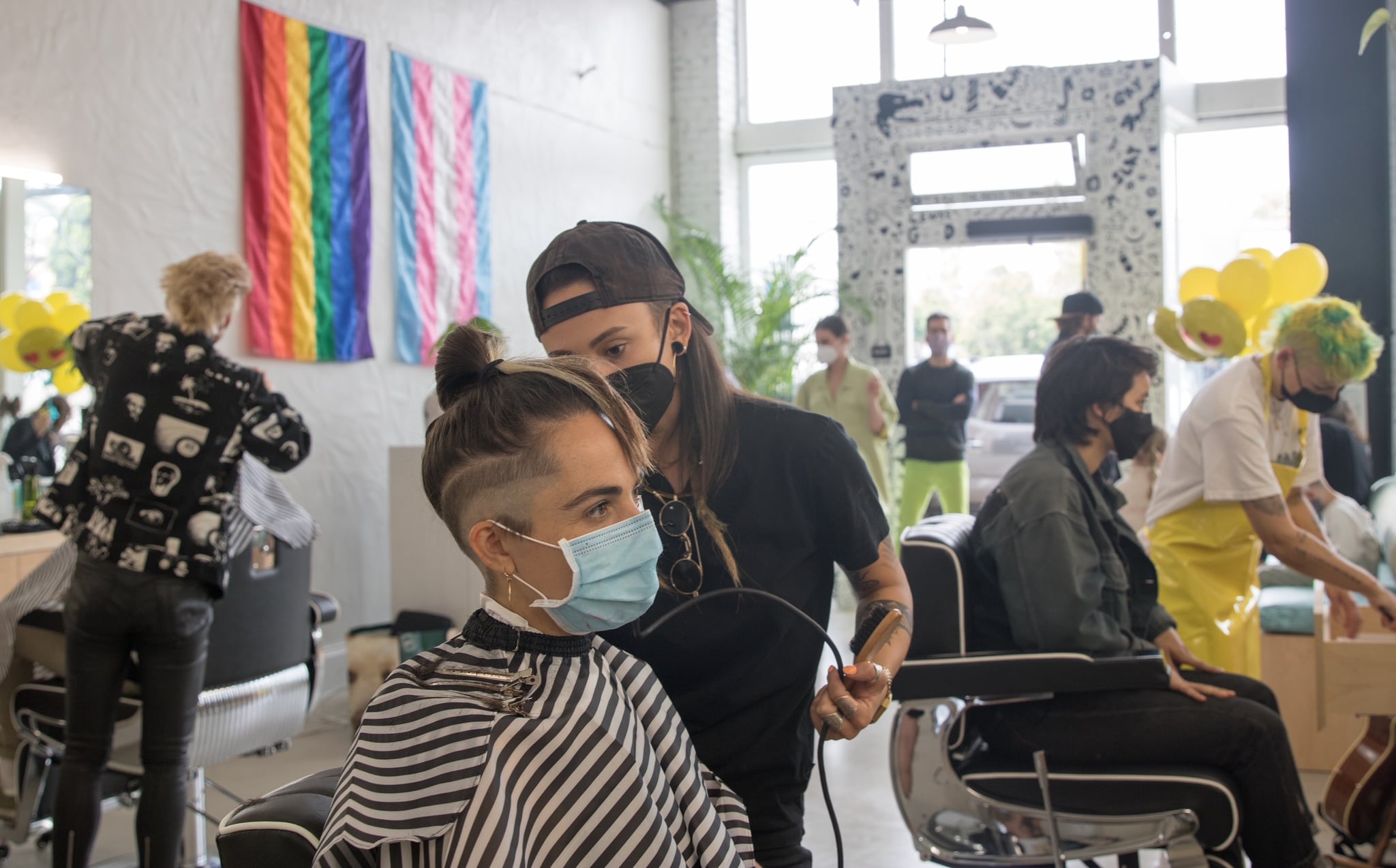 I’ve never drastically changed my hair – no highlights, coloring, fun cuts, layering, or anything in between. I’ve always asked for the same cut (straight across around shoulder length) from the same hairdresser (the one my mom has gone to for as long as I can remember). The biggest decision I have to make every six months is if my hair will fall right above, below, or at my shoulders.

Over the years as I have come into my queerness, I itched for a change. My long-lasting cut did not represent how I felt, but I was not confident enough to change it. “After graduation,” I always told myself. By the time I was graduating, we were in the first few months of a global pandemic, forcing us all inside. Six months into staying home, I bought cheap shears online and my partner (you guessed it!) gave me my usual cut.

As vaccinations were in sight, I thought a lot about what my first, non-virtual activity would be. I could have never imagined a haircut would have been first on that list, though it sounded a lot more fun than my original thought: going to a grocery store outside of my neighborhood. Sure enough, I found myself sitting in front of Magda Ryczko, the founder of Hairrari, a gender-neutral, all-inclusive barbershop with locations in New York City and Los Angeles.

She took the time to truly understand what I wanted. I’ll never forget the buzzing sound of the clippers running across my head for the first time: I was shedding a layer of myself. I left that day with a haircut that made me feel more confident than I ever had before. To me, this haircut was the difference between feeling okay and feeling confident: between tolerance and euphoria.

When Magda opened Hairrari in 2011, she only had two chairs – the same Williamsburg location now has five. “My vision wasn’t that big,” she told POPSUGAR. She went to cosmetology school and worked as an assistant: sweeping, washing out color, and doing blowouts for two years at 12 salons before a woman-owned barbershop in Williamsburg took a chance on her. She was there for four years before she started to look to open her own shop called Manetamed – the still-standing, 10-year-old Williamsburg location. Over the next three years, Madga opened two more NY locations, both called Hairrari because she “ran out of names,” and launched a line of products. Earlier this year, she co-opened one in LA with a former employee. 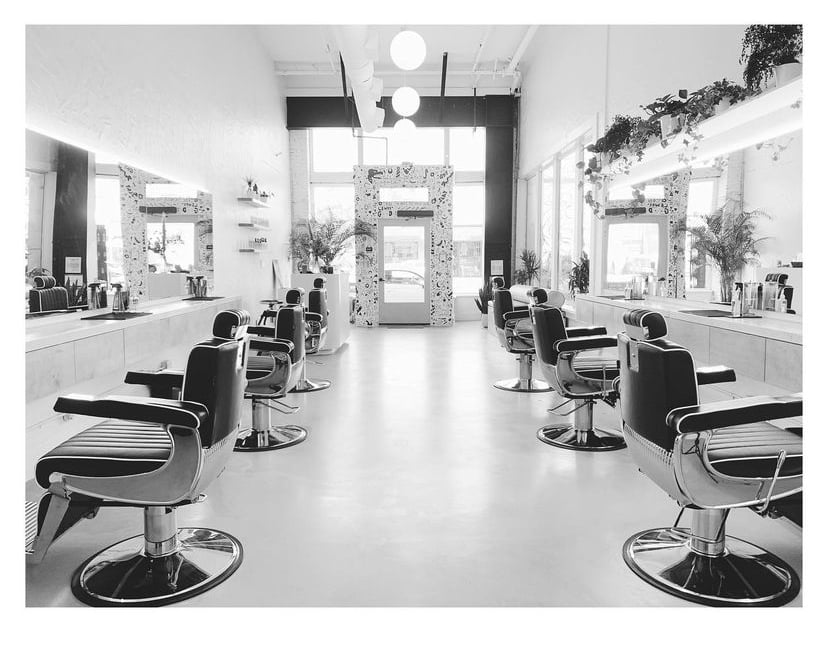 We sat down with Magda to learn more about Hairrari, the importance of haircuts in the LGBTQ+ community, fostering a space for inclusivity, and the domino effect of inspiring people.

POPSUGAR: I think so much of what you’re talking about also really talks to the essence of the community that you’ve built of the staff and of your employees, but also of the clientele and other businesses in the area. It’s really great to see what you’ve built. How does that feel?

Magda Ryczko: Well, thank you. I mean, incredible. I honestly don’t even have time sometimes to reflect and say “Oh wow, I’ve built this” because I’m always building it every day. I think a lot of it has to do with the training, because we give so much and we put in that structure – training people well and branching out to other businesses, doing collaborations, and giving back. I think, then, the universe gives us back as well. I just feel like we always have to keep giving back in some way.

MR: It feels really good when people come together and they just share how happy they are to come in. The other day, somebody wrote me saying, “Thank you so much for providing such a place welcoming for trans men.” It kind of made me sad a little bit because then I was thinking every place should be welcoming for trans men and trans women and everybody. That’s our mission.

Nobody should feel fear or uncomfortable going anywhere, especially where they’re spending their money. They should be spending their money in places that are supporting their beliefs or whatever that is in the society. I feel like it’s really important for all of us to create space for people to be who they are. Every day we open, our eyes are opened to something new that we can help with. Right now, definitely [supporting] trans rights, all the queer rights, Black Lives Matter, and bringing up Asian lives too, because I feel like this is a really important time right now and the last year was so important for society.

PS: How do you try to foster that inclusivity within all of the locations and make it such a welcoming space?

MR: How did it start? When I opened initially, I just opened a barbershop. It wasn’t labeled anything, but since I identify as a lesbian, I guess, I had some lesbian clients from before. They started leaving reviews like “best dyke haircut.” Then I attracted a lot of lesbians or queer people, and then trans people. We were just friendly for everybody and it just naturally became that kind of a space. We also have a lot of straight people that work for us, which is important, I think: to spread the message to straight people. A lot of our clientele is also straight, and [in] the beginning it was like 80 percent men and 20 percent women. I don’t know how many nonbinary clients, but it’s grown. Now it’s just very 30/30/30, I would say.

I feel like that’s important: to be welcoming to anybody and to show that we’re cutting all ages, all genders, all sexual orientations. We do that by posting photos, talking about it in articles, just being welcoming, having kid prices on our price list, and not having a women’s haircut or male haircut. We do have “feminine long hair” on the schedule, because feminine means a description of the hairstyle. You can be any gender and get “feminine long hair” or “masculine long hair.” It’s a different skill, so not all our barbers do feminine long hair. Somebody can book with the wrong person and they can’t do it. Not everybody specializes in everything, and I require everybody to do short hair. 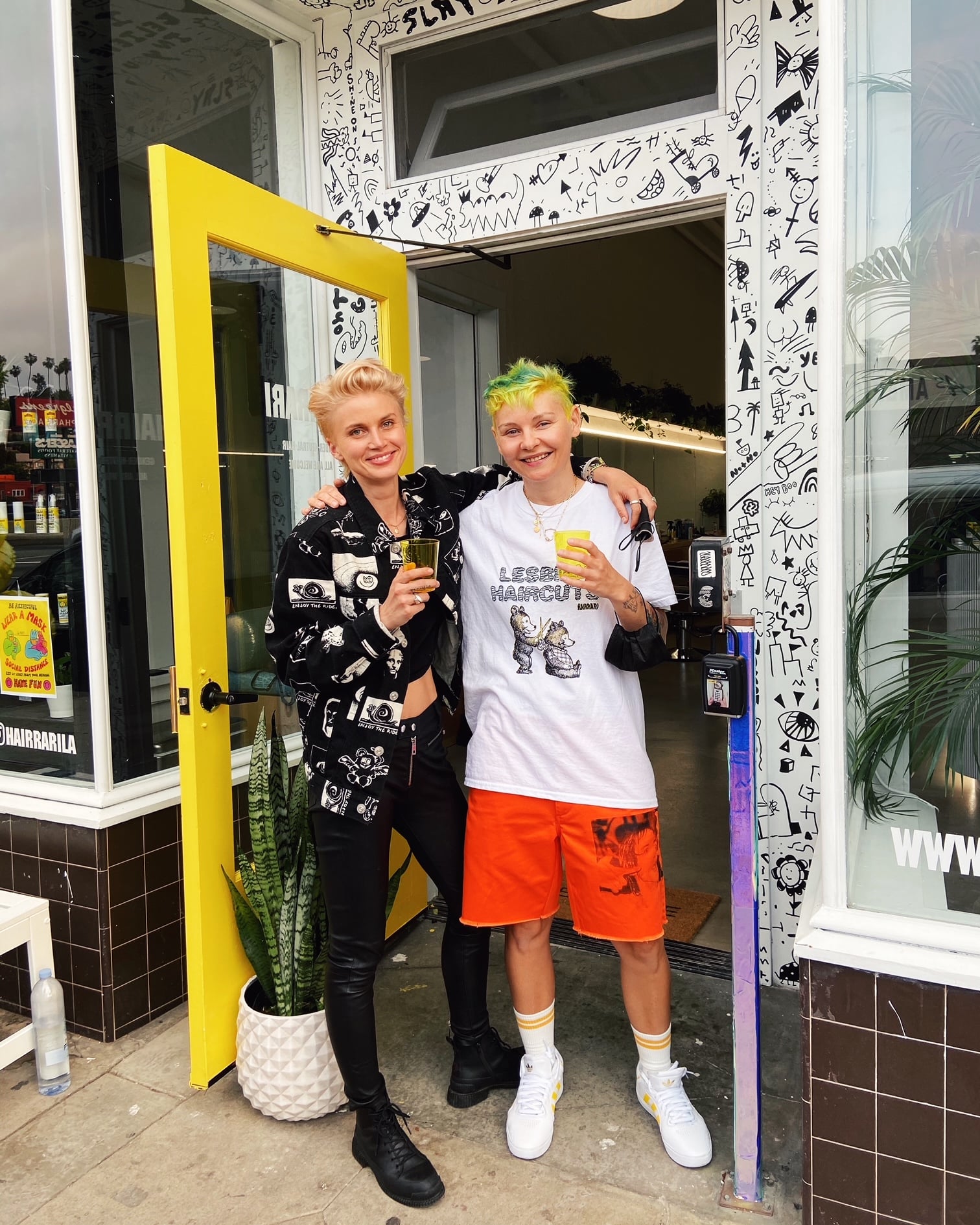 My Instagram name is @lesbianhaircuts. In high school or middle school, that was a degrading word. I wanted to neutralize that word, or make it not a negative word, and put it out there because it is a positive. People should be proud to be a lesbian and/or gay, or anything they are, as long as they’re true to themselves or treating people well and being a good person.

Basically, I just look in the society and I see what could improve and I try to improve it in my small way with my business and the brand. I think it’s important for someone to come and not have to explain [pronouns] to us or not have to be misgendered or something like that. We’re all getting it everywhere else, so hopefully we can — one business at a time — get better and keep growing and keep learning.