Throughout time, a woman’s hair has been deemed her “crowning glory”. From the powdered vertical explosion of Marie Antoinette to the Katharine Hepburn bun and the waterfall tresses of Beyoncé, it signifies status, beauty, life force and sexuality. Yet beyond these signature styles, a woman’s locks signify power: who these women are, what they stand for and how they proclaim themselves to the world. Conversely, the shaving of women’s heads at Auschwitz purposely expunged femininity, fertility and individuality.

In her book Hair Stories, Los Angeles-based photographer Rohina Hoffman explores the complex relationship between women and their hair, what it means for women of different ethnicities, health, ages and backgrounds, and how its appearance extends beyond simple aesthetics. 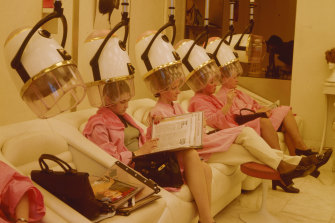 Rohina Hoffman: “Hair is a language, a shield and a trophy.”Credit:Getty Images

“What I discovered is that hair is a language, a shield and a trophy,” writes Hoffman following several dozen interviews and portraits. “Hair is a construct reflecting our identity, history, femininity, personality, and our innermost feelings of self-doubt, ageing, vanity and self-esteem.

“Hair also has deep sociological roots. It can be indicative of a certain religious or political belief system and, like its genetic code, is complicated and touches our very core.”

For Muslim women, a headscarf is both a display of modesty and a way to be closer to God. Rose McGowan’s buzz cut, prior to #MeToo, acted as a force field to repel male advances in Hollywood. Such is the scrutiny of a high-profile woman’s ’do that when prosecutor Marcia Clark went from a stern perm to a sleek style during the 1995 O. J. Simpson murder trial, the Los Angeles Times reported on it.

Yet hair texture, colour and bulk change as women age. When asked about her unkempt look back in 2008, Patti Smith, then 61, told The New York Times Magazine, “I’m disinterested. Since I was child, I hated having to deal with my hair.”

Societal opinion also chips in. Is long hair appropriate for a woman over 40? Does grey hair on an older woman render her unemployable? Should a 50-year-old woman wear plaits? And what if illness means you no longer have hair to style?

Sunday Life spoke with three women about the relationship they have with their hair.

“I realised hair has power”

Shannon Martinez, 38, from Melbourne, is a chef who owns plant-based restaurant Smith & Daughters and Smith & Deli. She’s been dyeing her hair since she was 15. 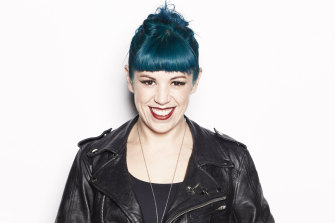 "My mother never wanted children, but when she accidentally got pregnant and had me, she became super maternal. I think she liked being able to play with a little girl’s long black hair like it was a doll’s. My hairdos were extravagant, like the Princess Leia braided buns she styled.

As a teenager, I was heavily into the goth look. I didn’t want the same hair as anyone at school and had no desire to blend in. For my year 11 formal at Methodist Ladies’ College (MLC), Mum paid for me to get a full head of fluorescent yellow and black extensions: I looked like a goth Baby Spice.

I was threatened with suspension if I didn’t remove them. Mum was pretty uppity with the school. She said she didn’t pay all that money to take them out, so she refused.

In 2017, years after I’d left, MLC invited me back to do a career talk as I’m the most successful hospitality student they’ve ever had. It was ironic, as I always got in trouble for my hair. But I was able to dispel the stigma that someone like me, with green hair and tattoos, cannot be professional.

In the mid-2000s I played bass in a goth metal band. We toured the US, where I wore hairpieces and had huge double ponytails. I loved being super feminine but over the top – my silhouette with huge pigtails looked amazing. That was when I realised hair had power. I wanted to come across as this confident, loud, don’t-give-a-f… sort of person. Hair does that without you having to say anything.

I’ve been bleaching my hair for more than 20 years. That entails hairdresser visits every seven weeks and two home dyes in between; my house is covered in green stripes.

Its condition has been good up until now, but managing a restaurant and a deli, being responsible for 50 staff and writing cookbooks, the stress has manifested through my hair and it’s started to fall out. This has upset me; I didn’t realise I was so attached to it. I’m taking supplements to fix it. Fingers crossed it comes back, as it’s super thin. My hair is like my security blanket.

As long as I can get away with it, I will always have coloured hair. There’s no age when you’re too old, you just have to change the way you do it. People know me for my Enchanted Forest shade green and black hair. It’s my visual signature as a person.”

“Not dyeing my hair is liberating”

Louise King, 55, from Melbourne, is a social worker. Her grey hair embodies her authentic approach to life. 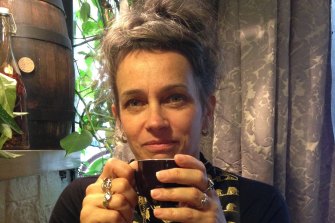 “As a child, my hair was unruly. At six, Mum would cut knots from the underside of my hair on my neck. In the early 1970s, my dad was the press secretary at the Australian High Commission in New Delhi. While we lived there, my aunt came to visit. She had beautiful long blonde hair and crazy hairpieces. As she did her hair I was mesmerised – I had never seen so much glamour.

At high school, everyone said I had amazing hair – long, mid-to-dark brown and wavy. At night, I tied my hair in rags to shape tight curls.

When I left school to study politics, I got asymmetrical cuts with lots of colour. I had three-quarters of my hair shaved, with one big lump hanging down. I thought it looked stunning, but when I see photos now, it was disgusting. I liked to push boundaries and I did that with my hair.

In my mid-teens I contracted hepatitis C. After my son and daughter were born, I had to have a treatment called Interferon. It made my hair fall out. I ended up with very fine hair and it’s never been the same since.

I began to think about going grey in my 40s. I met this woman who was grey and had this great haircut. She told me the name of her hairdresser and I started to get these cuts that I loved. But I was poor while studying for my master’s degree in social work and the cuts were expensive and the regrowth awful. I questioned why I was doing it, so I grew my hair out.

I get called The Lady With Grey Hair. People look at me and think I have so much experience, which is weird as I’ve only been a social worker since 2011. Not colouring my hair is more complex than a feminist issue. It’s a cultural and ageist issue. It’s been very liberating, as at this stage of my life my hair is just my hair.

I am really happy with how it looks. I know who I am: I am a woman, a partner and a mother. I also love my work. I don’t need to dye my hair to look younger and feel better.

By not dyeing your hair, you’re stripping back to your essence. So having grey hair is not incongruous with the rest of my life. It’s is an extension of me. I am part of my tribe: the women who don’t give a f… .”

“I can survive without it”

Meredith Holmes, 43, from Melbourne, is a zumba instructor. In 2017, she lost her hair during chemotherapy. 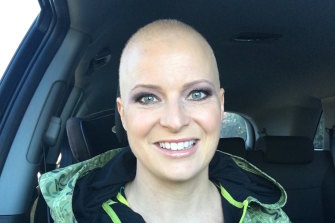 “When I was 18, I wanted to be like Jennifer Aniston, so I had my long, thick, mousey hair feathered, cut into bangs and highlighted. Hairdressers often told me I had beautiful hair.

My hair has been a huge part of my femininity, so when I lost it during cancer treatment, I didn’t feel feminine at all. When I looked in the mirror, the woman I saw reflected was just not me. I was diagnosed with triple negative breast cancer in 2017. It was a huge shock. I’d just separated from my husband. We’d been together for 19 years and had three young sons. It was very scary.

Following the removal of a tumour, I needed four rounds of aggressive chemotherapy and 30 radiation sessions. I tried a cold cap, but it didn’t work, and within a week my head was bald and patchy. I’d wake to clumps of hair on my pillow.

I decided the boys and I would shave it off together, make an occasion of it. I knew it would be confronting, as they’d only ever seen me with long, blonde hair. The oldest, the nine-year-old, was really unhappy about it. He was quite emotional. “Do I have to, Mum?” he said. It was hard for them.

I wanted to look well, so I put a lot of effort into my makeup. I stepped it up because of the insecurity.

My hair has grown back. It is down to my chest. The texture and thickness are the same, but I have chemo curls on the ends. My hair means a lot to me, as it says how I present to the world. I thought recently, ‘Wouldn’t it be interesting to shave it off for charity?’ So obviously I am not that obsessed with my hair. I now know I can survive without it.”

This article appears in Sunday Life magazine within the Sun-Herald and the Sunday Age on sale March 8.

Related posts:
March 6, 2020 Beauty and Fashion Comments Off on ‘I get called The Lady With Grey Hair’: Our complex relationship with hair
Celebrity News:
Birds of a Feathers Lesley Joseph on Pauline Quirke not being on TV
Elon Musk got booed on stage at Dave Chappelles show in San Francisco
Gayle King Defends Prince Harry & Meghan Markle’s Netflix Docuseries!
Taylor Swift vs Olivia Rodrigo! | Perez Hilton
Scott Disick 'Regrets' How He 'Handled' Ill-Fated Relationship With Kourtney Kardashian As He Tries To Move Forward
Recent Posts