The Duke and Duchess of Sussex made one of their final official engagements on Thursday before they step down as senior royals on March 31.

The Endeavour Fund Awards for members of the armed forces, held at Mansion House in London, drew huge crowds despite the rain. Further proof, as if any of us needed it, that the longer Prince Harry and Meghan Markle stay away between appearances, the more intense their magnetism becomes. 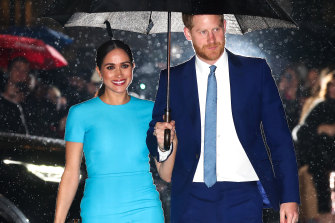 A beaming Meghan and Harry arrive at the Endeavour Fund Awards.Credit:Getty

The couple did not disappoint either, arriving in complementary blue outfits. This particular hue has become something of a signature colour for Meghan. She wore it while pregnant on tour in Tonga in 2018, and again, in 2019 while touring Cape Town.

And for one of her last formal appearances – and her first since the so-called "Megxit" – Meghan chose a form-fitting style, valued at nearly $2000, from designer Victoria Beckham. The dress has since sold out everywhere.

The choice of brand is notable. Beckham is the one time Spice Girl now considered pop royalty, the woman who successfully pivoted out of the Top 40 and into New York Fashion Week.

Blue is the colour of of the House of Sussex; it’s the favourite colour of England, and Harry is wearing royal blue.

The message seems clear: not only are the couple signalling their deep unity – Meghan does not call the shots, they both do – but there's an added sub-textural wink to their sartorial choices, as though saying, "the Crown may have taken our official title, but it can never take away our brand". 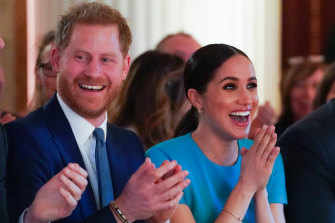 Meghan and Harry know the power of celebrity.Credit:Getty

But Meghan – who spent years diligently carving out a career in entertainment and who built an Instagram account that might best be described as Goop-goes-inspirational – understands, as most American celebrities do, that self-promotion is not a dirty word, and the age of trying to avoid the inevitable onslaught of paparazzi, and trial by media is over.

You control the message; you get ahead of the narrative; you decide when you will and won't be seen. Gone are the days of the press release. Look at Katy Perry, who announced her pregnancy via a new video on Wednesday. Look at Beyonce, who circumvented the paps to debut the face of her first born, Blue Ivy, on her website.

This is the world Meghan knows, the world she is very comfortable operating in. And, despite the protestations of the Queen, who turns 94 in April, it's now the way of the world.

See, Markle knows what royals don’t: we live in an age of celebrity. It doesn’t matter about your lineage, your rank. What matters is your brand. What better illustration of this is there than Prince Andrew? His reactive, bumbling response to accusations of a close, beneficial relationship with the late Jeffrey Epstein has only proven what a cloistered, privileged bubble he lives in.

But Harry (who spent 10 years serving in the armed forces) and Meghan (whose estranged father worked alongside actors for most of his career) both know something about different worlds. They also know this: that if royalty brought with it even a modicum of real respect or reverence, the tabloid media would have shown them that years ago.