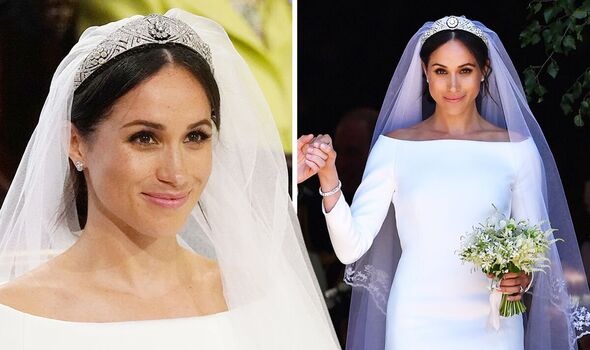 Meghan Markle wore a bespoke Givenchy wedding dress, designed by British fashion designer Clare Waight Keller, for her wedding to Prince Harry in Mary 2018. While her dress was simple in design, her veil was intricately embroidered with flowers representing the countries of the Commonwealth, and in both her dress and veil, Meghan had added two personal touches.

Meghan took part in the ITV series Queen of the World, where she discussed her wedding veil and its connection to the Commonwealth.

During the clip, Meghan revealed she hid a couple of personal mementoes in her dress and veil.

For Meghan, her “something blue” was a reminder of her and Prince Harry’s very first date.

She explained: “Somewhere in here there’s a piece of blue fabric that’s stitched inside – it was my something blue. It’s fabric from the dress that I wore on our first date.”

It’s recently been revealed, Meghan and Harry first met at Soho House’s Dean Street Townhouse, London, in the summer of 2016 after being set up by a mutual friend after Harry saw Meghan in one of their Instagram posts.

The first meeting is said to have lasted three hours with Harry enjoying a beer and Meghan a martini.

Perhaps the “something new” part was represented by what she “snuck” into her veil.

Meghan chose a California poppy “which has nothing to do with the Commonwealth”, but represented the place where she was born and raised.

Meghan’s veil was 16-foot and made from silk tulle, it featured 53 flowers representing the 53 Commonwealth countries, and the elaborate floral decoration on the veil took a staggering 500 hours to embroider.

She had “two or three” meetings with Claire, looking at sketches and discussing ideas to make the flowers come to life.

“After those, I trusted her implicitly, and I didn’t really see it until the morning of,” she added.

Meghan’s tiara, the Queen Mary tiara, was borrowed from the Royal Family’s jewellery collection and could’ve been her “something old” and “something borrowed” element.

The Duchess of Sussex’s headpiece was an Art Deco-style diamond encrusted band that, in Meghan’s own words, appealed to her because it was “incredibly timeless but still [felt] modern”.

The tiara is comprised of a flexible band of 11 different sections, each covered in large and small diamonds.

The diamond tiara’s main focal point is a detachable brooch with a centre stone surrounded by nine smaller diamonds.

Traditionally, the tiara has been spotted with a sapphire as the centre stone, but Meghan opted to swap the blue jewel out for a diamond instead – which was also lent to her by Queen Elizabeth II.

The tiara Meghan wore, was apparently not the one she initially chose. Rumours suggest Meghan’s first choice was the Greville Emerald Kokoshnik tiara, also known as the Russian emerald headdress, that Princess Eugenie wore for her wedding later the same year.