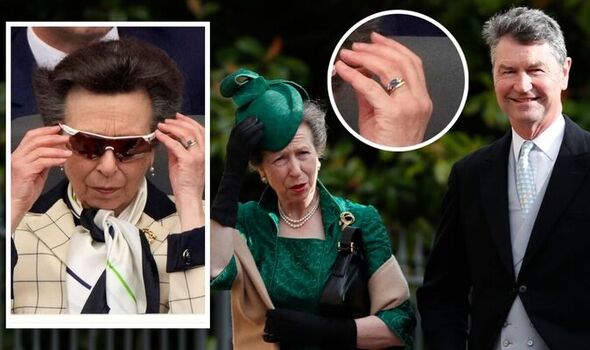 Today is Princess Anne’s wedding anniversary, as the Princess Royal tied the knot with Timothy Laurence exactly 30 years ago on December 12, 1992. What does her engagement ring look like?

This royal wedding occurred 49 years since ago, but unfortunately the relationship did not last and the couple divorced in 1992.

But Anne married again on December 12, 1992, after falling in love with her current husband, Timothy Laurence.

To celebrate the royal couple’s wedding anniversary, jewellery experts at UK retailer Steven Stone have shared important information about the incredible engagement rings that the Princess Royal has received in her lifetime.

While most brides-to-be receive a diamond for their proposal, such as the late Queen Elizabeth and also Meghan Markle, Princess Anne received stunning sapphires instead.

Because of their rich colour and durability, sapphires are becoming an increasingly popular stone for engagement rings.

“Blue sapphires are often linked to people who are respectful, loyal, hardworking, and honest, which only makes these rings even more special, and suggests that this could have meant something to Princess Anne.

“Princess Diana also famously had a blue sapphire ring, which is now in the hands of Kate Middleton, whilst Queen Elizabeth II was frequently seen sporting the gemstone on her famous brooches.”

Royal women are often covered in sapphires, such as Queen Camilla who donned the Belgium Sapphire tiara at the Diplomatic Reception last week.

Mr Stone added: “It’s clear to see that the Royal Family are huge fans of sapphires – a stone which is traditionally believed to attract abundance and blessings.

“Historically it has been used to protect against negative energies, as well as calm the mind, strengthen intuition, and invite spiritual clarity, so it’s no wonder the royal ladies love them.”

The Princess Royal’s ring from Mark Phillips has a huge oval sapphire diamond in a cabochon setting in the centre, surrounded on either side by a pair of dazzling diamond side stones.

It is traditionally set on a yellow gold band, using welsh gold, like most royal rings. Steven Stone experts estimate it to have a value of around £10,000.

In 1973, Princess Anne and Mark Phillips became secretly engaged in the springtime, during a holiday over the Easter break. However, they didn’t announce their engagement until over a month later, when they stood for cameras outside Buckingham Palace for the first time on May 30, 1973.

Princess Anne, an avid equestrian, met the Olympic gold rider at a party in 1968, and the two became friends over their shared passion for horses. Royal jeweller, Garrard, created Princess Anne’s engagement ring “to her specifications”.

Princess Anne’s second engagement ring contains a three-carat oval-cut cabochon sapphire, framed by a cluster of three small diamonds on either side.

According to Steven Stone experts, on today’s market, a ring like this would be worth around £25,000.

Blue sapphires are often linked to people who are respectful, loyal, hardworking and honest – all qualities that the Princess Royal possesses.