Barring admission to medical school or catastrophic injury, most of us will go our whole lives without much contemplating the grisly framework that enables and constrains our bodily movement. This is for the best.

It is alarming to understand oneself as a heavy, precarious pile of discrete muscles adhering to bones and skin, performing rote motions with little to no supervision, rather than as a person with ideas. 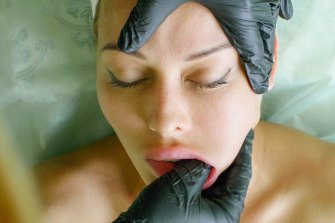 It feels like being alternately treasured and ravaged, pulled and gently slapped and firmly pressed.Credit:iStock

But what if, in exchange for subjecting yourself to that existential reckoning, you could pay to have zhuzhed cheeks and a temporary glow? Would you dare?

For an increasing number of Brooklyn residents in the US for whom any price is a small price to pay for any good or service, the answer is a radiant yes.

The result is what the aesthetician Carrie Lindsey describes as a "non-surgical face-lift." In her small, bright salon, Lindsey methodically rearranges the clay of her clients' features until they resemble their own almost imperceptibly more attractive evil twins. She achieves this effect by smushing and smooshing and spreading and stretching their faces, for upward of an hour, and then (having donned gloves) rooting around inside their mouths for several minutes.

Lindsey, who has never been bitten by a client, first became aware of so-called Sculptural Face Lifting in late 2018, from a former employee trained in a similar technique.

After she got training and began sharing post-treatment photos of her faintly luminous, delighted clients, demand exploded.

"I have three tomorrow," Lindsey said, drinking hot chocolate on a bench near her salon on a recent afternoon.

In January, Girls actress Jemima Kirke uploaded a video of Lindsey pulling Kirke's lips as wide as those of a cartoon character struggling to walk into a powerful wind, exposing the rarely seen far away teeth used to grind food into a swallowable paste.

"And this is going to make me gorgeous?" Kirke asks in the video, attempting to form words around Lindsey's fingers.

It feels like being alternately treasured and ravaged, pulled and gently slapped and firmly pressed, like pizza dough that has dropped on a human skeleton and now must be rubbed into the skeleton to hide this mistake.

It was chillingly relaxing. My session seemed to have lasted less than 10 minutes, yet when I checked the time upon its completion, 80 minutes had passed, and I had been awake for all of them. It felt how autonomous sensory meridian response sounds, except that it was also intermittently briefly uncomfortable. The total amount of times my face will be touched in my lifetime surely increased by something like two million percent.

Before and after photos revealed that my skin no longer sagged in places I hadn't known it sagged, until I saw photos in which it no longer did. It was as if my regular skin had received the unhelpful note "do better" and acted on it, but not in any specific way I could identify. I was my own mirage.

After an initial assessment, during which she scrutinises what she calls "the knit" of her supine client's skin, Lindsey begins the treatment by pressing gently around the clavicle, underarms and jawline — locations of lymph nodes. She works her way more forcefully up the neck to the face, where the pressure becomes muscle deep. The movements, she said, are intended to encourage activity in the lymphatic and circulatory systems, to "feed" the skin.

"I'm not feeding it just topically with, like, a mask or a serum," she said. "Your body's feeding your new skin cells. And I think that that's great."

"Risorius.""Buccinator." More than a dozen face muscles are identified, personalised —"your orbicularis oris"— described, and rubbed.

"It's very rhythmic to me," she said of the repeated kneadings. "It's almost like a dance."

Lindsey said that the biggest "drawback" to the treatment is that "it is done best in a series." She estimated that clients augmenting their sessions with "at home care," may be able to maintain their results for "a good week or two." My results, without home care, seemed to fade after a day or so.

But for that day or so, my skin looked great. And who can put a price on that?

Similar treatments, often known as buccal facials or buccal massages, are available in Australia. Most well-known is the treatment at Sydney clinic The Dermal Diary, costing AU$400 including a first-time consultation. Melbourne facial clinic Beauté also offers the treatment.