BAFTA 2021 Film Awards: Celeste misses the fashion mark in a pleated glove dress as she joins Emerald Fennell and Corinne Bailey Rae on the worst-dressed list

Awards nights usually provide a chance for celebrities to indulge in an ultra-glam look and flaunt their enviable designer frocks.

However, Sunday’s BAFTA 2021 Film Awards featured a rather underwhelming display of fashion with many stars opting for low-key or eyebrow-raising looks that didn’t quite hit the mark – and few deciding to don their ballgowns at home.

During the night, singer Celeste, 26, performed an incredible rendition of Hear My Voice from film The Trial of The Chicago 7, however her red carpet ensemble of a green puffed-sleeve pleated dress with built in gloves hit a bum-note.

Not quite hitting the mark: Sunday’s BAFTA 2021 Film Awards featured a rather underwhelming display of fashion (left, is Celeste in a deep green gown, middle, Emerald Fennell in all-white, and right, Corinne Bailey Rae in boots)

Celeste looked incredible as she arrived at the Royal Albert Hall rocking a glamorous touch of makeup and drop earrings.

But her dress did little to flatter her sensational figure, instead boasting a quirky black detailing across the chest and stomach and mesh netting on the skirt.

The ensemble also featured a square neckline and extra long sleeves which turned into gloves to cover the beauty’s hands.

After walking the star-studded socially distanced red carpet, Celeste slipped into her second look of the night – a floaty floral number.

She looked ethereal as she delivered a powerful performance of Hear My Voice in the high-neck lilac gown. 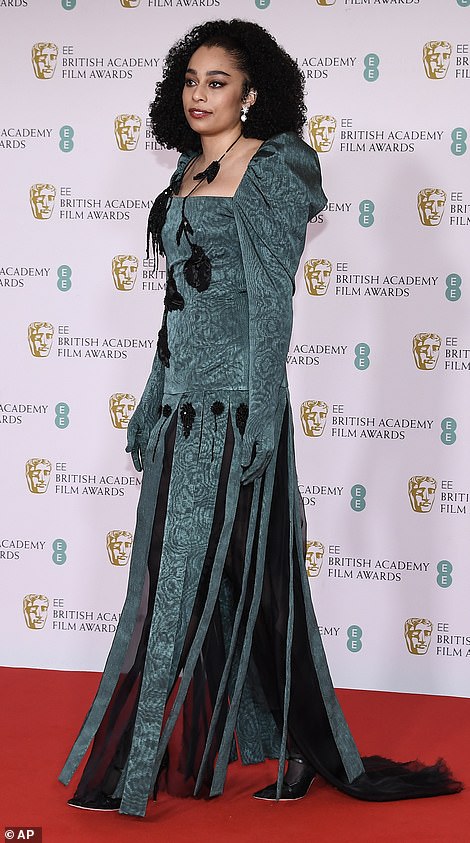 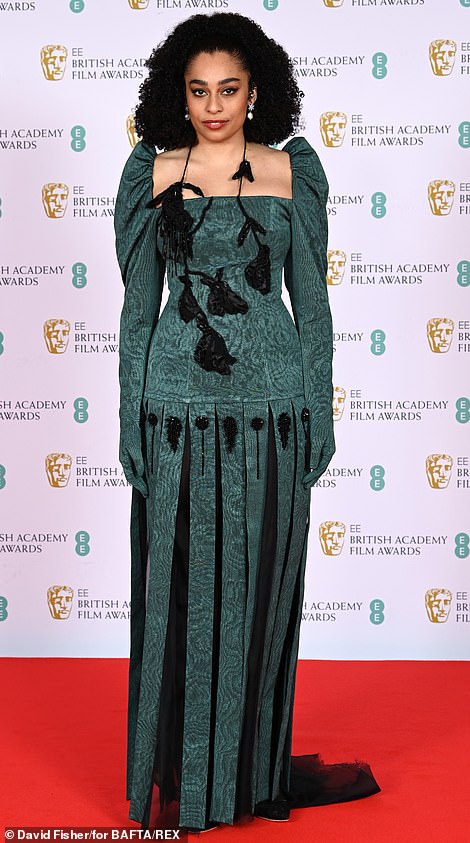 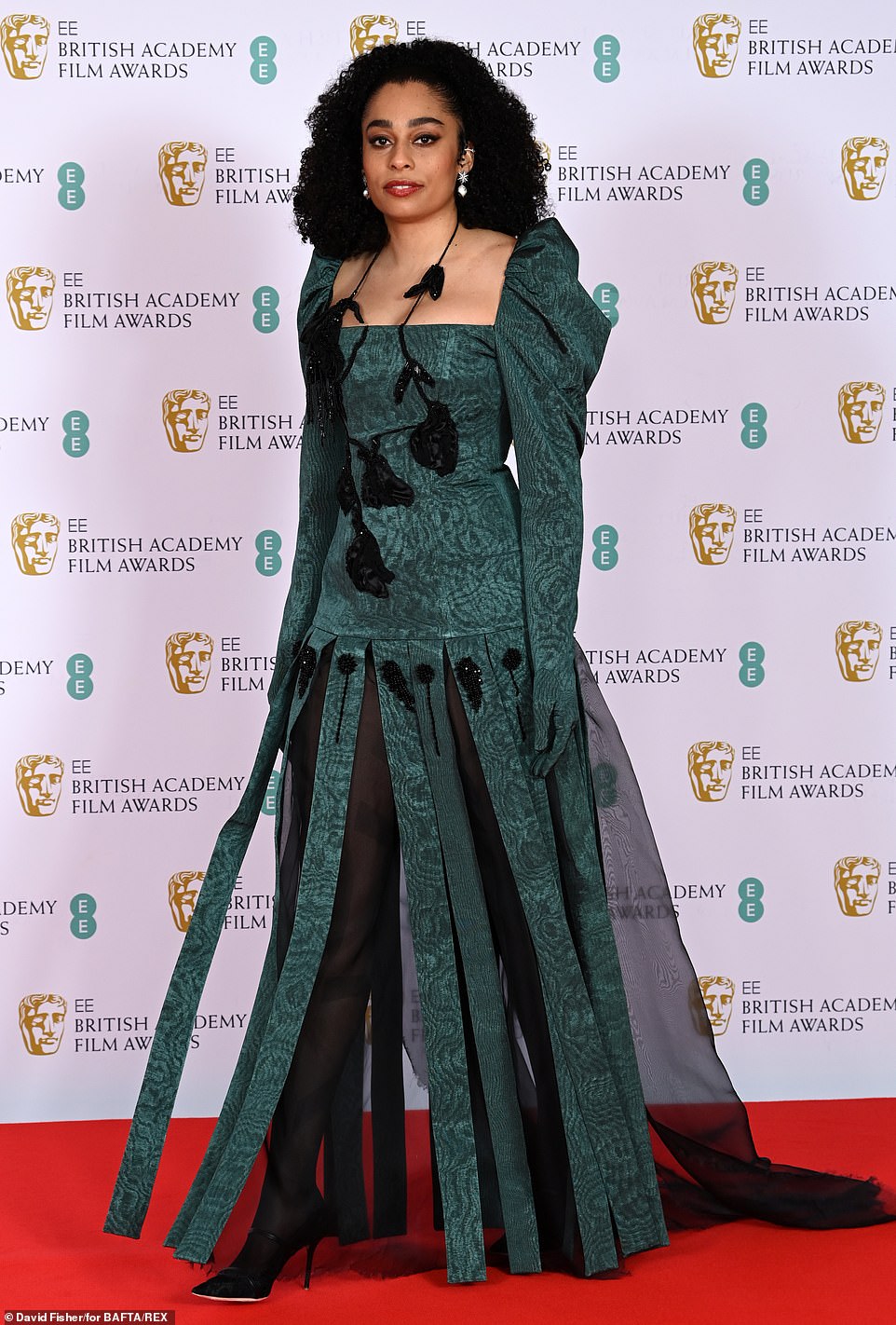 Standout: The beauty paired her gown with black tights and heels as well as some earrings

Singer Corrine Bailey Rae, 42, looked quirky as she arrived at the BAFTA 2021 Film Awards in a pair of studded shiny black heeled boots.

Corinne posed for the cameras in the strappy number which also featured a puffy skirt and was cinched in at the waist to show off her figure.

Fashion: Corinne Bailey Rae posed for the cameras in the strappy number which featured a puffy skirt and was cinched in at the waist to show off her figure 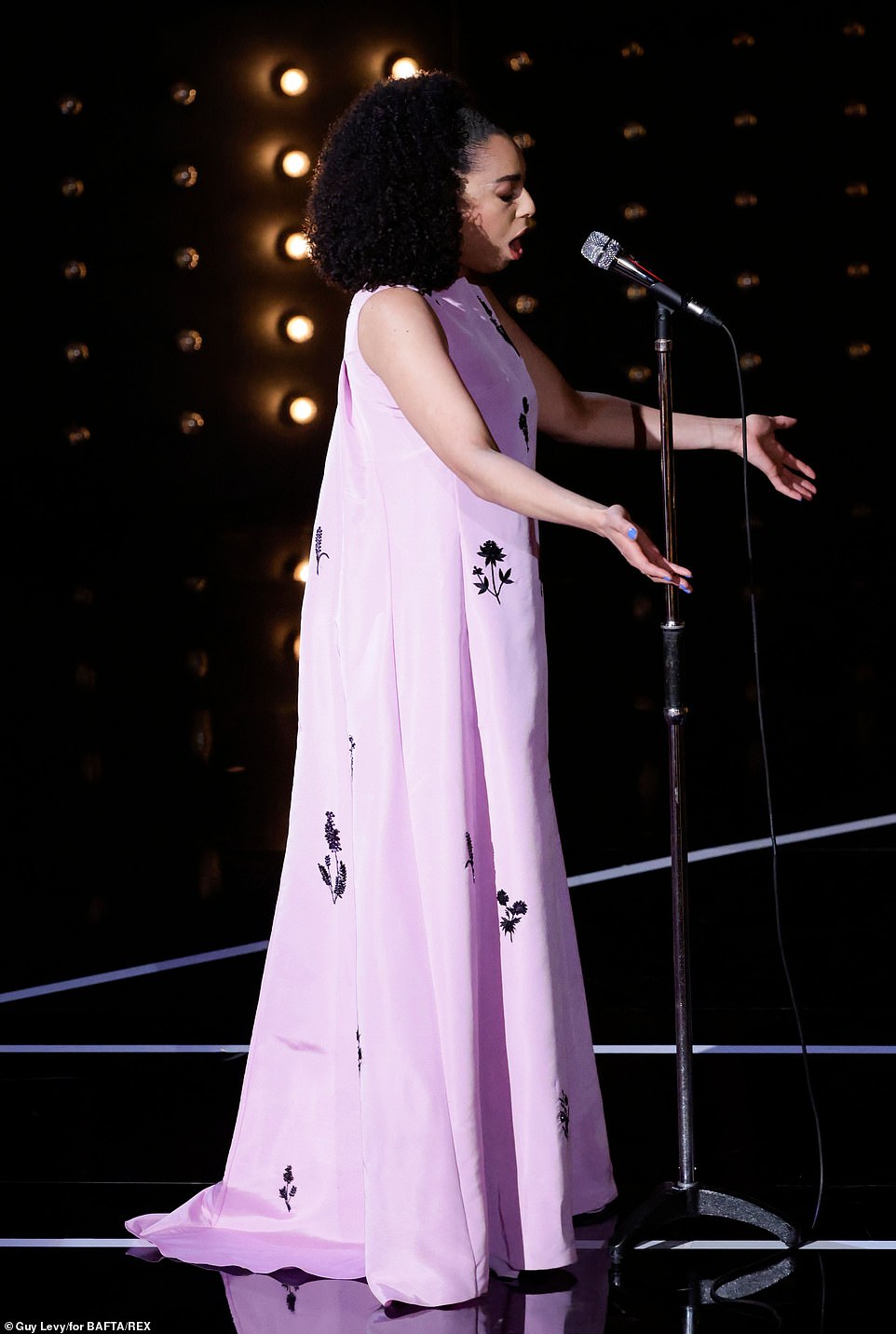 Second look: After walking the star-studded socially distanced red carpet, Celeste slipped into her second look of the night – a floaty floral number

Emerald, who won two gongs for her film Promising Young Woman, shared a snap of her look to Twitter after appearing via video link on the night.

Her white gown featured semi-sheer sleeves and a layered effect across the chest before flowing into a floor-length skirt.

The blonde beauty paired her ensemble with some pointed shoes and added a splash of red lipstick to brighten up her look. 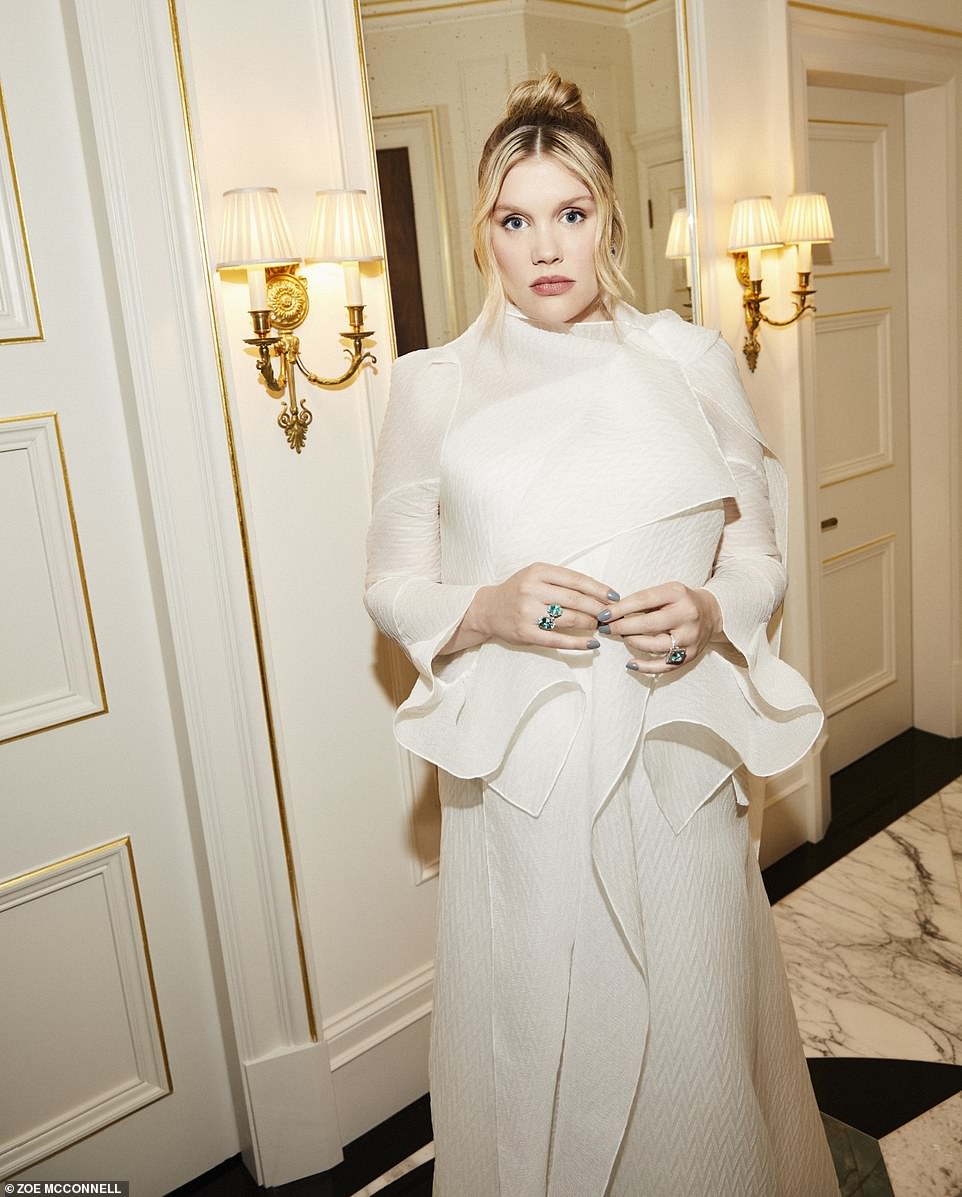 Fashion: Emerald, who won two gongs for her film Promising Young Woman, styled her blonde locks back into a chic style with two strands at the front to frame her face 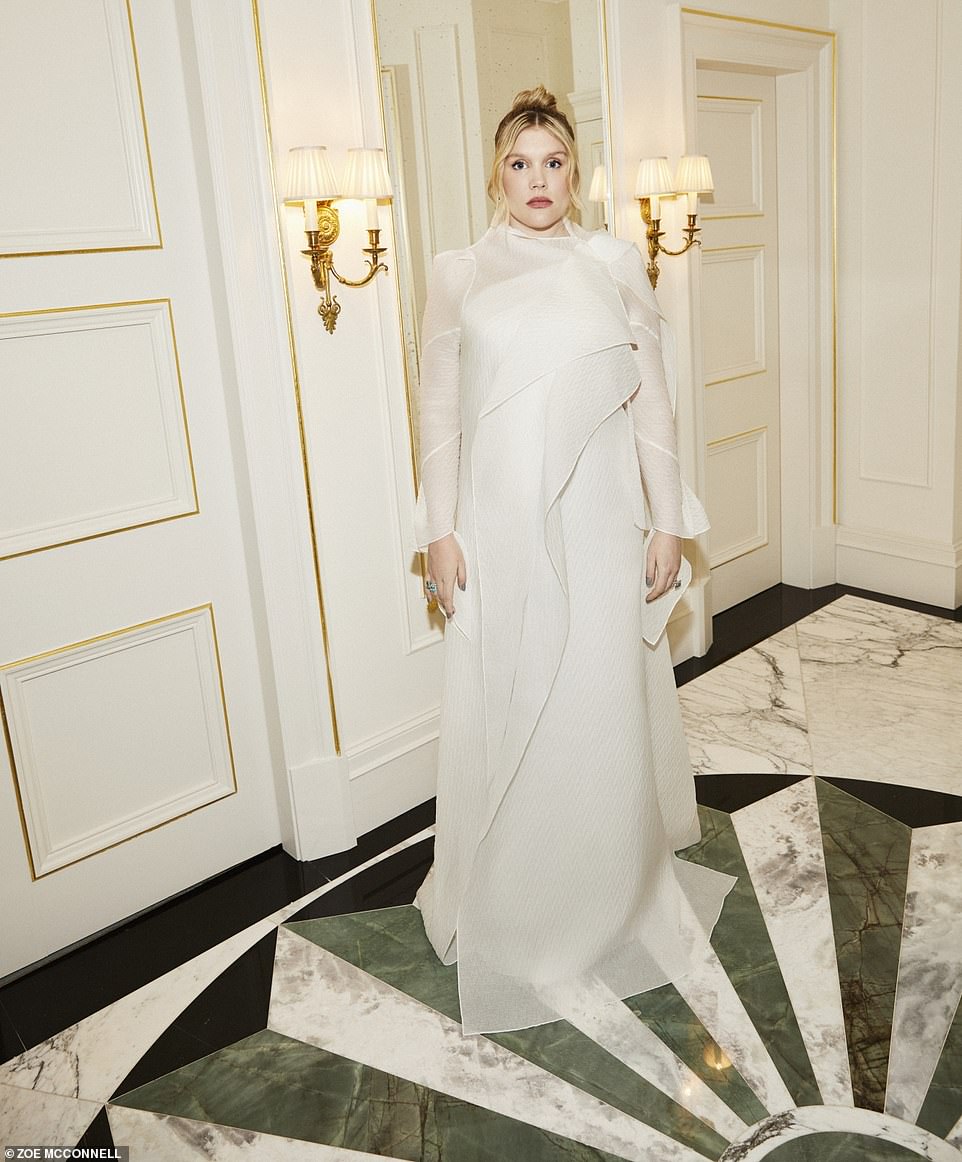 Bright: The director added a splash of colour to her look with a slick of lipstick

Also joining the talented women was Sophie Cookson, 30, who opted for a simple look on the night that proved to be underwhelming on the red carpet.

Her frock of choice featured full sleeves and embellished tasselled shoulders, adding a touch of pizzazz to her otherwise demure look.

She also kept things straight-forward with her hairstyle on the big night, sweeping her blonde locks back into a messy bun.

The 2021 BAFTAs saw Frances McDormand win the leading actress gong for her role in Nomadland while Anthony Hopkins was named as best actor for The Father.

Other winners on the night included Daniel Kaluuya as supporting actor in Judas and the Black Messiah and Korean star Yuh-Jung Youn in the supporting actress category for film Minari.

The BAFTA and EE British Academy Film Awards 2021 was also the first of the Academy’s film ceremonies to be held virtually.

The TV version of the awards show took place online during summer 2020, but last year’s film ceremony managed to go ahead a month before the Covid pandemic forced the UK into lockdown. 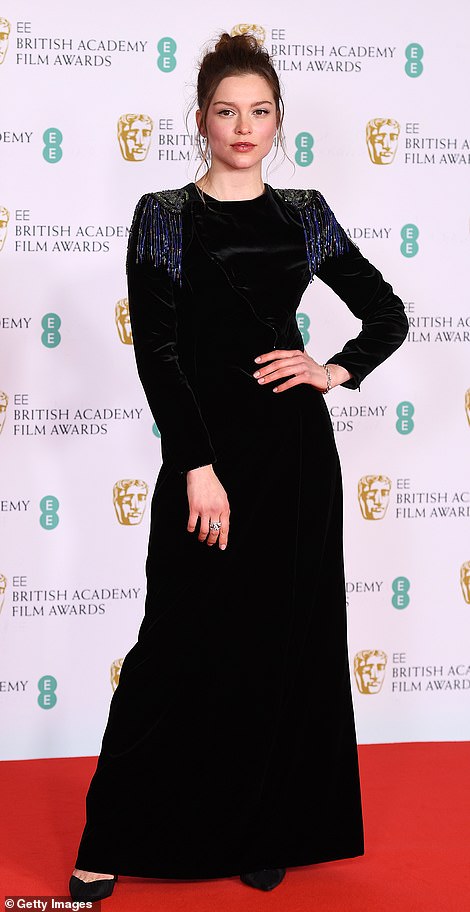 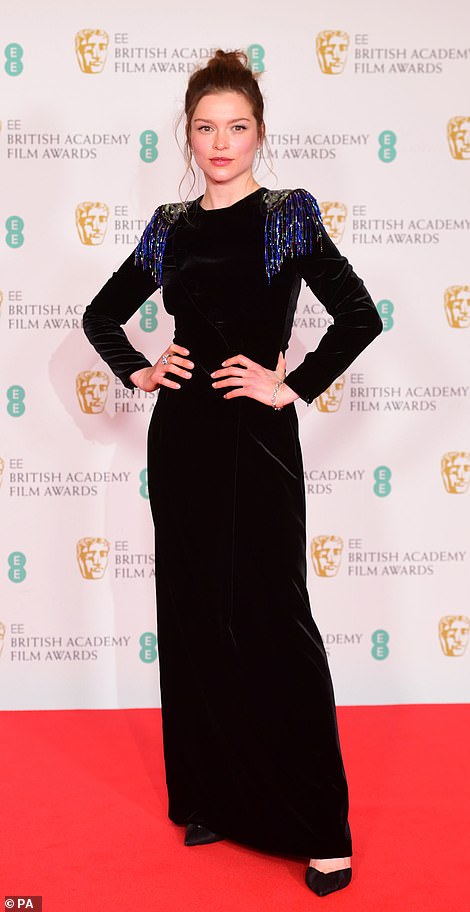 Classic: Sophie Cookson, 30, opted for a very simple black dress and heels look on the night that proved to be underwhelming

With the pandemic still raging, another change will take place this year: the BAFTAs will happen in two parts.

Both shows, recognising the very best in film of the past year, will be broadcast virtually from London’s Royal Albert Hall. The first show celebrates the craft of film while the second main show will feature the mainstream awards.

Show one was hosted by Clara Amfo on Saturday night and saw eight of the 17 gongs awarded.

During the broadcast it was revealed that Ma Rainey’s Black Bottom won two awards: Costume Design and Make Up & Hair. 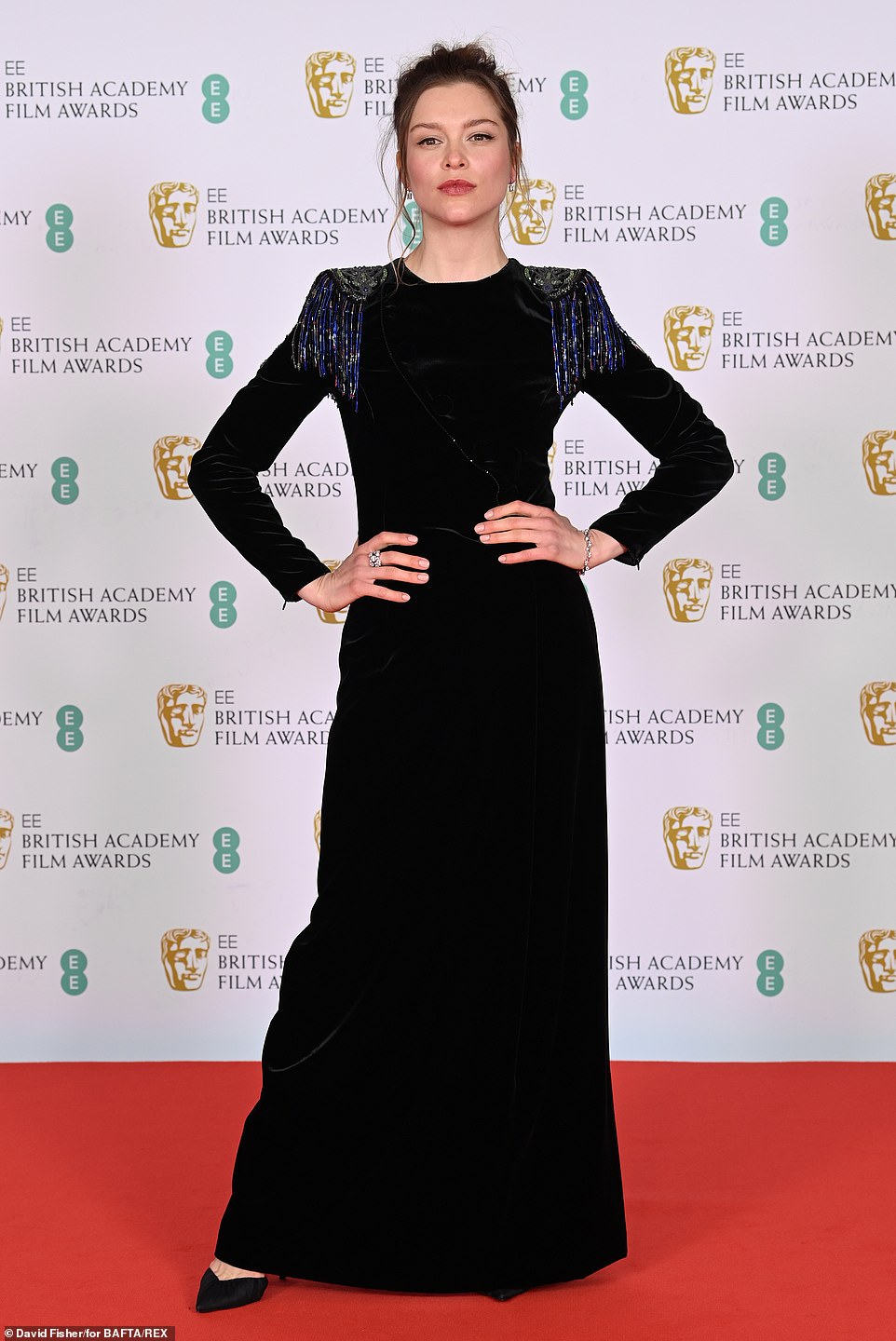 Vamping it up: She also kept things straight-forward with her hairstyle on the big night, sweeping her blonde locks back into a messy bun

Show two is fronted by Dermot O’Leary and Edith Bowman from London’s Royal Albert Hall where the acting prizes will be given out. No audience will be present.

Both programmes are being broadcast in all major territories around the world and a total of 50 feature films received nominations this year.

VANESSA KIRBY Pieces of a Woman

MADS MIKKELSEN Another Round

THE TRIAL OF THE CHICAGO 7 Stuart Besser, Marc Platt

OUTSTANDING DEBUT BY A BRITISH WRITER, DIRECTOR OR PRODUCER

FILM NOT IN THE ENGLISH LANGUAGE

ANOTHER ROUND Thomas Vinterberg

THE TRIAL OF THE CHICAGO 7 Alan Baumgarten

THE OWL AND THE PUSSYCAT Mole Hill, Laura Duncalf – WINNER

ANOTHER ROUND Tobias Lindholm, Thomas Vinterberg

THE TRIAL OF THE CHICAGO 7 Aaron Sorkin

NEWS OF THE WORLD Dariusz Wolski

THE ONE AND ONLY IVAN Santiago Colomo Martinez, Nick Davis, Greg Fisher