Award-winning star Kristin Scott Thomas is delighted that people will still get to hear her sing in the Military Wives feature film, even though its cinema release was cut short by the coronavirus outbreak.

Scott Thomas plays Kate, the colonel’s lady who, with other wives on an army base — including fellow star Sharon Horgan — set up a choir.

The picture, a first-class weepie that will make you laugh as well, opened in cinemas on March 6, just as the country was getting jittery about Covid-19.

Inspired by Gareth Malone’s BBC documentary The Choir: Military Wives, it was due to have a digital release in the autumn. But that has been fast-tracked by producer Rory Aitken and distributor Lionsgate, and it’s available now for downloading on demand. Aitken told me that all the film’s artists gave their approval for the movie to be available in living rooms. 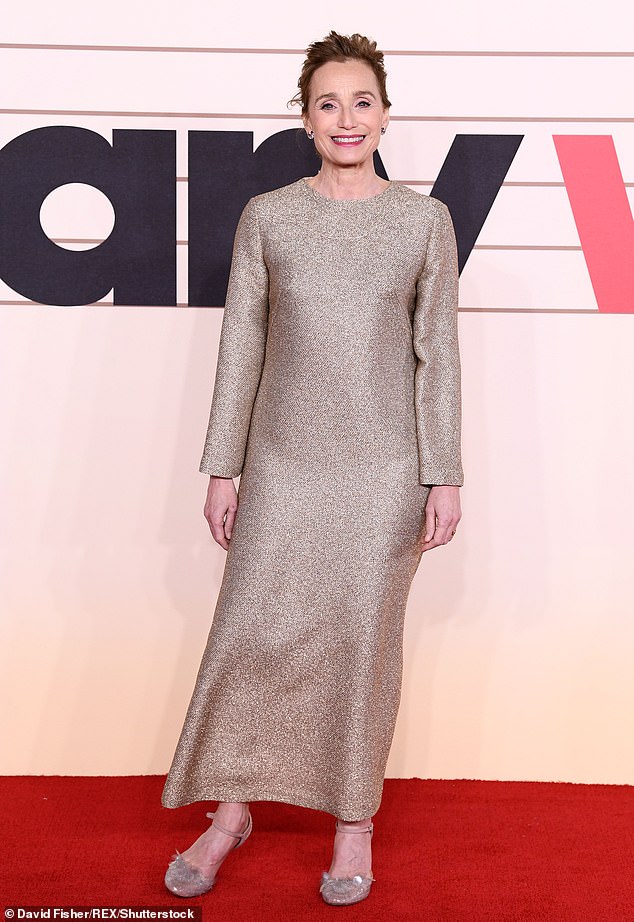 Kristin Scott Thomas plays Kate in her Military Wives feature film, the colonel’s lady who, with other wives on an army base — including fellow star Sharon Horgan — set up a choir

‘We’ve been in touch with Kristin and Sharon and, like everyone else, they’re at home. They’re very excited that the movie can live on, and that people can hear them sing,’ said Aitken, who produced Military Wives with Ben Pugh.

‘Perhaps it’s not living on in the way of having a really good run in cinemas,’ he added, ruefully. ‘But it can actually reach people all over the country at a time when they can’t get out.’

He dismissed rumours of a sequel. ‘At this point I think everything’s uncertain. We need to stay focused on this film first,’ he said.

When I interviewed Scott Thomas recently, she told me she could ‘carry a tune’ and was ‘eager’ for people to hear her hitting some top notes.

Producer Aitken also helped usher the Julian Fellowes series about the origins of football, The English Game, onto Netflix. All six episodes are available on the streaming service now.

Sky’s the limit for Edgy winner

The people of Sheffield clearly have a great love for Standing At The Sky’s Edge, the superb musical featuring music and songs by Richard Hawley.

The show, which returns to the city’s Crucible Theatre in November for a six-week season, has been selling advance seats like gangbusters.

Sky’s Edge, set in Sheffield’s iconic but brutalist ‘streets in the sky’ Park Hill estate, will run from November 30 through to January 9. 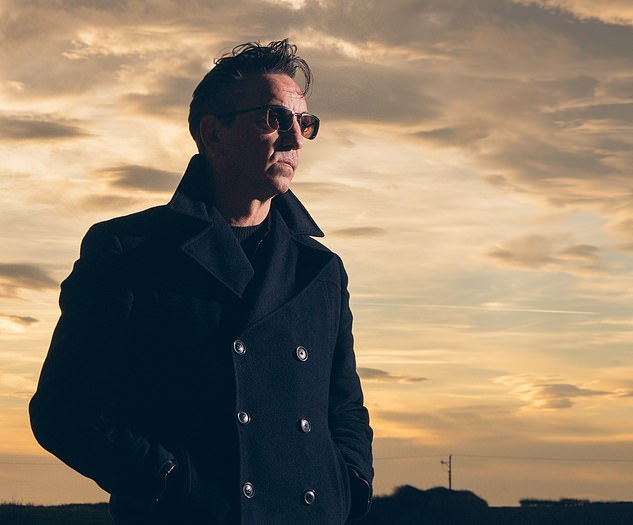 The people of Sheffield clearly have a great love for Standing At The Sky’s Edge, the superb musical featuring music and songs by Richard Hawley

Hawley and book writer Chris Bush, both Sheffield natives, are working with director Rob Hastie (who is also the artistic chief of the Sheffield Theatres) and choreographer Lynne Page on slight revisions — including the addition of another of Hawley’s songs — for the forthcoming production.

The original storyline followed the disparate residents who lived in one of the flats from the 1960s to 2016. The plan now, however, is for it to continue on to the December 2019 election, in which Boris Johnson won a landslide.

The show, which is all about a sense of community, is perfectly suited to our times. So it’s fitting that its producer, Rupert Lord, has done a deal with the National Theatre, which will transfer it to its structure on the South Bank later in January — though dates could change because of the upheaval caused by the coronavirus lockdown.

Even so, it’s vital that Sky’s Edge, with Hawley’s haunting songs, should be seen by a larger audience. It won several awards — most recently honours at The Stage newspaper’s The Stage Awards (for which I was a juror).

Teddie-Rose Malleson-Allen has plenty to keep her occupied during the lockdown. There are her Spanish, French and Italian lessons; books to read; a trampoline to bounce on; Joe Wicks exercises on You Tube every morning ‘with yoga mats on the floor’; and feeding the pet pig.

‘Feed the pig!’ I exclaimed when I asked the 13-year-old (14 next week) star of Sky Cinema’s Four Kids And It whether she had any pets.

‘I have a pig called Harrison. He’s massive,’ she said. ‘If I’m 5ft 3in, he’d probably be three quarters the size of me.’

The eight-year-old Kunekune domestic pig has a taste for banana peel and pig nuts, though Harrison (named after a young friend) is not very particular about what he eats. 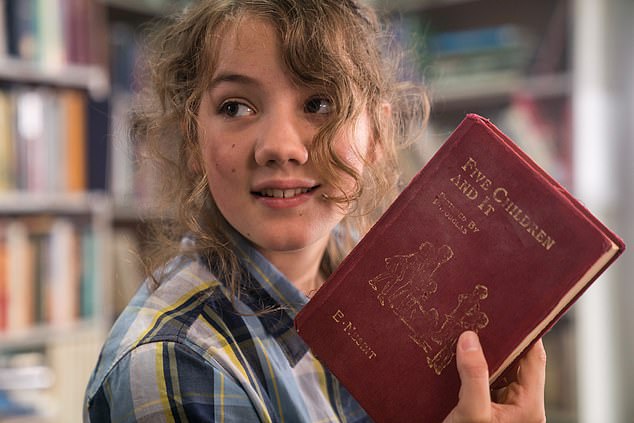 Teddie-Rose Malleson-Allen has plenty to keep her occupied during the lockdown, including E. Nesbit’s Five Children and It (pictured)

Once, when Teddie-Rose was out with her parents — the actors Tamzin Malleson (pathologist Kate Wilding in Midsomer Murders and Dr Kate Brady on Always And Everyone) and Keith Allen (Trainspotting and many other movies) — Harrison got into the family’s South Cotswolds farmhouse, which was being painted.

‘He’s very destructive, so he can’t come in,’ Teddie-Rose prefaced before explaining further: ‘We came back and he had a half-eaten bar of soap in his mouth.’

She joked that he might have been trying to wash his hands.

‘He was covered in acrylic paint, so he was white for a few days,’ she said.

Harrison, besides being very large, has tusks that need to be removed every now and then.

Teddie-Rose also has two cats, Toffee and Ninja — but she herself prefers to be called just Teddie. ‘No one ever calls me Teddie-Rose,’ she said, ‘unless Mum’s mad at me.’

Teddie, who also appeared in the BBC TV film Cider With Rosie and the movie of Swallows And Amazons, filmed Four Kids And It, Sky Cinema’s splendid film adaptation of Jacqueline Wilson’s best-selling book, on location in Ireland, which was standing in for Cornwall. 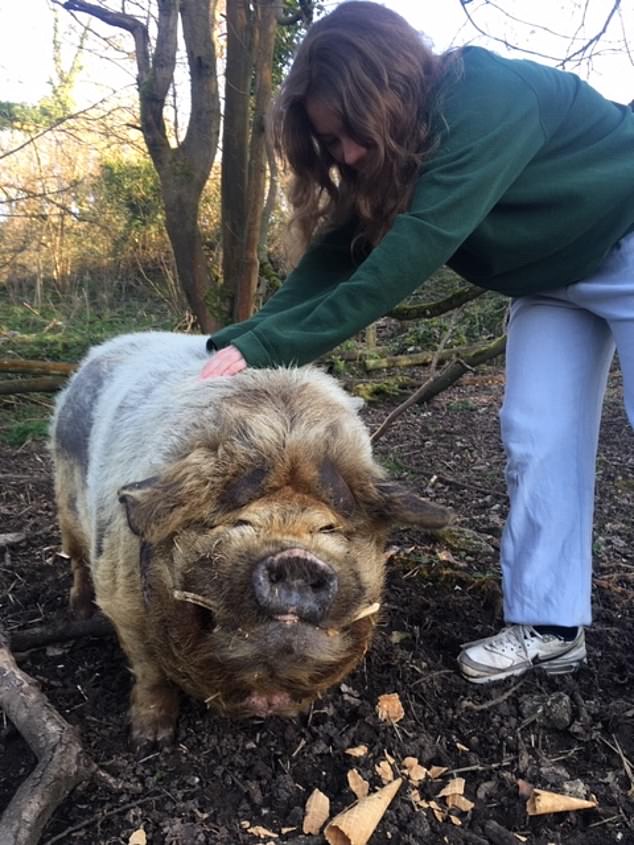 ‘I have a pig called Harrison. He’s massive,’ she said. ‘If I’m 5ft 3in, he’d probably be three quarters the size of me’

The story, based on an original 1902 book by E. Nesbit, is about four children, played by Teddie, Billy Jenkins, Ashley Aufderheide and Ellie-Mae Siame, who discover a magical ‘sand-sprite’ (voiced by Michael Caine) that can grant wishes. Matthew Goode and Paula Patton play the parents of the disparate offspring, and Russell Brand is the greedy local landowner.

‘We were all very close on set,’ Teddie said of her young co-stars. They enjoyed spending time together when they weren’t filming, though it was disconcerting for them to be hanging out as a group one minute and the next be told: ‘OK, you need to be in a fight now — pretend to hate each other.’

The film, available on Sky Cinema from today, is an enjoyable family romp with special effects including flying children. ‘It was terrifying but really fun flying,’ Teddie told me.

One highlight during the shoot was a surprise, courtesy of the film’s baddie, Brand.

‘He brought an ice-cream truck on set,’ Teddie exclaimed. ‘He actually drove the truck himself, with jingles going very loudly. It was a hot day, so it was needed,’ she said.

In recent days, her mother has been home-schooling her and she is wired into apps that her school has set up. ‘I pretty much end up speaking Spanish to myself,’ she said.

She loves reading and admits she was ‘obsessed’ with the Harry Potter books, which she read when she was seven: ‘My mum had to lock them away so I could read other stuff.’

Next week Teddie will have her 14th birthday, celebrating remotely with her friends. ‘We can have multiple people Face-Timing so I’ll probably speak to my friends for a few hours.’

Teddie asks her mother if there will be a cake and candles in the background.

And there’s not much clearing up after a virtual party.

Unless Harrison invites himself in, that is.

Actors Helen McCrory and Damian Lewis joined forces with Leon and several other restaurant chains to launch the #FeedNHS push, and by Monday 250 hot meals had been delivered to hospital staff in London.

On Wednesday that had risen to 1,000 meals; today it’s 6,000. The couple, self-isolating in Suffolk with their two children, have been on the phone 24/7. ‘A lot of it is just connecting people,’ McCrory told me.

Now they have set up a website — www.feednhs — ‘as a forum for the NHS and restaurants to get in touch with each other. We want it to inspire people to do the same in their areas’. 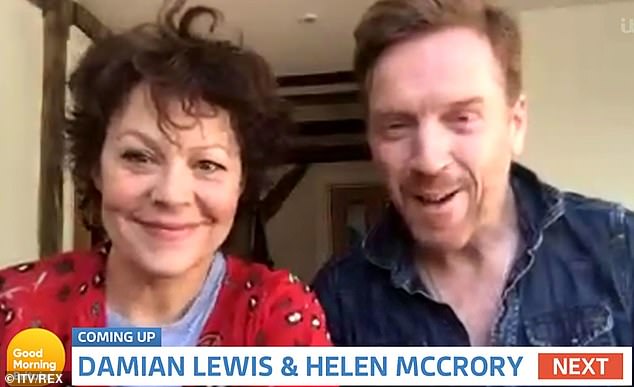 Merritt Wever and Domhnall Gleeson star in the sublimely droll new HBO American TV comedy Run, written by Vicky Jones, who was a force behind Fleabag and Killing Eve and directed the stage version of Phoebe Waller-Bridge’s comic creation.

Those credentials may give you an inkling of the dark wit baked into this tale of two ex-lovers who made a pact, back in their university days, to run away together if either of them sent a text with the code word Run.

Trouble is, Gleeson’s character sent the emergency message to Wever by mistake. The antics that follow are outrageously wicked. 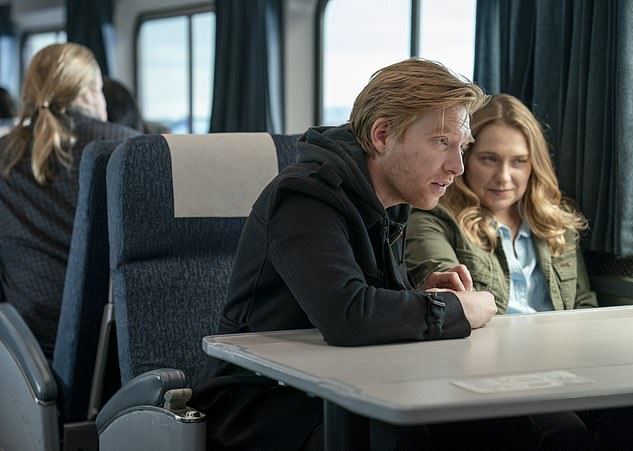 Wever has the comical grace notes of Judy Holliday and Judi Dench (circa As Time Goes By) combined with an adrenaline-laced injection of Waller-Bridge’s irreverent humour (she, by the way, makes an appearance in two episodes).

Eagle-eyed film-watchers will remember Wever’s brief but scene-stealing turn as a family welfare officer in Noah Baumbach’s Marriage Story, which can be found on Netflix. She also made her mark, with Toni Collette and Kaitlyn Dever, as a detective in the drama Unbelievable.