Ben Affleck and Ana de Armas are dating and confirmed their romance with a passionate kiss during their getaway to Cuba, a new report is claiming.

The pair, who became close after filming their ‘sexual’ thriller Deep Water were seen ‘making out in the airport’ before boarding a private jet out of the country, according to People.

‘They are definitely dating,’ a source told the outlet, days after the couple were seen smiling and laughing around Havana. 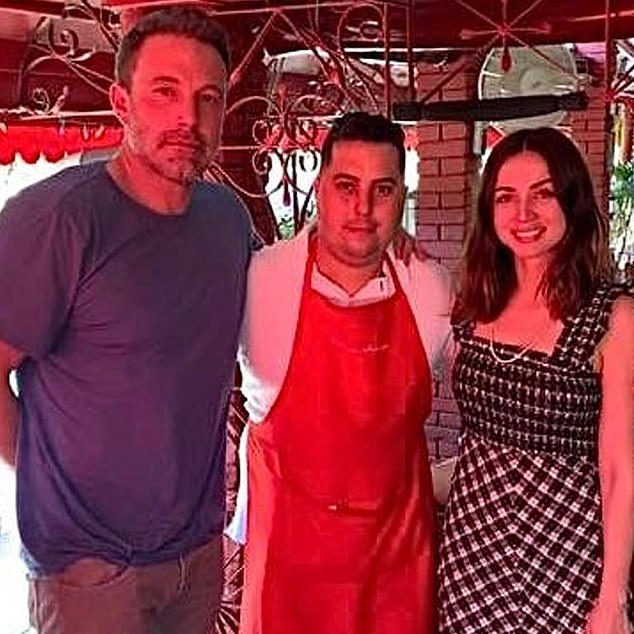 When in Cuba! Ben Affleck and Ana de Armas ‘are definitely dating’ according to a new report. They became close after filming their ‘sexual’ thriller Deep Water

On Thursday, the two stars were seen dining together in Havana at a cozy restaurant. And the photogenic duo were also seen chatting while walked around the picturesque town, even stopping in a market at one point.

The 47-year-old ex-husband of Jennifer Garner, with whom he has three children, has just come off weeks of promoting his film The Way Back, which opens Friday.

Armas is a rising star. The 31-year-old brown haired beauty was just in Knives Out. She can next be seen in Blonde, where she plays Marilyn Monroe. 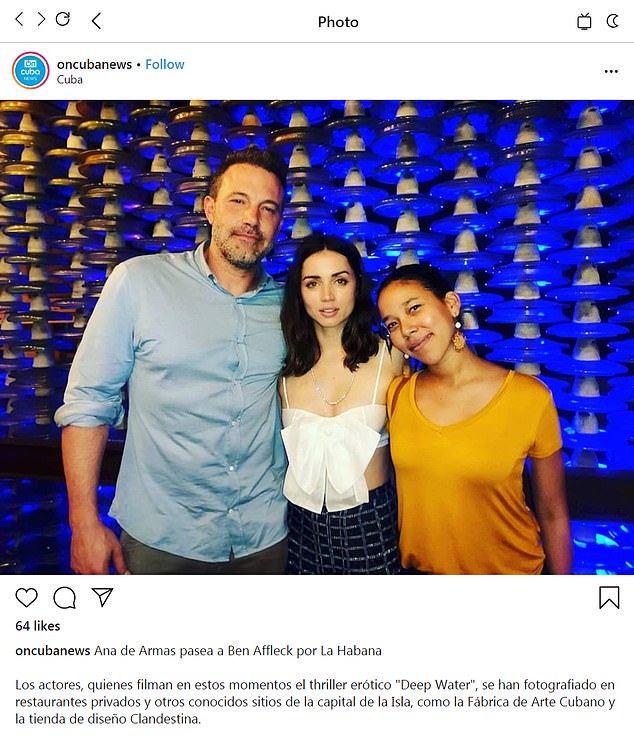 And now with a new friend: Here the 47-year-old actor and the 31-year-old actress was photographed with a fan

And the looker will be the ‘Bond girl’ in the new James Bond movie No Time To Die, which has had its release date moved to November due to coronavirus fears.

They were seen by fans who took photos of the pair while enjoying Cuba.

And they were also seen dining at the restaurant La Corte del Principe. Ben is fluent in Spanish, which no doubt came in handy. 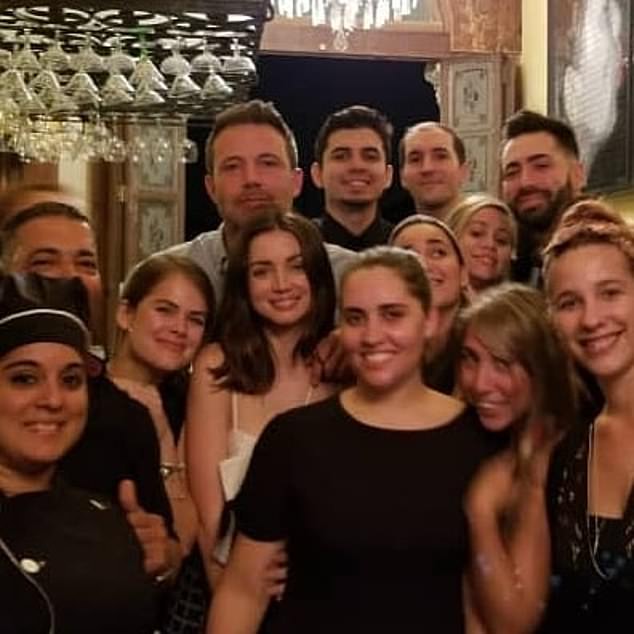 So many amigos! And in this image it looks like the whole restaurant joined in

One of the employees of the establishment shared a photo with Affleck and de Armas.

Weeks ago they finished filming their new movie Deep Water. They were last seen on set together in mid February. 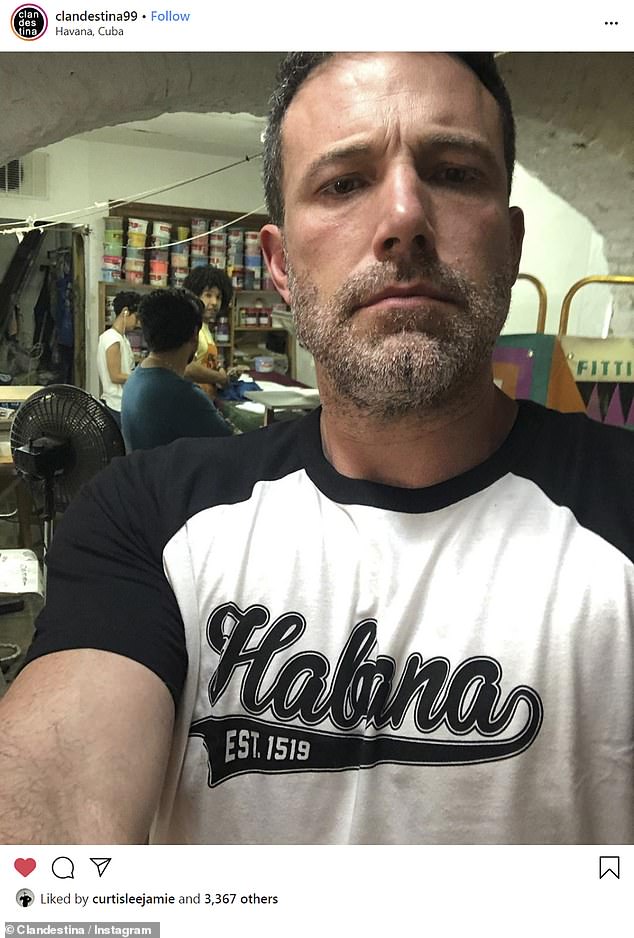 Another look at the Oscar winner: Here Ben looked like a tourist in his Habana T-shirt Chatting it up: Ana and Ben were chit chatting inside a shop when this person took a snap

Director Lyne is known for his over-the-top and sometimes graphic sex scenes from 9 1/2 Weeks with Kim Basinger, Fatal Attraction with Michael Douglas, Indecent Proposal with Demi Moore and Unfaithful with Diane Lane.

They filmed in New Orleans for months and often were seen on set together. 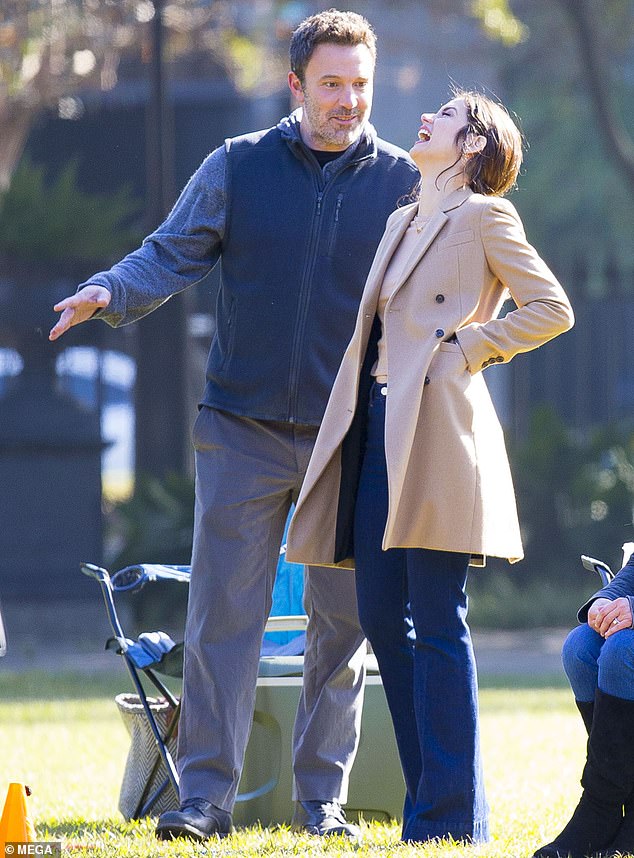 They click well together: Ben laughed it up with Ana when shooting Deep Water in Louisiana in mid November; they did reshoots as recently as mid February

The film is set to be released on November 13.

In January a fan said they were seen together in New Orleans at a bar when the cameras were not rolling.

‘Ben Affleck right behind me spitting game to Ana de Armas in Spanish all night long is a vibe,’ wrote a fan.

He split from his last girlfriend, SNL producer Lindsay Shookus, in 2019.

Before that he was linked to several models, one who worked for Playboy.

Her career is doing very well: Here the siren is seen in the James Bond movie No Time To Die which will come out in November 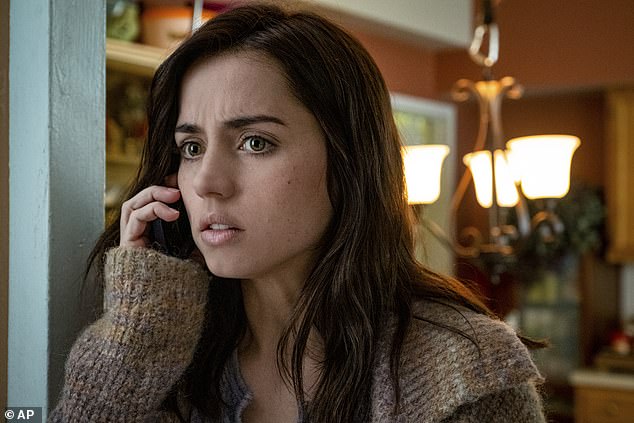 Now without makeup: And the actress was seen in the hit movie Knives Out

And before he wed Garner- with whom he has kids Violet, 14, Seraphina, 11, and Samuel, eight – he dated Jennifer Lopez 50.

Ben and J-Lo starred in the 2003 movie Gigli together, which was panned, and were engaged for a while after he presented her with a pink diamond engagement ring. Before that he dated Gwyneth Paltrow. 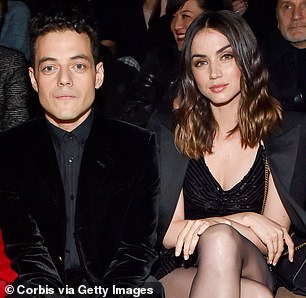 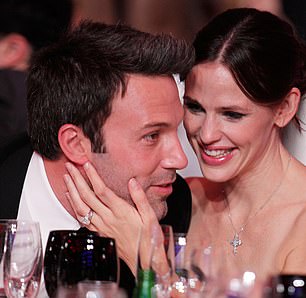 Friends and exes: Ana, left, with pal Rami Malek, who is also her co-star in the Bond movie. And on the right Ben is seen with Garner when they were still wed