Countdown legend Carol Vorderman, 59, gushed over her BBC Radio Wales co-star Owain Wyn Evans, 36, before taking aim at him on Twitter. It comes after the weatherman posted a video of himself playing the drums alongside the BBC News theme moments after finishing a weather report yesterday.

Owain went to extra lengths to entertain viewers at home during lockdown as he shared the footage of himself playing the drums on social media.

Taking to Twitter, Carol retweeted the video and wrote: “I love this man @OwainWynEvans…no other weather presenter like him….he’s FABLAS….”

“Watch us this Sunday on @S4C being naughty while he’s teaching me Welsh..”(sic)

BBC Scotland weather presenter Judith Ralston replied: “I’m with you @carolvorders. He’s one of life’s good people and as my kids say a total LEGEND.”(sic) 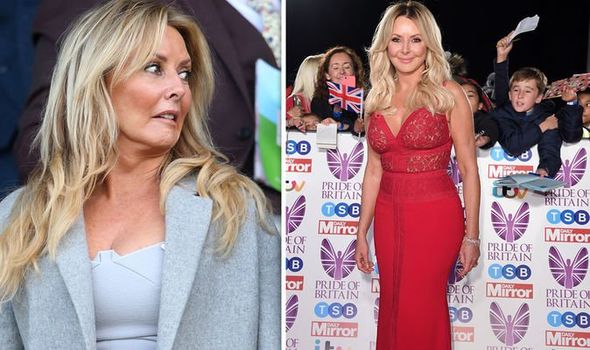 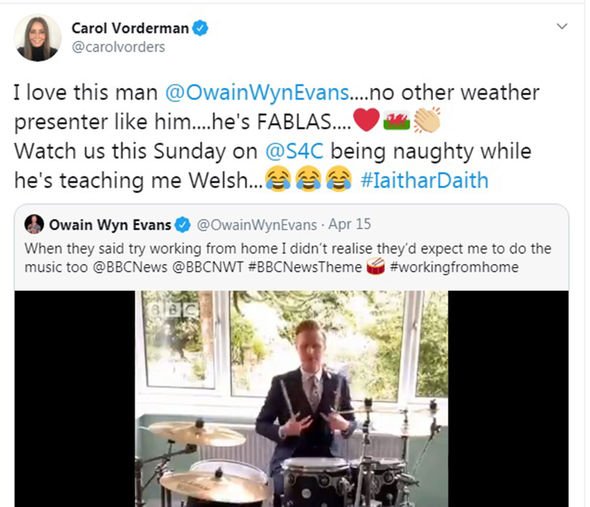 Owain said: “Jude you are an absolute darling, I love you!”

Despite the love everyone showed, it didn’t take long for chaos to ensue after BBC host Simon McCoy questioned Owain.

He joked: “I thought I was your darling #twotimer.”

In a bid to rectify his comments, Owain replied: “Fear not – Judith is my darling, you Simon are my daHling and Vorders is my daHHHling #floozy.” 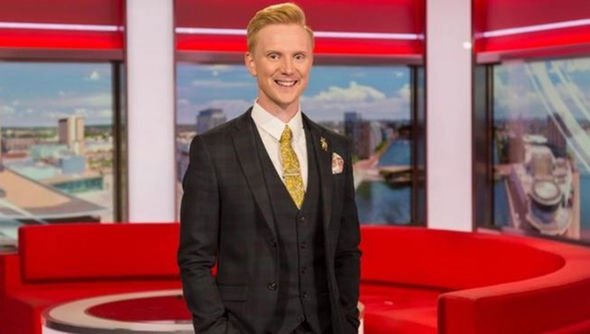 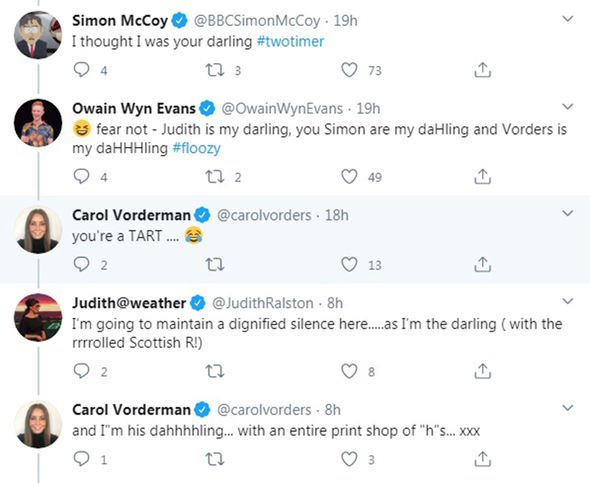 As Carol cheekily chimed: “You’re a tart,” followed by a laughing face emoji.

Judith admitted she wasn’t going to get involved, as she added: “I’m going to maintain a dignified silence here…..as I’m the darling (with the rrrrolled Scottish R!)”(sic)

The cheeky joke comes after Owain caused a social media frenzy with his drumming skills.

He was praised online for his performance, with his BBC colleague Simon McCoy saying: “On #BBCNews at 1450 today – maybe – just maybe – we’ll be featuring a bit of live drumming… #saynomore.”

Elsewhere, Carol and Owain will be featured in a new television series on S4C which follows five celebrities who have decided to learn Welsh.

One celebrity and their Welsh-speaking mentor, who is also a familiar face, travel to different parts of Wales in order to learn more of the language – and there will be several challenges on the way.

In the series, Carol will go on tour with weather presenter Owain and the two visit the area of north Wales where she grew up.

Speaking to Wales Online, the Countdown legend revealed her plans to move back to Wales for the summer as she talked about the new series.

“I’ve got a little house in Pembrokeshire on the cliffs and I’m moving to Cardiff in the late summer,” Carol explained.

“I genuinely feel I have a responsibility to come home and do what I can to show my Welshness now. Speaking our language is part of that.”

BBC Radio Wales airs on Saturdays at 9:30am.