Eckhart Tolle sounds as if he might be a Danish footballer or perhaps a bronze-bearded soldier in Sky’s fantasy epic House Of The Dragon, but in fact he is Oprah Winfrey’s favourite spiritual guru.

One of his sayings was quoted at the start of The Suspect (ITV), a five-part psychological drama starring Aidan ‘Poldark’ Turner: ‘All problems are illusions of the mind.’

Oprah may believe that, but she probably hasn’t had a chance to watch The Suspect. Its big problem is not an illusion — it’s the script, which is a delirious bucket of tripe. 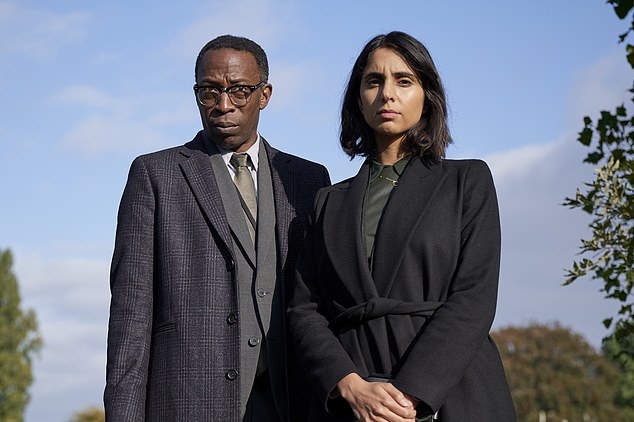 What possessed Aidan to take the starring role, as a psychotherapist suspected of murdering the ex-patient who accused him of sexual assault, is anyone’s guess.

Perhaps he couldn’t resist the chance to show off his thick black beard, the bushiest face-fuzz since Brian Blessed in Flash Gordon.

The Suspect opened with a wildly improbable action sequence that got sillier by the minute. Dr Bigbeard was summoned from a hospital therapy session by a panicking nurse and sent out onto a window ledge to dissuade a 17-year-old patient from jumping.

As police watched helplessly, consultant Dr Owens (Adam James) — but let’s call the smooth-talking medic McSmarm — rushed in and blurted a secret: his best friend Bigbeard should never be allowed on narrow ledges outside hospitals because . . . he has Parkinson’s disease!

Too late. Dr BB went wobbly at the wrong moment and fell off the building, taking the teenager with him. Luckily, after plummeting 100ft, they were saved by a safety harness. The police broke into a round of applause.

The physics seemed a little improbable but we didn’t have time to worry about that, because our hero had to nip home to fix the heating. He’s no plumber, and a burst pipe soaked him and his wife (Camilla Beeput) to the skin.

‘Go upstairs and take your clothes off,’ he ordered her. They kissed, she dashed away giggling and the camera cut to — a woman’s rotting head, sticking out of a grave.

The lurch from playful flirtation to graphic corpse was not just jarring, it was thoroughly tasteless.

So was the consultant’s method of assessing the progress of his patient’s Parkinson’s disease. This involved arm-wrestling. McSmarm was his love rival at university, so I’m guessing he’s the killer, bumping off young women in a belated act of jealous petulance.

For reasons too ridiculous to explain, Beardie was invited to inspect the corpse at the mortuary, before sneaking in for a second look. ‘I’m so sorry,’ he whispered to the body. He owes us all an apology, but that’s a start.

No apologies necessary from Jeremy Paxman, TV’s rudest quizmaster. University Challenge At 60 (BBC2) made it clear that contestants love being insulted when they get questions wrong. 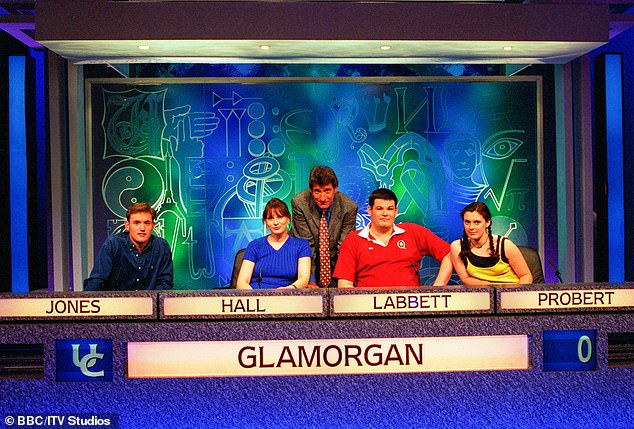 ‘No apologies necessary from Jeremy Paxman, TV’s rudest quizmaster’, says Christopher Stevens, ‘University Challenge At 60 (BBC2) made it clear that contestants love being insulted when they get questions wrong’

For many fans, it brings back memories of schooldays humiliation. ‘Jeremy would have made a very good geography teacher,’ mused Griff Rhys Jones.

New Yorker Brandon Blackwell, a computer science student from Imperial College London, was so set on winning, he spent 18 months studying every name and date in British history.

It’s a pity his DIY course isn’t taught in schools. But some aspects of his preparation are too extreme even as punishments for delinquent pupils: he used to go to sleep listening to recordings of Paxo’s voice.

The other voice of the series belongs to Roger Tilling, who announces the name and college of each student who buzzes in.

In this affectionate tribute, Roger revealed that he and ‘the Paxmaster General’ are not allowed to sit within range of each other, or else they have rubber-band fights. Boys, boys!