CHRISTOPHER STEVENS reviews the weekend’s TV: The most sexist sleuth of the 1970s is back and showing his softer side

The original Dutch detective Piet Van Der Valk made Jack Regan of The Sweeney look like a feminist vegan.

DCI Gene Hunt from Life On Mars is a sandal-wearing stay-at-home husband by comparison.

Even by the standards of 1973, the Amsterdam sleuth with the angelic blond curls was a shocker of a chauvinist pig. His idea of unwinding after work was to roll home drunk, demand dinner from his adoring wife Arlette and then stub out his cigar on the plate.

ITV bosses threatened to axe the show if the Commissaris, played by Barry Foster, didn’t mend his boozy, bullying ways . . . but he remained unrepentant for the next 20 years, on and off. 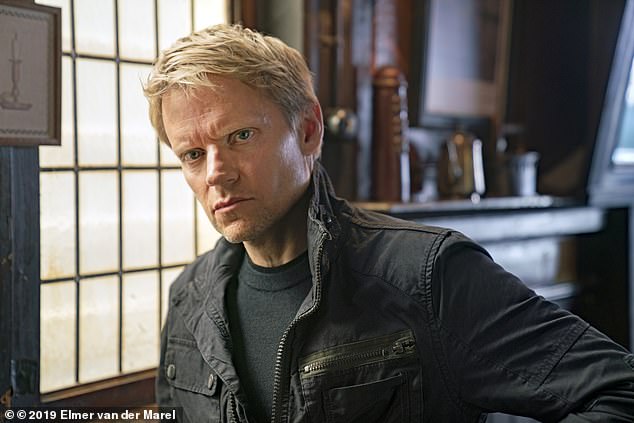 Marc Warren seems to face an impossible task: how to make us love Van Der Valk, without losing his misanthropic essence

Of all the crime serials to reinvent for the 21st century, Van Der Valk (ITV) must be the most unlikely. Gin-swilling, herring-munching, foul-tempered, self-pitying, the character was so unlikeable that even his creator — writer Nicholas Freeling — lost patience and shot him dead halfway through a novel.

Actor Marc Warren seems to face an impossible task: how to make us love Van Der Valk, without losing his misanthropic essence.

In the first two-hour episode of the reinvented show, he achieved it in style. The new, acid blond Commissaris has lost none of his sour cynicism, but he has become vulnerable. Behind his hard eyes we can see hurt.

He’s no longer married and lives by himself on one of Amsterdam’s emblematic canal boats, and he can’t hide his loneliness. He loves dogs. Though he’s itching to brawl with criminals, he treats law-abiding drunks and tramps with respect, even kindness.

One of the attractions of the original was its setting. British viewers became enthralled by the idea that, on the Continent, organised crime was taking over cities through drugs and the sex trade.

This version of Van Der Valk gives modern Amsterdam a thrilling shimmer, with exaggerated colours and every shot composed like a painting — as in Endeavour.

Echoes remain of the Seventies version, just as we can hear the famous theme from the original picked out faintly over the new title sequence. Eye Level, to give the tune its proper name, was so catchy that the Simon Park Orchestra released it as a single . . . and spent four weeks at No 1.

Dreary drag of the weekend:

What a bore Killing Eve (BBC1) has become. There hasn’t been a single memorable line, and we spent half an hour at a funeral. Meanwhile, Villanelle is wearing floral tents. How can something so wonderful end up this bad?

If you want to see how much Van Der Valk has changed, the marvellous Freeview channel Talking Pictures is repeating the 1973 series on Friday evenings. Set your recorder: Talking Pictures has been hard-hit by the economics of lockdown, so you’ll be doing both yourself and them a favour.

Organised crooks were everywhere in Primates (BBC1), a wide-ranging look at ape and monkey behaviour, narrated by Chris Packham. In Bali, macaques loot jewellery and handbags from tourists and hold their ill-gotten gains to ransom: the humans have to hand over fruit to get their stuff back.

In Bangkok, they have been known to pluck strands of long hair from female tourists — and use it to floss their teeth. The documentary’s emphasis is on new discoveries by naturalists, observing primate hierarchies and the innovative ways they use tools. Filmed over years, with a serious budget, the footage is spectacular.

But the star sequence was just old-fashioned animal antics, as a toddler mountain gorilla duffed up his long-suffering dad.

Lady gorillas love an alpha male with a gentle side, apparently. Scientists now think silverbacks who play with their children will have five times as many offspring.

Real men aren’t afraid to show their softer feelings. Even Commissaris Van der Valk has discovered the truth of that.