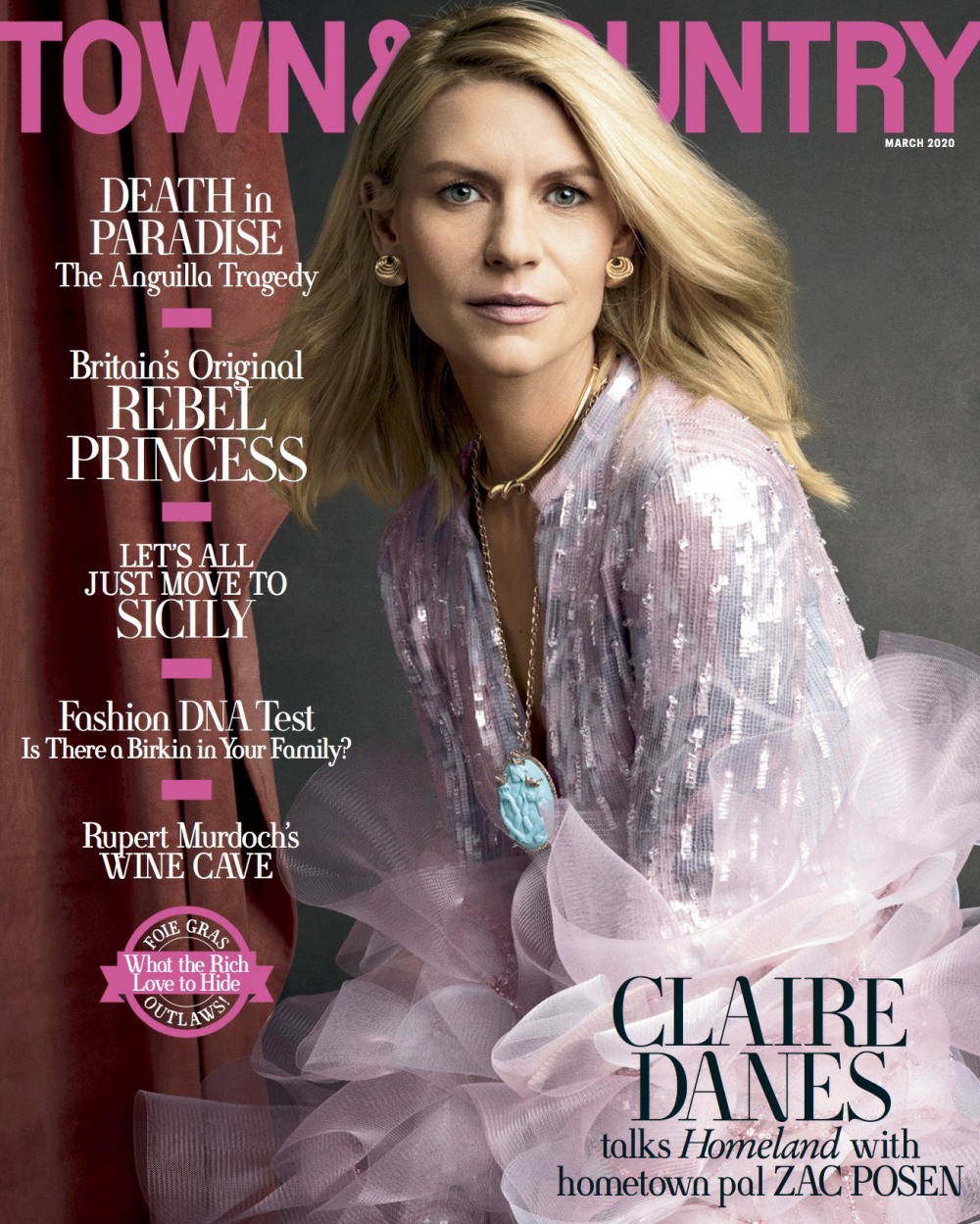 Claire Danes covers the March issue of Town & Country to promote the eighth and final season of Homeland. I’ll be real: I thought Homeland was over a few years ago? I stopped watching it when you-know-who was killed off (no spoilers, even though it was years ago). For some reason, I thought the show only continued for a year or two more. Guess I was wrong! Anyway, this T&C piece is actually quite good – the interview was conducted by Claire’s dear friend Zac Posen, whom she’s known for about twenty years. They knew each other before social media, before celebrities had “brands” and before every single thing went to hell. So the interview has a lot of ‘90s and early ‘00s nostalgia, which I don’t mind at all. Some highlights:

Her childhood in Soho: “In Soho during the ’70s and ’80s you had to prove that you were an artist to live there. So it was like a little commune; it was a real gathering of a certain kind of mind. I remember the factories were actively closing when we lived on Crosby Street. There was a factory that’s now MoMA’s store, and they were hemorrhaging all their gear. My mom took these chairs on wheels—they’re still her dining chairs—but I was embarrassed because I thought we were stealing them. I still love [Soho]. It’s really quiet in the morning, before the stores open, and it feels reminiscent of what it was like. But that’s how New York works, so I don’t begrudge it. It’s not ever yours, it’s everybody’s. That’s why it’s great.

Filming Homeland in Morocco: “We were in Casablanca. We also filmed in Morocco about three seasons back, when [my son] Cyrus was around [my younger son] Rowan’s age now. Both boys learned to crawl in Morocco, which is weird, because they’re five and a half years apart. I was there for about six months. Cyrus went to school there, and he really will remember it. He’s been dragged all over the planet, and those memories are in there somewhere, but I think he will actually be able to recall this.

Cyrus loves being on set: “He likes the attention that he gets on set, the snacks from craft services…. When he was around four and he would get mad at me, he would bark and say, “Back to one, Mommy”—“Back to one” meaning back to your first positions. So if I was waking him up for school and he didn’t want to: “Back to one, Mommy.”

How people her age romanticize the pre-social media age: “How could we not? That’s what people do. But I recently dropped out of social media. I felt this incredible pressure to participate, and it was fun until it stopped being fun. It was starting to encroach a little bit too much onto my intimate mental space. You know what I mean? I would think, “Oh, is that Instagrammable or not?” I was starting to see everything through that filter, and I didn’t like it. It just got to be too loud.

Fashion & Hollywood: “Fashion and Hollywood started to merge in a serious way when I came of age. Armani started it; he partnered with certain actors. I won’t name all the people… And there were no stylists. You did your own styling. You got a dress, and you did your own hair and makeup. There also wasn’t this proliferation of award ceremonies. It wasn’t an industry, and now it is. I remember, for Romeo + Juliet, Baz Luhrmann—who is a visionary and very interested in aesthetics—partnered with Prada, so Miuccia Prada did all my clothes for that press tour. That was amazing… It feels antiquated now. But we’re evolving, and that’s always a good thing.”

If you read the whole interview, it’s clear that Zac Posen truly misses that pre-social media time and would really love to find a way to go back. Claire is more forward-looking and pragmatic about it, like “it is what it is.” I loved the part about her sons both learning how to crawl in Morocco and Cyrus going to school there. Cyrus sounds like a pistol – “Back to one, Mommy.” He grew up around that non-stop. Also: Claire was on red carpets in the 1990s, when stars went to big award shows, they didn’t do their own hair and makeup! It wasn’t that lowkey!! Now, for premieres, maybe. But not for, like, the Oscars! 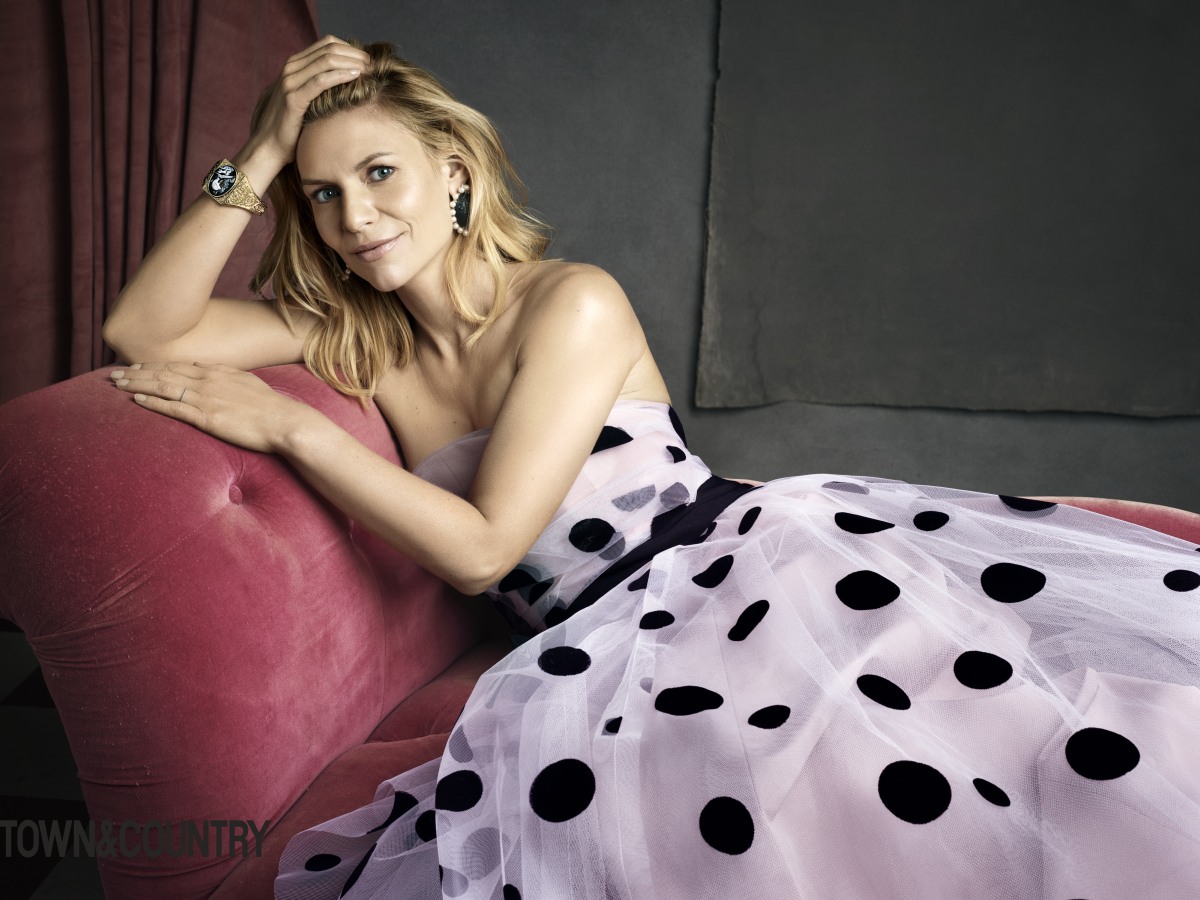 Related posts:
March 6, 2020 Celebrities Comments Off on Claire Danes recently ‘dropped out of social media’: ‘It just got to be too loud’
Celebrity News:
Birds of a Feathers Lesley Joseph on Pauline Quirke not being on TV
Elon Musk got booed on stage at Dave Chappelles show in San Francisco
Gayle King Defends Prince Harry & Meghan Markle’s Netflix Docuseries!
Taylor Swift vs Olivia Rodrigo! | Perez Hilton
Scott Disick 'Regrets' How He 'Handled' Ill-Fated Relationship With Kourtney Kardashian As He Tries To Move Forward
Recent Posts