Dan Osborne has spoken out about why he and Jacqueline Jossa made an eight-hour round trip to visit their future puppy amid the third national lockdown.

The couple had shared, and later deleted, a picture of them cuddling a sweet rottweiler puppy as they told fans: ‘Look who we did an 8 hour round trip to go visit today.’

They came under fire from fans as it appeared they had broken lockdown rules, which mean everyone has to stay in their local area, only leaving their homes for essential reasons such as to buy food or to go to work if they are unable to work from home.

Dan, 29, took to his Instagram story following the backlash, explaining that he has been travelling the country for work, delivering competition prizes, and that Jacqueline, 28, and their two children remained in the car, only meeting the puppy outside.

He told fans: ‘Yesterday I had a bit of work to do and a prize to deliver and also see a unit – we’re looking at units up and down the country because our prizes are delivered everywhere.

‘We thought on our way back we’d stop and see our puppy, so my family have come to work with me. 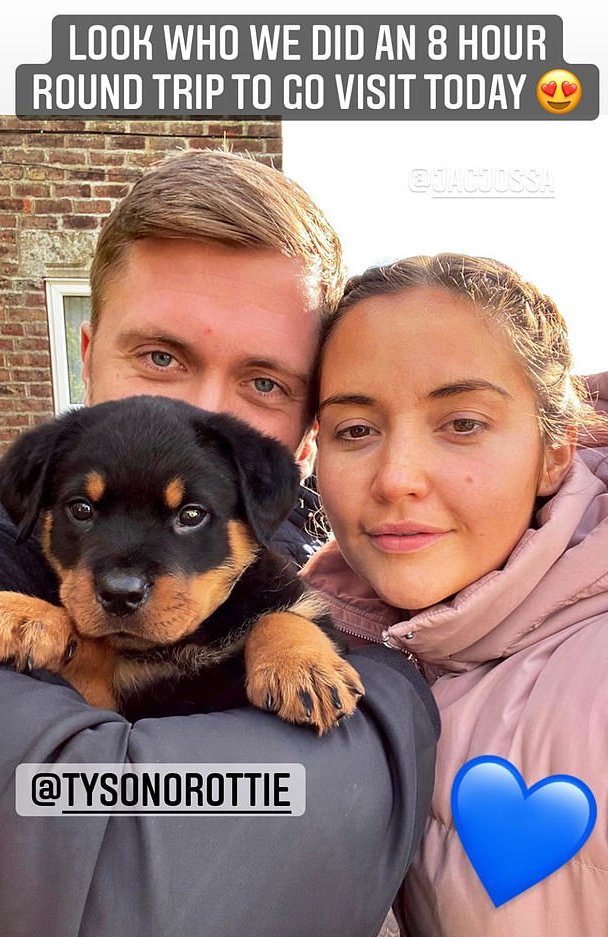 ‘[We were] sitting in my own car with the same people that I live with and spend every day with, so there is absolutely no problem, not causing any harm to anyone else.’

Dan says he wanted their two daughters, Ella, six, and Mia, two, to meet the puppy to see how they would cope with owning such a big dog when it grows up.

He added: ‘Now if I did just go and buy a big dog and didn’t meet it and had it in the house with the kids without meeting it I would then get stick and people saying “why are you buying a rottweiler without letting it see your kids first?”. So I can’t win in this situation.

‘We didn’t come in contact with any other human being, went outside, looked at a puppy and then drove home. We were in a car, we are not causing any problem to anyone else.

‘There is no problem with what I did… I don’t know why Total K9 have had the police down there, it’s ridiculous.’

Dan added that people who had been trolling the family online and sending them abuse can ‘go f**k yourselves. You don’t know me, I don’t know you, you woudn’t call me it to my face so don’t do it over social media.’