Production on the UK’s biggest soaps has been thrown into crisis due to the coronavirus pandemic, which has placed the UK in a lockdown that could last up to a year, according to the government.

BBC’s EastEnders announced Wednesday that filming has been suspended amid the coronavirus pandemic and it will cut it’s weekly number of episodes to just two a week, in a bid to ‘ration’ their filmed content.

ITV’s Coronation Street and Emmerdale meanwhile are continuing to film scenes but will also reportedly cut the number of episodes aired and stop filming for members of the casts over the age of 70 as well as banning kissing scenes.

Cut short: EastEnders has announced that filming has been suspended amid the coronavirus pandemic,with the UK’s soaps thrown into crisis

Which UK shows have stopped filming?

In a statement shared Wednesday the BBC said: ‘In light of the spread of Covid-19, after much consideration, it has been decided that filming on EastEnders will be postponed until further notice.

‘The decision was made after the latest Government update. We will continue to follow the latest news and advice from the World Health Organisation and Public Health England.

‘We have also taken the decision to reduce the amount of episodes we broadcast each week to two, so that we can ensure the audience can continue to enjoy EastEnders in their homes for as long as possible.’

In reference to their scripted programmes Casualty, Doctors, EastEnders, Holby City, Pobol y Cwm and River City, the corporation said: ‘In light of the spread of Covid-19, after much consideration, it has been decided that filming on all BBC Studios continuing dramas will be postponed until further notice.

‘The decision was made after the latest Government update. We will continue to follow the latest news and advice from the World Health Organisation and public health organisations.’

In a separate statement, the BBC announced a ‘series of changes to our output’ to ‘help keep the nation informed, educated and entertained’.

It said: ‘We will do everything we can to maintain Breakfast, the One, Six and Ten (O’Clock News) and ensure they continue to perform a vital role on BBC One.’

Desolate: The BBC Studios in Elstree has been completely deserted as may of its shows suspended filming until further notice

BBC Director-General Lord Hall said: ‘We also will do everything from using our airwaves for exercise classes for older people, religious services, recipes and advice on food for older people and low-income families, and should schools close, education programming for different age groups.

‘We will also be launching a whole new iPlayer experience for children. And of course there will be entertainment – with the ambition of giving people some escapism and hopefully the odd smile.’

MailOnline has contacted representatives for EastEnders for further comment. 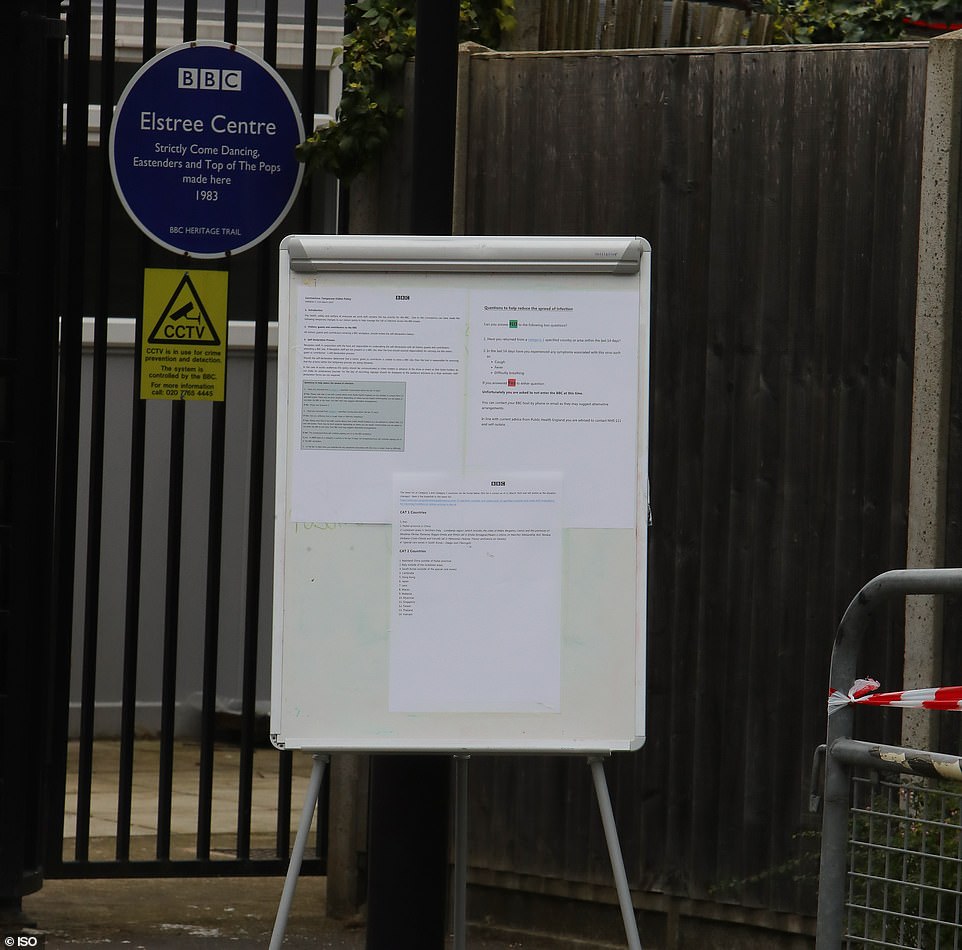 Warning: A sign outside the studios warned staff members to stay at home if they have any symptoms

It is thought that EastEnders’ films up to eight weeks in advance, meaning they would have around 32 episodes worth of content already filmed.

Under the new broadcast measures, this would mean that EastEnders would be able to spread out their filmed episodes for up to 16 weeks.

Following this news, it was revealed that the BBC Studios in Elstree have been completely closed.

A sign outside the deserted studio warns staff members to stay away if they suffer from any symptoms.

Worrying: EastEnders is thought to film around eight weeks in advance, meaning that with the new broadcast measures they have enough episodes to last for 16 weeks

Locked down: The studio was deserted as filming on various shows was suspended, including Holby City, Casualty and Scottish soap River City

Dviding it out: The news comes as it was also reported that Coronation Street and Emmerdale could also reduce their number of weekly episodes

ITV soaps Coronation Street and Emmerdale could also reduce their number of weekly episodes in a bid to ration shows they’ve already filmed.

A source told The Mirror that ITV bosses have held crisis talks as many elderly cast members have shared their concerns about coming into work.

An insider on the soap has said: ‘We can’t force people to carry on coming to the set when the nation is being told to work from home if it’s possible. Some people have a lot of anxiety.

‘It’s very difficult to know how to proceed when the situation and advice is changing all the time. 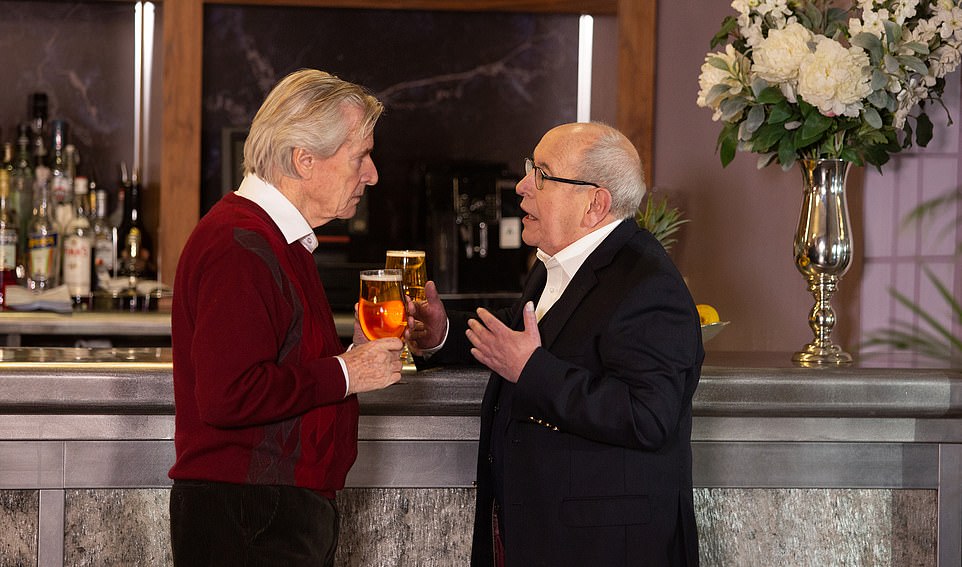 ‘We very much want to do everything we can to keep the show on the road, but we also have to respect people’s choices about their own health.’

It has also been reported that Coronation Street have banned kissing scenes between cast members to desperately try and prevent the spread of the virus.

According to reports, any scenes that involve kissing are now being rewritten to make sure there is ‘limited physical contact.’ 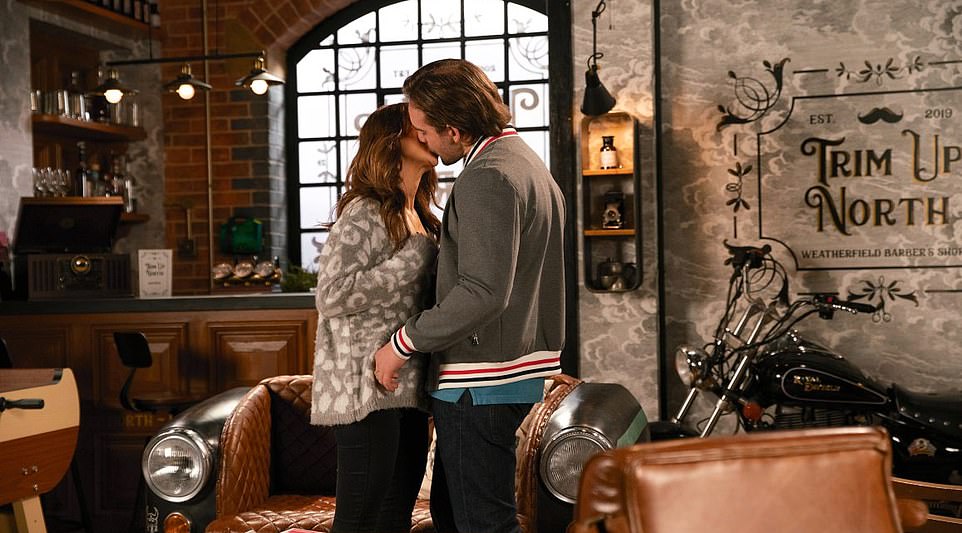 Kissing ban: According to reports, any scenes that involve kissing are now being rewritten to make sure there is ‘limited physical contact’ (Maria Connor and Ali Neeson kissing on the soap in February)

A source told The Sun: ‘All of the soaps are desperate to keep running. If they disappear out of the schedules there’s huge gaps which is a major headache.

‘Coronation Street shoots about six to eight weeks in advance, so viewers might see some kissing in the next month or so, but the scenes they’re shooting right now will have nothing of the sort in. They are taking no chances.’

An unnamed Coronation Street cast member who went into self-isolation 10 days ago after returning from an affected country did not develop symptoms and has now returned to work.

It’s been reported that soap writers are trying to plan episodes that won’t feature the older cast members, as they join a slew of shows being forced to suspend production. 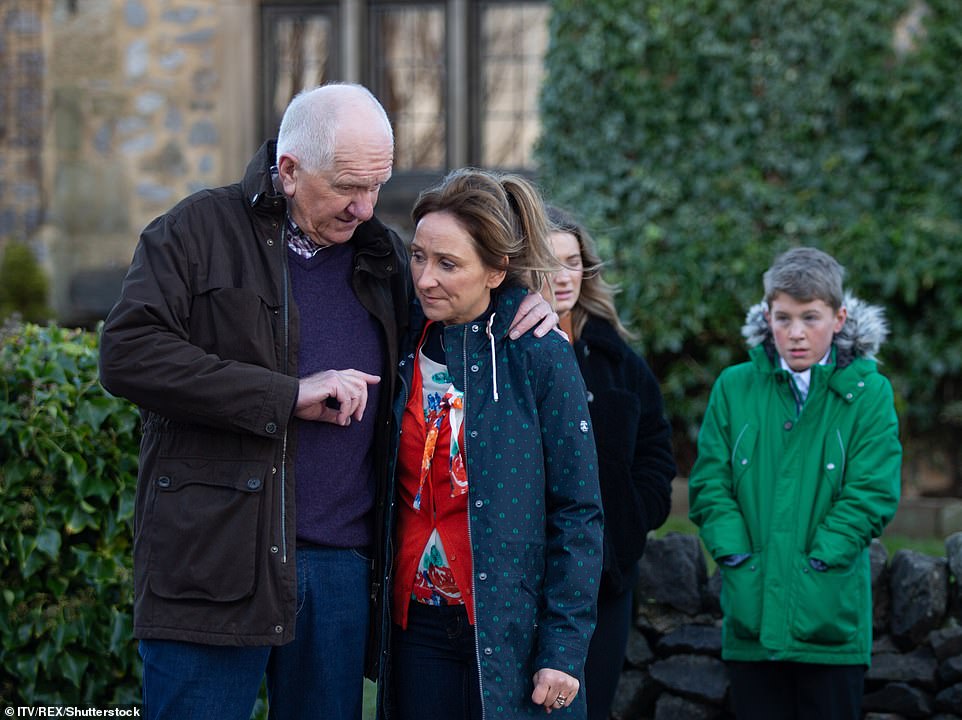 Over 70: Cast members on ITV soaps such as Emmerdale’s Duncan Preston (pictured) are reportedly stopping film in line with government advice for over 70s to self isolate

ITV Studios creative director John Whiston previously confirmed that they would use Coronation Street and Emmerdale to remind viewers to wash their hands.

He said: ‘Because we script and shoot so far in advance we don’t generally reflect contemporary issues.

‘However we are going to use the soaps to remind people of important public health issues such as the need to wash their hands. We’ll try and do more such messages going forward.’

An ITV spokesperson said on Tuesday: ‘Our priority is the wellbeing and safety of all our colleagues and everyone who works with us on our shows and across our production.

‘Clearly, along with everyone across the country, we are in a developing and dynamic situation with respect to the coronavirus, so we’re taking the appropriate steps.’

‘We’ve looked at our procedures and our established contingency plans and we’re confident that we’re able to continue with our filming schedule.

‘In terms of our colleagues, our aim is to do everything we can to support anyone affected. We’re keeping a close eye on the situation and putting our people first.’