Jill Biden says she and President Joe Biden are “bringing love” to the United Kingdom during their first international trip this week. She wore her “LOVE” jacket Thursday to drive home her message.

The presidential couple, in the U.K. for a Group of Seven summit in Cornwall in southwestern England, joined British Prime Minister Boris Johnson and his new wife Carrie Johnson and posed at a scenic vista overlooking the shore of Carbis Bay.

When the group turned away, the back of the first lady’s dark blazer came into view: “LOVE” was spelled out in block letters emblazoned in silver studs. It’s a jacket she’s worn before, most recently on the campaign trail in 2020.

During an exchange with pool reporters, Biden explained the meaning behind her jacket.

“I think that we’re bringing love from America,” she told them according to a White House transcript. “This is a global conference and we are trying to bring unity across the globe and I think it’s needed right now, that people feel a sense of unity from all the countries and feel a sense of hope after this year of the pandemic.”

First lady Jill Biden turns around to show the word "LOVE" on the back of her jacket as she speaks with reporters after visiting with Carrie Johnson, wife of British Prime Minister Boris Johnson, ahead of the G7 summit, June 10, 2021, in Carbis Bay, England. (Photo: Patrick Semansky, AP)

Some on Twitter pointed out the contrast to former first lady Melania Trump’s jacket she wore on a trip to the U.S.-Mexico border in June 2018 that read on the back “I Really Don’t Care Do U?”

Biden was bubbly in her remarks to reporters. “It’s really nice to be here in Cornwall. It’s my first time. Obviously it’s beautiful for those of you have been here before. Joe and I are really looking forward to meeting everyone at the G7,” she said according to the pool report. 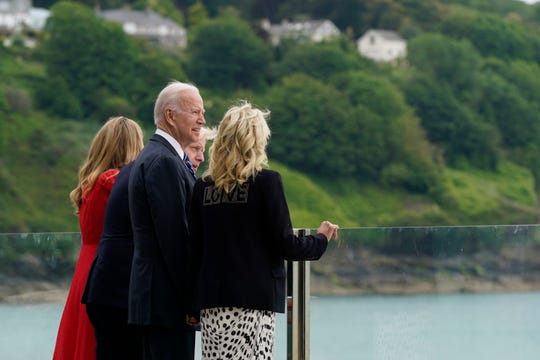 Like Donald and Melania Trump in July 2018, the Bidens will take tea with Queen Elizabeth II at Windsor Castle on Sunday during a courtesy call that will feature the usual impressive ceremonial flourishes associated with British royals.

Biden told reporters she and the president are excited about meeting the 95-year-old monarch. Biden will be the 13th serving president she’s met out of 14 since 1951, the year before she became queen. 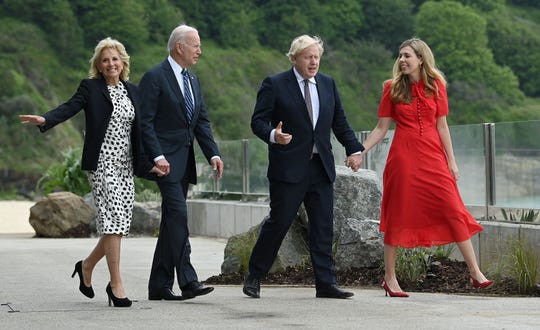 “Well, we’re hoping to focus, I think, on education,” Biden said. “Joe and I are both looking forward to meeting the queen. That’s an exciting part of the visit for us. We’ve looked forward to this for weeks and now it’s finally here. It’s a beautiful beginning.”

After the visit with the queen on Sunday, the first lady is scheduled to meet with British veterans who participated in Walk of America, a 2018 expedition led by Walking with the Wounded, for which the first lady served as patron.

She will then head home while the president goes on to Brussels for a NATO summit, where he is scheduled to meet with Russian President Vladimir Putin on June 16.