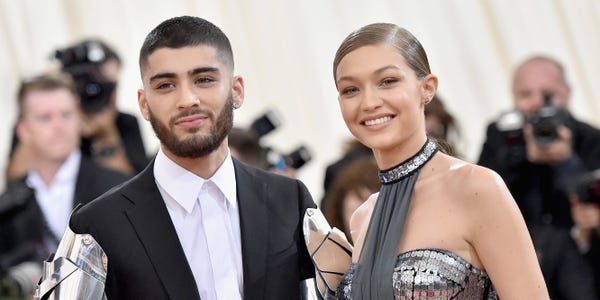 Gigi Hadid may have given birth to her daughter on a farm in rural Pennsylvania, Page Six reported on Saturday.

The supermodel shared the news on Wednesday via Instagram that she and former One Direction band member Zayn Malik — who she's been dating for several years — welcomed a baby girl.

The black-and-white photo shows Malik's hand over the newborn.

Our girl joined us earth-side this weekend and she’s already changed our world. So in love??

"Our girl joined us earth-side this weekend and she's already changed our world. So in love," she wrote in the caption.

Hadid did not specify in the Instagram post where she gave birth, nor did she give an exact day, writing that she welcomed her baby "over the weekend."

Unnamed sources who claim to be close to the couple told Page Six that Hadid gave birth on a farm in Pennsylvania on September 19.

The couple has been at their farm since May, and they've been splitting their time between Pennsylvania and New York City, according to Page Six's sources.

The supermodel's mother, Yolanda Hadid, has a residence in New Hope, Pennsylvania, a town about an hour drive from Philadelphia — and in 2018, Malik and Hadid purchased a home and farm near Yolanda's, according to a profile of Malik written by Carrie Battan and published in GQ.

Malik also told GQ in 2018 that at one point, the couple kept a horse named Cool on the farm and also grew fruits and vegetables there.

Sources also told Page Six that Hadid and Malik are keeping details of their daughter's birth private until they are ready to share them.

Hadid previously said that she was keeping the news of her pregnancy private to focus on the coronavirus pandemic and Black Lives Matter protests during an Instagram live-streamed video in July, Insider's Claudia Willen reported.

Representatives for Hadid and Malik, respectively, did not immediately respond to Insider's request for comment about the birth location or date of the couple's child.

However, Hadid has shared one detail so far about being a new mom. She said on Instagram that her daughter has already received presents from her "aunties" Taylor Swift and Donatella Versace, Insider's Olivia Singh reported.

On Friday, the model posted a photo on her Instagram story of her newborn nestled with a pink blanket handmade by Swift and wearing white clothing with a Versace logo.

Related posts:
September 27, 2020 Celebrities Comments Off on Gigi Hadid may have given birth on a farm in Pennsylvania, according to a report
Celebrity News:
NXIVM Sex Cult Leader Keith Raniere Claims He Got Attacked In Prison – And Makes Bold Claims Against Authorities!
Aston Merrygold Shows Off Wedding Band After Marrying Fiancee Sarah
Queen and Prince Philip reunited at last as she’s buried in chapel beside him
President Biden met with the families of Brittney Griner and Paul Whelan
Entry to See Queen Elizabeth Lying in State Permanently Closed
Recent Posts