The bomb that gave birth to Godzilla: The mutant dinosaur is back for an epic big-screen showdown with King Kong. But few realise his creation was inspired by fishermen who witnessed a real apocalyptic disaster

As a searing flash of yellow light blazed through the portholes of the rickety Japanese fishing trawler on which he was trying to grab a few well-earned hours of sleep, young fisherman Oishi Matashichi leapt from his bunk to join his petrified colleagues on deck.

Just 20 years old, he had gone to sea to provide for his mother and five siblings after his father, a factory hand, was crushed to death in an accident at work.

Now, it seemed he might be about to meet his own untimely end aboard the Lucky Dragon — a boat whose name belied the fate of its crew members.

At 6.45am it should still have been dark, but the sky above that stretch of the Pacific Ocean between Hawaii and the Philippines was suddenly painted in flaming colours so intense that Oishi would later describe it as ‘the day the sun rose in the west’. This month sees the release of the 36th film featuring Godzilla — Godzilla vs Kong — in which he is pitched against America’s own home-grown horror icon, King Kong (pictured)

They stood transfixed as a bright spot on the horizon formed the shape of a huge umbrella, glowing for three or four minutes and turning orange, red and purple before going dark again.

Little did they know it at the time, on that fateful morning of March 1, 1954, but those fisherman were witnessing the detonation of America’s largest ever nuclear device — a hydrogen bomb 1,000 more times powerful than the ‘Little Boy’ atomic bomb released over Hiroshima and 700 times more destructive than the ‘Fat Man’ used on Nagasaki.

In a Japan still traumatised by those attacks, their story would lead to a national outcry and fuel fears that found the most unexpected of outlets: the creation of one of the most enduring and terrifying creatures in movie history.

Since his cinematic debut nearly 70 years ago, the giant radiation-breathing dinosaur known as Godzilla has featured in 35 films and this month sees the release of the 36th — Godzilla vs Kong — in which he is pitched against America’s own home-grown horror icon, King Kong.

With UK cinemas closed during lockdown, and Warner Bros streaming the film exclusively in America, it is said to have the fourth most-viewed online trailer of all time.

Full of the usual impressive special effects and thumping music scores, it shows the two adversaries slugging it out like extremely heavyweight boxers.

But for true drama it’s hard to beat the real‑life tragedy that inspired Japanese filmmaker Ishiro Honda when he directed the original Godzilla film in 1954. 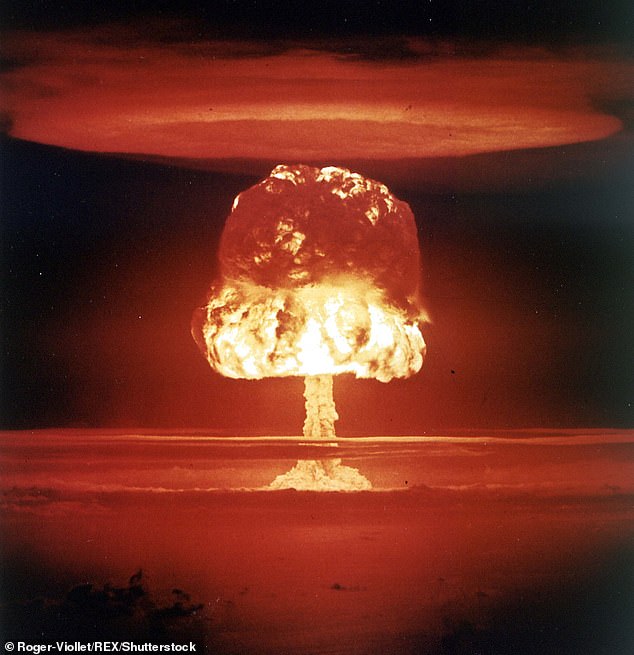 In 1954 fisherman witnessed the detonation of America’s largest ever nuclear device — a hydrogen bomb 1,000 more times powerful than the ‘Little Boy’ atomic bomb released over Hiroshima and 700 times more destructive than the ‘Fat Man’ used on Nagasaki

Conscripted into the Imperial Japanese Army, he had passed through the ruins of Hiroshima at the end of World War II.

The sight would forever haunt him but, during their postwar occupation of Japan, the Americans censored all newspaper coverage of the true damage caused by the atomic bombs — emphasising that it was the blasts that had killed people and downplaying the radiation-related illnesses and birth defects seen in the years that followed.

Even after the occupation ended in 1952, it was still difficult for Japanese activists to get the truth about the aftermath reported. Their efforts might have been in vain, had it not been for the Cold War.

In August 1953, the Soviets successfully exploded the first hydrogen bomb suitable for use in combat. Lighter and far more deadly than the atomic bombs used over Japan, it left the Americans playing catch-up in the nuclear arms race.

Plans to test their prototype in Bikini Atoll, a Pacific paradise chosen for its remote location, went ahead just as the crew of the Lucky Dragon were embarking on their next fishing trip, a two-month voyage departing from the tiny Japanese port of Yaizu in January 1954.

‘Things went wrong from the first,’ says Oishi Matashichi. Engine trouble and bad weather were followed by a near-disastrous incident when their nets got tangled in coral.

Faced with the possibility of returning home in disgrace after catching only a fraction of their expected haul, they headed towards the Marshall Islands, of which Bikini Atoll is a part.

With both food and fuel running low, March 1 was to be their last day of fishing. Tragically for them, it was also the day of the hydrogen bomb test at Bikini Atoll.

Although this device was known to be far more powerful than anything seen before, an unforeseen chemical reaction made the explosion two and half times greater than predicted.

While no one on the Lucky Dragon knew the test was taking place, they had, by chance, moored just outside the designated danger zone. They remained unscathed by the initial blast but then they heard a roar which, according to Oishi, ‘engulfed the sea, came up from the ocean floor like an earthquake’.

This was followed by the most dreadful sight. Releasing a force equivalent to 15 million tons of the explosive TNT, the bomb had produced far greater fallout than anticipated, covering an area of 100 square miles, including many inhabited islands.

The fishermen watched in horror as a vast mushroom-shaped cloud rose high into the sky and began raining down on them a hail of radioactive coral and sand. This lay so thickly on the deck that they could make footprints in it.

‘The particles were falling on us, just like sleet,’ says Oishi. ‘They penetrated mercilessly — eyes, nose, ears, mouth. We had no sense that it was dangerous. I took a lick. It was gritty but had no taste.’

Unwilling to abandon their lines and oblivious to the threat, the men laboured for six hours to pull them in. By the time they set off on their fortnight-long journey back to Yaizu, they were already suffering alarming symptoms, including agonising headaches, nausea, dizziness and itchy eyes clogged up by mucus.

By the third day, their faces had turned unusually dark and small blisters had appeared on the parts of their bodies where the ‘death ash’, as they later called it, had settled as they worked.

Within a week their hair was falling out. But their diagnosis with radiation sickness back in Japan came only after part of their catch had been sold at market.

After a frenzied but unsuccessful hunt to track down the contaminated tuna made headlines nationwide, there came news that many other Japanese fishing vessels had also been affected, with more than 20,000 crew members exposed to radiation from the test.

Many people, including the emperor, refused to eat fish and a total of 457 tons of tuna had to be destroyed as the fish market collapsed.

That September, the Lucky Dragon’s 40-year-old radio operator, Aikichi Kuboyama, died from radiation poisoning. ‘Not since the emperor announced the end of the war has an incident so stirred the emotions of the Japanese,’ reported the Associated Press. Soon, some 32 million enraged Japanese citizens had signed a petition opposing nuclear weapons.

But the Americans accepted no responsibility. Atomic Energy Commission chairman Lewis Strauss even claimed that the Lucky Dragon had been a ‘red spy outfit’, intent on conducting espionage for the Soviet Union.

This further fuelled anti-U.S. hostility in Japan. It was against this background that Ishiro Honda began work on his movie. The opening scene featured the disappearance of a Japanese freighter and fishing boat.

Both were said to have been destroyed by a legendary sea-dwelling dinosaur who has lingered in one of the ocean’s deep pockets for millions of years before being disturbed by underwater hydrogen-bomb tests.

After absorbing an enormous amount of radiation — his furrowed skin representing the raised scars seen on the survivors of Hiroshima and Nagasaki — the enraged creature goes on the rampage, incinerating the residents of Tokyo with his radioactive breath, leaving death and devastation in his wake.

Although Godzilla was played by an actor wearing a rubber costume — so hot that the crew regularly scooped cups of sweat out of the suit between takes — the film is hailed for its unflinching realism, with scenes of hospitals overflowing with dying patients, churches full of widows and orphans and hordes of injured refugees.

In his book Godzilla On My Mind, American academic William Tsutsui points out that ‘no less an authority than Steven Spielberg has claimed it was “the most masterful of all the dinosaur movies because it made you believe it was really happening”.’

As the physical embodiment of the atomic bomb, Godzilla was received with great solemnity by Japanese audiences. They were reported to have watched the destruction of Tokyo in respectful silence, some even leaving cinemas in tears. Such reactions encouraged Ishiro to believe that the film might help bring about an end to nuclear testing. But those hopes were dashed when the Americans bought the rights and released a heavily edited version of the film in 1956.

‘Virtually all sections that might have reflected negatively on the United States, highlighted Japanese resentments arising from World War II or explored the nuclear issue in any depth were excised or otherwise neutralised,’ wrote William Tsutsui.

Depicted by Ishiro as being around 50 ft tall, Godzilla in the American version appeared at eight times that height, with trailers declaring: ‘It’s alive! A gigantic beast stalking the earth! Crushing all before it in a psychotic cavalcade of electrifying horror!’

Today, it is one of the most successful franchises in film history, with spin-off merchandise generating hundreds of millions of pounds every year.

But some of the movies have still caused political controversy. In 1992, a Japanese film which pitted Godzilla against the three-headed dragon King Ghidorah suggested that the former had been made irate by American atomic testing during World War II — stepping, in revenge, on soldiers who had dared to invade the island on which it was born.

This resulted in protests by U.S. veteran groups and the film did not get released in America until 1998, the same year that Hollywood hit back with a version directed by Roland Emmerich. His take laid blame for the carnage caused by Godzilla on nuclear tests by France during the 1960s.

There is little prospect that new movie Godzilla vs Kong will come any closer to reflecting the truth of what happened at Bikini Atoll in the 1950s. It’s the most recent in the ‘Monsterverse’ series of four films produced by Legendary Entertainment and co-produced and distributed by Warner Bros.

The first, Godzilla, released in 2014, came up with perhaps the most audacious suggestion of all — that the atomic testing of the 1950s was a cover for attempts to nuke the legendary lizard. Exploiting such terrible moments in history as trite plot devices hardly does service to the victims, including the three crew members of the Lucky Dragon who are still alive, one of them Oishi Matashichi, 87.

In his autobiography The Day The Sun Rose In The West, published in 2011, he revealed that, although he and his wife would eventually go on to have two healthy children, their first was stillborn and deformed.

‘The new life with which my wife and I were blessed — radiation stole even that,’ he wrote.

He went on to run a small laundry business and in his spare time has been a vocal supporter of the anti-nuclear movement, giving many talks to Japanese schoolchildren and students. Following a stroke, he lives quietly in Tokyo with his daughter but last year talked about his experiences for acclaimed American documentary Day Of The Western Sunrise.

‘It’s my responsibility to tell the world about my message,’ he says quietly — a message about real-life monsters that have affected many profoundly, and not any you might see on the big screen.

Godzilla vs Kong will be released in the UK later this year.