Industrial Light & Magic’s new LED technology has revolutionized sci-fi and is about to bring period drama into the 21st Century. But its time and energy-saving benefits will change everything.

Prior to the pandemic, virtual production—the use of digital tools to mimic and replace live-action production paradigms—was still a relatively under-the-radar emerging technology most recognized for its use on Disney’s The Mandalorian. However, the ongoing spate of lockdowns around the globe has thrust its potential firmly into the spotlight: suddenly, the prospect of being able to house ambitious shoots in a dynamic contained space, which can recreate multiple high-quality locations on a daily basis, has shifted from being an intriguing possibility to a reality that could prove crucial for the future of this business. 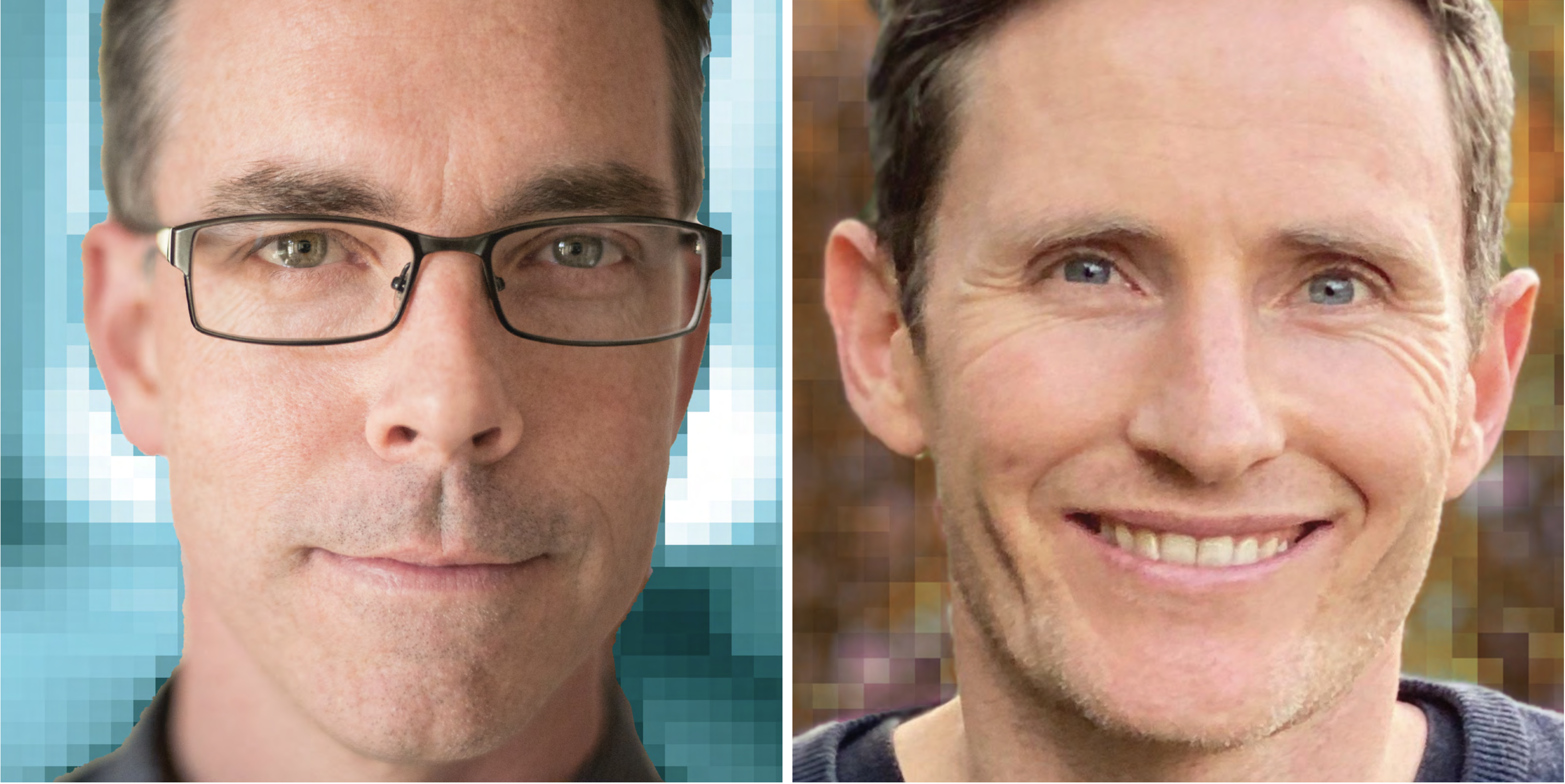 Disney-owned VFX company Industrial Light & Magic (ILM) has established itself at the forefront of the virtual production movement, thanks to its work on the interstellar Disney+ series, but the company has been involved in the tech for more than 20 years. “It dates all the way back to A.I. with Steven Spielberg,” explains Rob Bredow, SVP and Chief Creative Officer at ILM. “Stagecraft is the umbrella term we use to cover all of ILM’s end-to-end virtual production technology. That encompasses everything from virtual scouting and virtual cameras through to LED screens, which is one of the newest applications and is really moving the tech forward right now.”

The Stagecraft team has continuously pushed the boundaries of virtual production, and the tech has already evolved through numerous incarnations. The key recent update, as Bredow notes, has been the introduction of giant LED screens, which display high-quality digital backdrops that encircle a production stage and move as the camera moves, creating a real-time, dynamic landscape. Rendered via gaming software, these photo-real images effectively remove the need for green screen. This ground-breaking tech was first used by ILM primarily for lighting on 2016’s Rogue One: A Star Wars Story, but it found its true use two years later on Solo: A Star Wars Story, when the company built a wraparound screen encircling its Millennium Falcon interior set. “We put the actors in the cockpit, and they could watch the entire Kessel Run play out in front of them for 20 minutes straight,” recalls Bredow. “Ron Howard could call cues on the fly, and it made the performances different. It was eye-opening how much it changed the filmmaking process and improved quality. That really inspired us to see the opportunity there.” 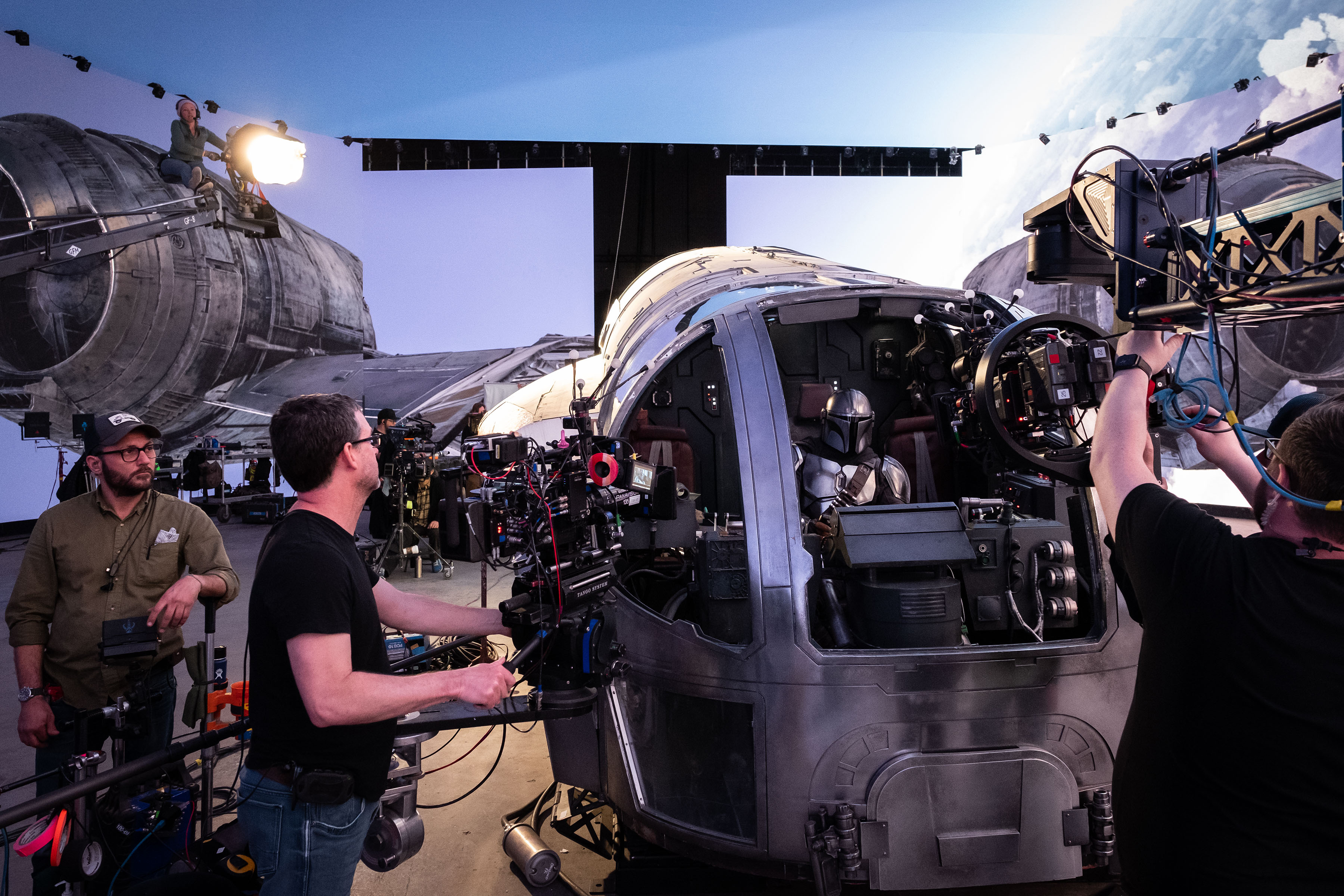 As well as helping actors, who no longer need to imagine the backdrops they are performing in front of, virtual production can also benefit the entire filmmaking ecosystem. A lot of work is shifted into the pre-production process, meaning everyone is more prepared once on set. “It ends up being incredibly creatively satisfying,” says Bredow, “because you get to see everything on the day: your production designer gets to design not just the foreground but also the background; your director of photography gets to light the digital aspects of the set and integrate them into the practical aspects, and the VFX team get to integrate themselves with those other departments. It’s a game-changer for those departments, though it affects everyone.”

The tech also drastically reduces the post-production process, as the majority of VFX is rendered in-camera while shooting. This allows key creatives—directors, producer, showrunners— to see everything come together in real-time on a monitor on set. If a particular effect isn’t marrying well with your backdrop, you can make an adjustment there and then.

As with any emerging medium, virtual production needed a champion to push it into the mainstream. In this instance, few could claim that crown more justifiably than The Mandalorian creator Jon Favreau. “In order for there to be a paradigm shift, you need a visionary leader,” says Bredow of working with the filmmaker.

Favreau had previously employed virtual production techniques on projects including The Lion King and The Jungle Book, but it’s his use of the tech on the flagship Disney+ show that has raised their profile. For The Mandalorian, the director worked with Stagecraft to create a purpose-built virtual production set—known as a ‘Volume’—at Manhattan Beach Studios in Los Angeles. Using the latest hardware, the setup could render a host of complex and exotic interstellar environments one after the other, eliminating the need for location shooting. “One of the things that made virtual production a perfect fit for The Mandalorian is that they had to create an entire series worth of Star Wars landscapes at the same cinematic quality that the franchise has always embraced,” explains Chris Bannister, ILM’s Executive Producer of Virtual Production. “The technology actually allowed them to shoot on all of these planets, which would have been really challenging to accomplish at the necessary level of scope and quality otherwise.”

Bredow recalls “an eye-opening day” on The Mandalorian shooting schedule, when the Mandalorian’s ship the Razor Crest had to travel to three different planets in a single day. “Because we were in Stagecraft,” he says, “we were able to bring the locations to us, rather than having to move the crew. They pre-loaded everything into the Volume and the art department dressed it three times in a day. It was very efficient. After everyone saw that day of shooting, there was no question. We were never going back—this had changed the way we make these kinds of shows.”

ILM now has three permanent virtual production stages, two in Los Angeles and one in London at Pinewood, and usually has one or two additional temporary facilities on the go. At present, the Stagecraft team are overseeing a pop-up Volume in Sydney, on which Thor: Love and Thunder is being shot (director Taika Waititi previously worked with Stagecraft on his episode of The Mandalorian). Coming up soon will be Ant-Man And The Wasp: Quantumania, which director Peyton Reed recently revealed is set to film in Stagecraft’s Volume at Pinewood. “It’s been exciting seeing different filmmakers take these creative tools and push them forward in different ways,” says Bredow.

But it’s not just ILM who are in on the act. Numerous companies around the world are setting up virtual production stages and employing the tech, not least Netflix, which has been building out its virtual production team in the U.S. and recently established its first purpose-built Volume in Europe at Germany’s Studio Babelsberg, the largest one on the continent to date. The first show to christen the new facility will be 1899, the ambitious pan-European period series from the creators of hit German original Dark.

Looking to the future, both Bredow and Bannister believe virtual production technology will become widely adopted across the entire industry. The pair note that on The Mandalorian it was often the more lo-fi scenes where the benefits shone through. “Werner Herzog’s character’s office was shot in Stagecraft,” says Bredow. “The production efficiencies it can mean for a scene like that are notable: the set dressing was only a few poles, some boxes, his desk, and accessories. The rest was loaded in digitally. That was quicker to build, faster to shoot in, and better for the environment.”

His final point is a salient one—as the entire industry tries to embrace going green, virtual production could be a boost to those efforts. “There’s a lot of construction that can’t be reused after a big production,” says Bredow. “You save on all of that with virtual production—you can use these LED walls for years. It does draw some power, but they’re quite energy efficient. You can also re-use backgrounds. We have generic locations from all over the world where people have commonly shot movies, such as Iceland. All you need to do is layer your own production design and set dressing.”

The Stagecraft team are keen to note that, while the majority of fully-fledged virtual production shoots to date have been blockbuster-level projects, their vision is for the tech to become viable for all levels of filmmaking. “Our target pricing has been to achieve a Stagecraft

day for less than the price of what it takes to move a production across the same town,” Bredow explains. “It can work out creatively and economically favorable. We find crews commonly shoot 30-50 percent more pages or coverage per day, depending on how they want to use that efficiency. It opens up the possibility for Stagecraft to be used on a wide variety of productions.”

Even as the world emerges from the pandemic and international shoots become less challenging, expect virtual production to continue to evolve and to see greater uptake across the business. ILM is investing heavily in the technology, which remains in a nascent form right now, and the ceiling of its application is far from being reached.

“It has really been light years between where we started and how far we’ve pushed it,” comments Bannister now. “I’m very excited to see the possibilities.”

Related posts:
July 8, 2021 Celebrities Comments Off on How ILMs Stagecraft Team Is Pushing The Boundaries Of VFX And Moving The Tech Forward Right Now
Celebrity News:
What Is Offset's Real Name?
How Did Courteney Cox Meet Boyfriend Johnny McDaid? What Is Their Age Difference?
It Was Love at First Sight When Track Athletes Tara Davis and Hunter Woodhall Met at Age 16
Scooter Braun Officially Files For Divorce From Yael Cohen – & Already Has A Prenup In Place!
OMG! Prince William Is Also Writing a Book After Harry's Memoir News
Recent Posts