The shady side of Prince Andrew has been a hot topic among royal watchers for decades, but it all came to a head when Jeffrey Epstein was charged with sex trafficking in November 2019, per the BBC, and their former friendship was thrust into the spotlight. Andrew soon “made a bad situation even worse” by speaking with the BBC and saying he had “no recollection” of meeting Virginia Roberts Giuffre — the woman who claimed she was trafficked by Epstein and forced to have sex with the prince when she was just 17 — despite being photographed together. Days later, Andrew announced he was stepping back from royal duties, but maintained his innocence and added, per the BBC, “I continue to unequivocally regret my ill-judged association with Jeffrey Epstein.”

Despite the growing scandal, Queen Elizabeth was “pleased to give” her son an honorary military appointment the following month, making him colonel of the Grenadier Guards in December 2019, even if his royal future is doubtful. Now, calls for him to be stripped of the title are growing louder as Giuffre filed a civil case against Andrew in August. She formally accused the royal of sexually assaulting her on three occasions in both London and New York, but that hasn’t changed the queen’s stance. Despite a Buckingham Palace spokesperson telling the Huffington Post that “all the duke’s military appointments are in abeyance [suspended] after he stepped back from royal duties,” Queen Elizabeth doesn’t appear to be backing down.

Is Queen Elizabeth really putting her reputation on the line? 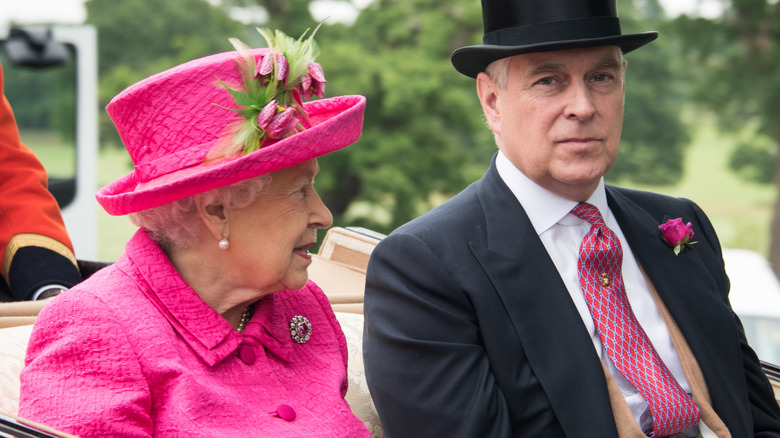 It seems Queen Elizabeth’s relationship with Prince Andrew is unshakeable. In August, military sources told The Sunday Times (via the Huffington Post) that they “all agree” Andrew “should go,” but “the queen has [seemingly] let it be known to the regiment that she wants the Duke of York to remain as colonel,” despite his duties currently being suspended. In sticking by him, Nigel Cawthorne, author of “Prince Andrew: Epstein, Maxwell and the Palace,” believes the monarch is putting her reputation on the line and appearing like a hypocrite.

Noting that “Harry was made to give up being Captain General of the Royal Marines,” he told Newsweek that while “it’s always been said that Andrew is the favorite son,” the queen “is surely tainting her own reputation if she is standing up for him in a relatively public way like this.” He added, “To the victims of Jeffrey Epstein, it’s like honor among thieves. Harry and Meghan must be very puzzled by this … It is not just a double standard,” he argued, saying, “Andrew is now accused of rape in the first degree.”

Charles Rae, co-author of “Diana: The People’s Princess,” agreed, telling GB News, “I’m surprised that the queen has made this decision given that the Grenadier Guards themselves, senior officials, are saying they don’t really want Andrew to be associated with the regiment.” He explained, “Basically, he’s colonel-in-chief of this regiment and he can’t do any colonel-in-chief duties because he’s not appearing in public … he’s not doing anything.”

If you or anyone you know has been a victim of sexual assault, help is available. Visit the Rape, Abuse & Incest National Network website or contact RAINN’s National Helpline at 1-800-656-HOPE (4673).