A long-rumored Season 3 of Netflix’s Master of None finally came to fruition this year, with Aziz Ansari and Alan Yang’s comedy series returning to the streamer in May. It had been four years since Season 2, which followed the series’ Season 1 debut in 2015 that won writing Emmys for Ansari and co-star Lena Waithe.

The latest incarnation of the Universal Television-produced show, titled “Moments In Love,” is fully written by Anzari and Waithe and centers on Waithe’s returning character Denise and her wife Alisha (played by BAFTA winner and series newcomer Naomie Ackie), and the ups and downs of their marriage.

The difficulties are crystalized in Season 3’s Chapter 4, like the full season written by Ansari and Waithe and directed by Ansari. It starts with Alicia heading to the fertility clinic to find out just what’s entailed in IVF – and the roadblocks put up by the system impacting LGBTQ couples trying to have babies. The script (read it below) is the latest entry in Deadline’s It Starts On the Page, a series that highlights the scripts that serve as the creative backbones of the now-underway TV awards season. The scripts are all being submitted for Emmy consideration this year and have been selected using criteria that includes critical acclaim, a range of networks and platforms, and a mix of established and lesser-known shows.

While the five-episode Season 3 does have links to previous seasons of the show which focused on the romantic trials and tribulations of Ansari’s Dev, the plot and the focus breaks new ground centered on Denise, a successful writer living the quiet life in the country with Alicia, a new character. That was intentional, Ansari said during Deadline’s Contenders TV panel recently.

“If you look back at any of the old interviews Alan and I did in Season 2, I think we were both pretty clear we didn’t really want to do the show again if it was the same kind of show,” he said. “We kind of exhausted what we wanted to say about me being a guy in my 30s and single in New York and eating food and running around.” 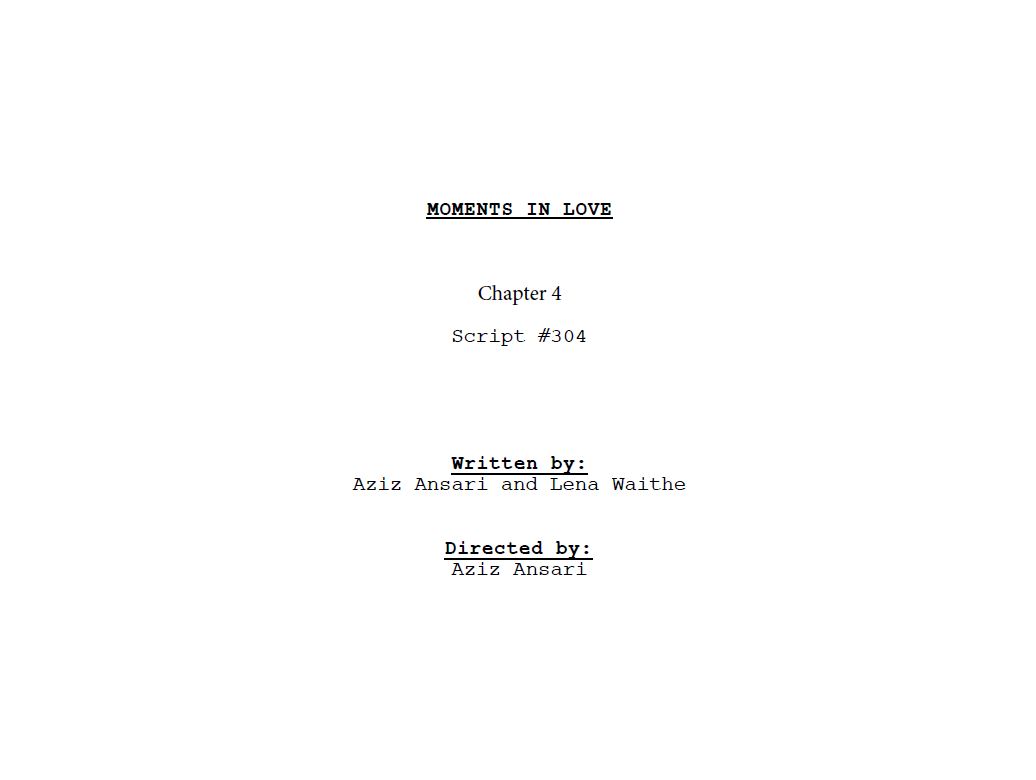 It Starts On The Page

It Starts On The Page: Read ‘The Handmaid’s Tale’s Season 4 Finale Script From Bruce Miller

It Starts On The Page: Read Billy Ray’s Script For Night 2 Of ‘The Comey Rule’

It Starts On The Page: Read The Script For The Penultimate ‘We Are Who We Are’ Episode From Luca Guadagnino, Francesca Manieri & Paolo Giordano

Related posts:
June 23, 2021 Celebrities Comments Off on It Starts On The Page: Read A Script From The Season 3 Return Of Master Of None
Celebrity News:
Selena Gomez Claps Back After The Good Fight Jokes About Her Kidney Transplant: It’s ‘Tasteless’
Kathy Griffin Reveals She's Battling Stage One Lung Cancer & Is Having Surgery To Get Half Of Her Left Lung Removed
Taylor Swift Narrates Inspirational Promo For USA Womens Gymnastics
Pregnant Louisa Lytton gives baby touching hand-me-down as she packs hospital bag
Why This SNL Cast Members Jokes About Simone Biles Have Twitter Seeing Red
Recent Posts