Jada Pinkett Smith just had the red table turned on her in a new candid conversation with her husband of 23 years, Will Smith.

Rumors of a so-called “open marriage” between the two resurfaced earlier this June when musician August Alsina claimed on The Breakfast Club that Will Smith gave him “his blessing” to have a relationship with Girls' Trip actor. “I totally gave myself to that relationship for years of my life, and I truly and really, really deeply love and have a ton of love for her,” Alsina said in the interview.

Despite Pinkett Smith's reps initially denying Alsina's claim, the Smiths sat down for a one-on-one episode of Jada's Facebook Watch series Red Table Talk to set the record straight. In an episode titled, “Jada Brings Herself to the Table,” the host admits to having an “entanglement” with Alsina, but reveals that she and Will were actually broken up at the time. “It got to the point where you gotta say something,” Will said at the start of the show.

According to both Will and Jada, their friendship with Alsina began when they helped him through an undisclosed health issue. Then, years ago, the couple decided to separate. “I was done with your ass,” Will said with a laugh. "Marriages have that though."

“We broke up. At that point in time, it was indefinite. From there, as time went on, I got into a different kind of entanglement with August," Jada clarified, before setting the record straight that no permission was granted by her husband. “One thing I want to get clear about and clean out one of the things that's kind of swirling about you giving permission, which the only person that can give permission in that particular circumstance is myself." 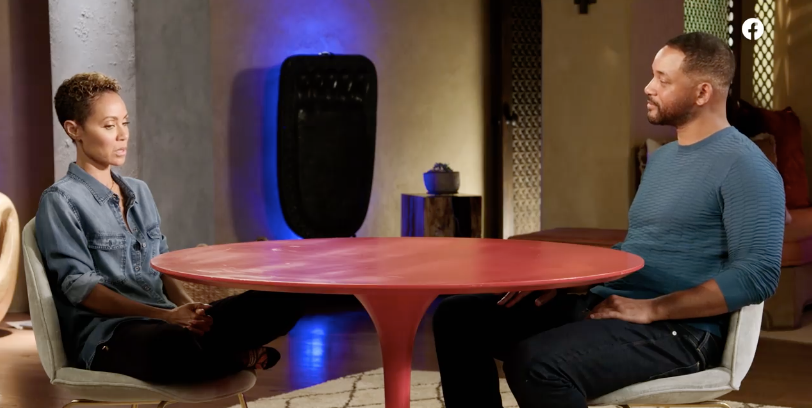 After Will gently pressed her to elaborate, Jada continued by confirming that she and Alsina had a relationship. “I was in a lot of pain and I was very broken. In the process of the relationship, I realized that you can't find happiness outside of yourself,” she said. "Luckily enough, you and I were going through a process of healing in a much different manner. I would say that we did everything we could to get away from each other only to realize that wasn't possible."

“I just wanted to feel good. it had been so long since I felt good and it was really a joy to help heal somebody,” she continued. "I think it has a lot to do with my codependency, which I had to learn how to break in the cycle. I think that whole process with Aug really showed me that and taught me that and I'm really grateful for that lesson.”

Another thing Jada hoped to make clear is that she doesn't consider the relationship a “transgression.” She said throughout her journey she was able to confront her own insecurities and do “some really deep healing.” Jada added that as she began to think about her relationship with Will, Alsina broke off communication and she has not spoken with him since. "It is a little weird that all this stuff is coming out now," she said.

Jada agreed, saying that she is grateful for the journey she and Will have been on together. "The one thing I'll say about you and I is that there have never been secrets,” she said. “We have really gotten to that new place of unconditional love.”

“We came together young and we were both broken in our own ways, and to be able to make mistakes without the fear of losing your family is so critical,” Will added. "There's a real power in just knowing someone is riding with you no matter what and you really can't know that until you go through some stuff."

You can watch their entire conversation, below:

Related posts:
July 10, 2020 Celebrities Comments Off on Jada Pinkett and Will Smith Say They Broke Up Before Her Relationship With August Alsina
Celebrity News:
Lili Reinhart Opens Up About Her Love of Sleep
Kristin Cavallari Is ‘Relieved’ Her Reality Show ‘Very Cavallari’ Is Over
Emily Andrea reveals husband Peter Andre is considering getting a vasectomy
DaBaby Sued by Hotel Employee Over December Physical Fight
Did Perez Hilton Cross A Line With LeBron James' Son?
Recent Posts
This website uses cookies to improve your user experience and to provide you with advertisements that are relevant to your interests. By continuing to browse the site you are agreeing to our use of cookies.Ok