Many “Jeopardy!” viewers were left upset on June 21 due to a clue that was both inaccurate and offensive. As AOL reported, guest host Savannah Guthrie read the item, which was in the “Plain-Named Maladies” category, and gave players the answer (which in this game, is basically the question) which read: “Postural Orthostatic Tachycardia Syndrome is also known as Grinch Syndrome because this organ is too small.” While the show was apparently referring to the human heart, that information happens to be wrong.

“Postural orthostatic tachycardia syndrome (POTS) is a term used to describe a group of neurological conditions that have similar symptoms,” according to Healthline. Those symptoms include “feel[ing] fatigued or dizzy” as well as “experienc[ing] heart palpitations or a significantly increased heart rate” when going from sitting to standing.

Beyond that, referring to POTS as Grinch Syndrome — associating having a small heart with the miserly character in the classic holiday story — is considered to be offensive by plenty of people. After fans of the show made their disappointment known with the arguably offensive and technically incorrect clue, “Jeopardy!” has now apologized. But is it enough? Read on for how people are reacting.

Jeopardy's apology was simple and straightforward, but was it enough? 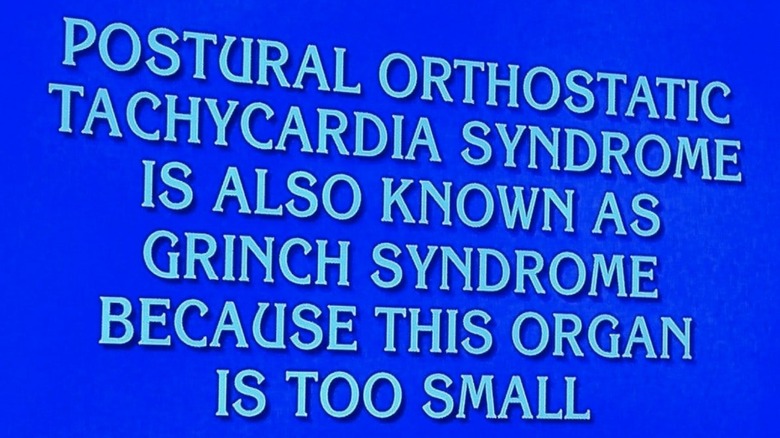 After fans called out “Jeopardy!,” the show took to Twitter to address the mistake. “Yesterday’s program included a clue about postural orthostatic tachycardia syndrome (POTS),” “Jeopardy!” tweeted. “After hearing from the community, we found we used an outdated and inaccurate term for this disorder, and we apologize.”

Some people accepted the apology, while others wanted more. One Twitter user wrote, “Thank you for setting the record straight. Please #DoBetter in the future!” Another person tweeted, “Thank you for the apology. However, we still don’t have an explanation as to how this term made it to air. … If there were more disabled and chronically-ill people working for you, this wouldn’t have happened.” While offering suggestions, the user added, “How are you going to make sure this doesn’t happen again? How are you going to make this right?”

Dysautonomia International — a non-profit that raises funds and awareness of autonomic nervous system disorders — also chimed in. “Grinch syndrome is an offensive term. Can you imagine Jeopardy making light of cancer or MS patients with a ‘funny’ name,” they previously wrote. After the apology, they posted again. “Thank you @Jeopardy. We accept … and appreciate that you were willing to listen to our patient community,” the organization tweeted. “We’d love to see some autonomic nervous system clues in the future! We encourage everyone to learn about POTS by watching this brief video.”

The clip is called “What is POTS?” Check it out!

Related posts:
June 23, 2021 Celebrities Comments Off on Jeopardy Apologizes After Outrage Over Offensive Clue
Celebrity News:
What Is Offset's Real Name?
How Did Courteney Cox Meet Boyfriend Johnny McDaid? What Is Their Age Difference?
It Was Love at First Sight When Track Athletes Tara Davis and Hunter Woodhall Met at Age 16
Scooter Braun Officially Files For Divorce From Yael Cohen – & Already Has A Prenup In Place!
OMG! Prince William Is Also Writing a Book After Harry's Memoir News
Recent Posts