Katy Perry graced fans with a new music video for her new single “Never Worn White” on Thursday, March 5. The song is a love letter to the singer’s current fiancé, Orlando Bloom, about the couple’s engagement and Perry’s nerves over becoming a wife. This begs the question: what color was Perry’s wedding dress when she married Russell Brand?

“But I’m scared / ‘Cause I’ve never worn white / But I wanna get it right,” Perry sang in “Never Worn White,” referencing her previous nuptials. Perry and Brand revealed they were dating back in 2009. The couple then got married in 2010, at the height of Perry’s “Teenage Dream” era, in Northern India at a tiger sanctuary. The wedding reportedly mixed traditional Hindu and South Asian customs with Perry’s Catholic upbringing throughout the ceremony. For the ceremony, Perry wore a traditional wedding gown made by Lebanese designer Elie Saab. The dress came from his 2010 fall Haute Couture collection and was a dove-gray color with lace sleeves, intricate embellishments, and a subtle sparkle. She also wore custom beaded, satin heels.

According to PopSugar, other notable details from Brand and Perry’s wedding include that the couple reportedly included elephants in the ceremony and had matching Henna tattoos. Perry also reportedly wore a Nath (a traditional gold nose ring with a chain that stretched from her nose to her ear) and other gold jewelry. It was also apparently an incredibly private ceremony; the couple reportedly only had 80 guests join them. 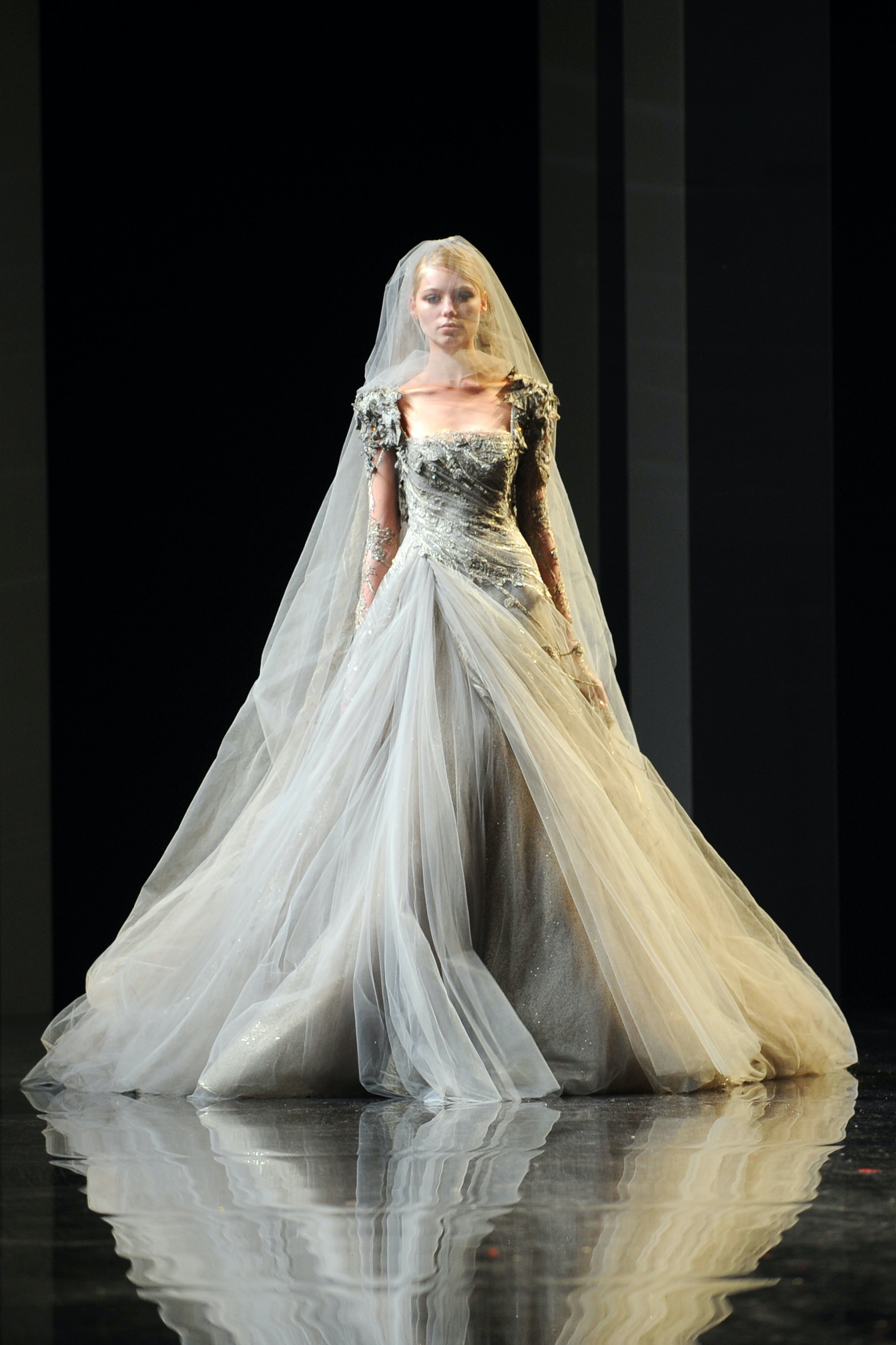 Since her first wedding, Perry has worn Saab a few times. Most notably, the singer matched a blue Saab dress to her blue hair at the 2012 Grammy Awards. The Lebanese designer is known for his maximalist gowns, which definitely suited Perry at her first wedding, and he has also dressed Beyoncé, Taylor Swift, Rihanna, and a plethora of other stars.

After her divorce from Brand in July 2012, Perry then started dating Bloom in 2016. Since then, the two got engaged in February 2019 and are now expecting their first child, per the sweet reveal at the end of “Never Worn White.” But while Perry didn’t wear white in her first marriage, earls ‘00s kids will likely remember Perry’s iconic wedding romper-and-skirt combo from “Hot N Cold” (2008).

Although Perry and Bloom have been engaged for over a year now, details about their wedding are still incredibly vague. Nevertheless, “Never Worn White” is clearly a heartfelt declaration of love toward Bloom, and Perry seems ready to walk down the aisle soon.