Women fight back… and it only adds to the tension in the National’s latest triumph: LIBBY PURVES reviews Othello

Verdict: Clash of the titans

The matter of racism is always present in this play, and here strongly stated: Othello’s noble speech about his wooing of Desdemona — ‘she loved me for the dangers I had passed, and I loved her that she did pity them’ — meets bigoted shouts. Roderigo waves a noose.

Most British productions, however, make it clear that Othello is a gentleman, a general: his eloquent speeches mark this nobility, and only yobbish villains see him as some kind of savage.

Yet Clint Dyer, the first black director to do a major production of the play at the National, hints that his Othello has some innate dangerousness, alien even to his fellow soldiers.

Giles Terera opens with a spear-carrying dance and moves with a slinky athleticism. And when Iago has just sown the seeds of jealousy, above the Moor’s solitary agony the cast behind are dark figures in crude horror-movie black masks — white eyes, red lips, the full minstrel caricature. I still don’t know what to think . . . I certainly felt very uneasy. 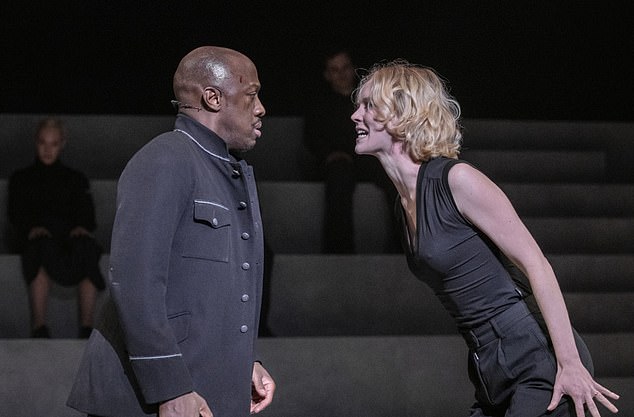 That uneasiness, though, is perhaps the triumph of the production. It’s an unadorned monochrome scene: courts, brawls and bedchamber framed on three sides by vast tiers to a high flat parapet. Sometimes a soliloquy is watched by the cast sitting immobile on those steps: the programme calls them simply ‘System’.

Paul Hilton’s Iago is terrifyingly efficient in his gaslighting of Othello and visually his elegant opposite: a cold, officer-class figure, his narrow, pale face with its clipped moustache (my companion was reminded of Oswald Mosley).

But as the story moves to its fearful end, it underlines another aspect of ‘System’: toxic misogyny. It’s all in the text, as the men, even good Cassio, speak scornfully of women as objects to be won and owned and never believed.

And the women shine: Rosy McEwen is a less gentle and more defiant Desdemona than some; assuredly Sloaney, meeting her husband’s accusations as much with scorn at their absurdity as with hurt.

Emilia (Tanya Franks) — harshly treated by Iago — seems gigglingly commonplace at first, but she, too, rises to heroic defiance. In the final murderous scene, their two heads — one golden and one flaming red — are the only pops of colour in that dark world. Maybe we sometimes need a cold, angry production like this.

James Graham’s play The Best Of Enemies — a Young Vic production getting a deserved West End run — is about the TV confrontations between arch-conservative political commentator William F. Buckley and the maverick gay liberal writer Gore Vidal during a U.S. election. But it also neatly prefigures today’s divisions, demonstrations and intolerances. 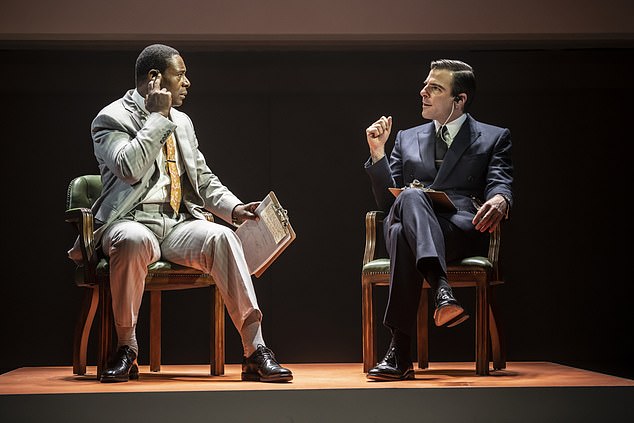 As I was leaving the show, a lad far too young to remember 1968 said sadly: ‘It was the beginning of Now, wasn’t it?’ He was right.

Thrillingly staged with projected news footage and sharply evoked riots in almost filmic fragments, it recreates the world of Martin Luther King and Enoch Powell, Andy Warhol and Richard Nixon, while above it hang screen-shaped boxes where TV executives compete and plan.

But it speaks loudly to us now, because this was the moment when television companies first sought ratings with attention-grabbing rows.

At its centre, feline and vain and teasing, is Gore Vidal, played by Zachary Quinto (Spock in the rebooted Star Trek films). His opponent Buckley is, brilliantly, the black actor David Harewood.

There is a sharp joke when, in a flashback, he approvingly interviews Enoch ‘rivers of blood’ Powell, and there is real cleverness in that casting by director Jeremy Herrin: Right-wing speeches about how Leftish- liberals don’t understand working people need not emerge only from white faces.

As a play it never flags and there are memorable cameos: brawny John Hodgkinson doubles as the senatorial anchorman Howard K.Smith as well as an unforgettable roaring, ranting Mayor Daley of Chicago.

Syrus Lowe is a thoughtful James Baldwin; and as Aretha Franklin Deborah Alli belts out the Star-Spangled Banner like a torch song, to the horror of the old-school conservatives.

A wonderful opera — and you can take your 10-year-old!

Yes, folks, It’s A Wonderful Life at the Coliseum really is heart-warming, while at the Royal Opera House, Tosca is the usual everyday story of torture, stabbing and suicide.

IAWL, rather remotely based on the movie starring James Stewart as the desperate George Bailey, is a family musical with operatic pretensions — I can imagine my ten-year-old granddaughter lapping it up.

Two radical changes have been made from the film — the Bailey family are now African-Americans and George’s cuddly guardian angel Clarence is now Clara (the super-chic soprano Danielle de Niese). Composer Jake Heggie’s music is of the ‘stream of lyricism’ variety and you can tick off his influences, including Leonard Bernstein, as they go by. There is nothing you can call a song but little leitmotifs do impinge on the consciousness. 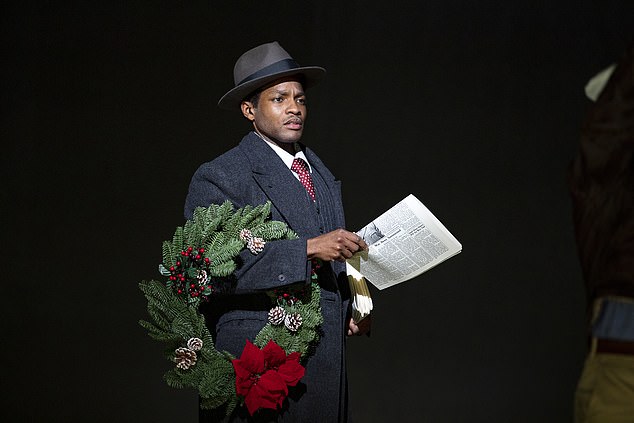 George, whose attempts to leave good ol’ Bedford Falls and see the world are constantly thwarted, is sung by Virginian tenor Frederick Ballentine, who has a good voice but is somewhat vertically challenged — his ‘little brother’ Harry (Donovan Singletary) towers over him.

Michael Mayes, in the Lionel Barrymore role, makes a nasty villain — an insult to the glorious name of Potter — and Jennifer France as George’s wife, Mary, also stands out.

Nicole Paiement conducts skilfully and the staging (direction by Aletta Collins, sets by Giles Cadle, costumes by Gabrielle Dalton, lighting by Andreas Fuchs) has a goodly amount of festive glitter and good cheer.

The latest Tosca revival at the ROH features an interpretation of the title role by Malin Bystrom that all opera lovers should see. The Swedish diva sings magnificently and relishes the text.

Gabriele Viviani is powerful as the loathsome chief of police Scarpia and Welsh tenor Gwyn Hughes Jones — pretty average as Tosca’s lover, Mario, for much of the evening — comes to life in his great Act 3 aria.

In the pit, Daniel Oren marshals the orchestra and chorus well enough. If you missed Callas, why not give Bystrom a try?

Jasmine Naziha Jones witnessed the Gulf War and the occupation of Iraq as a child. Not at first hand. She was safely at home in the UK, picking up bits and pieces from the news and not making much sense of what they meant. She was also observing the agonies of her Iraqi father as he watched in horror as his beloved Baghdad was bombed to blazes and his family torn apart.

Her semi-autobiographical debut play tells her story through the eyes of Darlee, played by herself with the leg-scratching, eating-with-mouth-open gormlessness that is a shorthand for being childlike. Spitting out pickles at McDonalds is more convincing. As the play takes her to her 20s, so her performance becomes more persuasive.

There is no doubting Naziha Jones’s mission: inherited trauma and the legacy of being a second-generation immigrant are important issues.

Her dramatic ambition to suggest how Darlee perceives the adult world is similarly admirable but problematic.

Sad, nostalgic Dad (a moving Philip Arditti) frequently passes out; and a sort of chorus of a youngish woman, an elderly lady and a devilish-clownish man pop up, presumably in Darlee’s imagination, and force her to process misunderstood memories.

Racial prejudice, linguistic and cultural misunderstandings are enacted in an enlivened comic-strip style as the trio slip into various guises.

At a fundraiser for homeless Iraqis, a posh Sloane boasts about donating two feet of his colon for reconstructive surgery for injured infants while another debates the pronunciation of ‘E-racky’.

The Dad’s landlady tells him not to do any ‘secret bum-washing with the gravy boat in this house’ and a hygiene battle wages between showering and loo-paper. Sucking marrow from a lamb bone is considered bad manners.

Some observations are sharp and amusing: why indeed do the British begin so many sentences with ‘I’m afraid…’ Others less so. Does anyone confuse the word ‘onion’ with ‘annoying’?

In a sudden, indigestible though welcome change of gear, an adult Darlee, blood encrusted on her face, is interrogated by a university admissions panel about her roots — ‘What do I think of Saddam?’ — prompting a tremendous rhythmic, rhyming aria. Out pours her heart and, with it, her eloquent political intelligence. Followed by her father’s grief and anger, this time in rhyming couplets, with more muscle and emotion than is conveyed in the previous two hours.