Miles Teller was attacked by two strangers while vacationing in Hawaii, his wife claims.

Keleigh Sperry Teller, 28, took to her Instagram Story on Friday night claiming the “Whiplash” actor was “jumped by 2 men we have never met after they trapped him in a bathroom.” She did not share what injuries, if any, he sustained.

Keleigh’s revelation came hours after a TMZ report claimed the 34-year-old actor was “punched in the face” over a dispute about money. However, Keleigh said the details of the report were “completely false.”

Teller’s wife went on to claim the Maui incident is now being criminally investigated. Reps for Teller and the Maui Police Department (MPD) did not immediately return Fox News’ requests for comment. 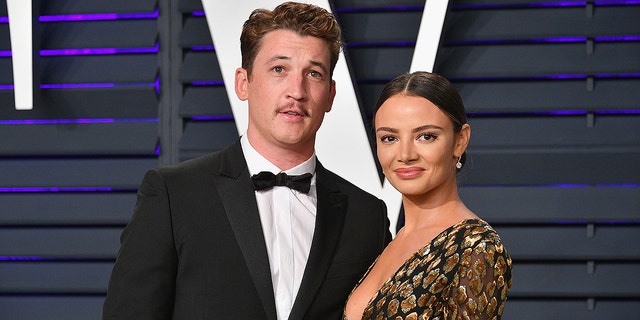 In a statement on Friday, a spokesperson for the MPD told People that police “responded to a report of an assault that occurred at a West Maui restaurant involving a male victim and one responsible party.” The spokesperson confirmed authorities are investigating the matter. The statement did not make mention of a second suspect and said it could provide “no further information” at the time.

The Tellers were joined earlier in the week in Maui by football pro Aaron Rodgers and his fiancee, actress Shailene Woodley. Photos posted to Keleigh’s Instagram showed the two couples cliff jumping and hiking.

In one post, Keleigh referred to her spouse, Rodgers and Woodley as her “soulmates.” The foursome also took a selfie with a picturesque body of water and sunset in the background.

“Happiness,” Keleigh captioned a series of photos of the group on Instagram.

Rodgers, 37, confirmed his engagement to Woodley, 29, back in February. The Green Bay Packers quarterback later said proposing was one of the best things that happened to him over the last year.

Related posts:
May 29, 2021 Celebrities Comments Off on Miles Teller jumped by 2 men after being 'trapped' in bathroom on Hawaii vacation, his wife claims
Celebrity News:
The Best Portable Chairs for Music Festivals and Outdoor Concerts
Gov. Cuomo Doubles Down in Denial of Inappropriate Touching
Courtney Love Apologizes After Accusing Trent Reznor of Abusing ‘Girls as Young as 12’
Who Is Carly Lawrence From Too Hot To Handle?
‘Dull as Prince William’ John Cleese aims jibe at royals as he bemoans Euro 2020 matches
Recent Posts