Major League Soccer says its players are NOT getting the Fyre Festival treatment inside the Disney bubble — claiming the players who posted sad sandwich pics are NOT inside the restricted area.

Toronto FC defender Omar Gonzalez posted a pic Tuesday showing an “MLS Is Back” In-Room dining menu which describes some delicious-looking, expensive food options ($65 for lunch!) … cut next to an unimpressive sando in a brown box. 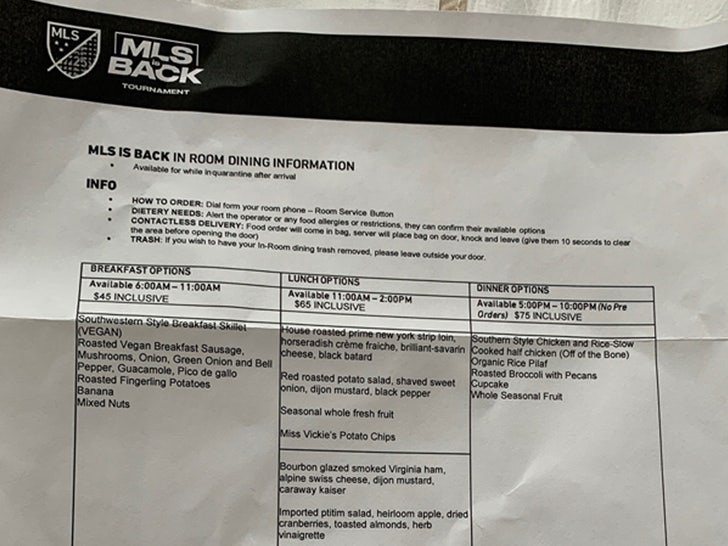 He tweeted out, “Yummm” … leading people to believe the widely-touted Disney bubble was looking more like a sham than a glamorous experience.

Omar’s teammate Eriq Zavaleta added fuel to the fire by posting another unappetizing sandwich pic. Not a great look.

But, our MLS sources tell us … those two players are not yet in Orlando — they’re still in Toronto.

The league is unsure who shot the photos — but reps say the food was served at a quarantine site OUTSIDE the official bubble where players are required to stay for 10 to 12 hours until they are cleared to enter.

There is basic food service at the quarantine site — like sandwiches, etc — but since it’s essentially a layover spot, the food service isn’t as robust.

Once players are allowed into the Walt Disney World bubble environment, it’s a completely different story.

We’re told players will get “banquet meal” service served in their club meal rooms — and so far, the feedback on the food has been super positive.

Also, all players will have access to 4 restaurants in the bubble — including Shula’s Steak House, Todd English Bluezoo, Il Mulino, and Kimonos sushi restaurant.

We’re also told, “Players do not pay for meals.”

So, yeah … the travel meal might not be the fanciest food in the world, but MLS insists they’re not pulling a Billy McFarland.

Related posts:
June 2, 2021 Celebrities Comments Off on MLS Says 'Fyre Fest' Sandwich Pics Are BS, Not From Inside Disney Bubble!
Celebrity News:
Cop Under Investigation After Video Shows Him Kicking Suspect in Head
John Legend Defends Chrissy Teigen, Accuses Michael Costello of ‘Fabricating’ DMs
Why Ant Anstead Left His Belongings Behind After His Divorce From Christina Haack
How Many Grandchildren Does Jimmy Carter Have?
Dax Shepard Jokes About ‘Three-Way’ Marriage With Kristen, Podcast Cohost
Recent Posts