Over the past year, production designers needed to get creative in how they approach their work on films or television shows. For Solos, that involved production designer Ruth Ammon adapting to a completely virtual art department from home. “We were building 3D designs,” Ammon says, “and we actually had a virtual reality designer who would take our designs and turn them into proper virtual reality sets.”

Solos, an anthology series created by David Weil, is an exploration of what it means to be human. In seven unique stories, different characters deal with isolation and what it means to be alone in uncertain times. They discover connection to each other in the shared human experience of searching for togetherness. 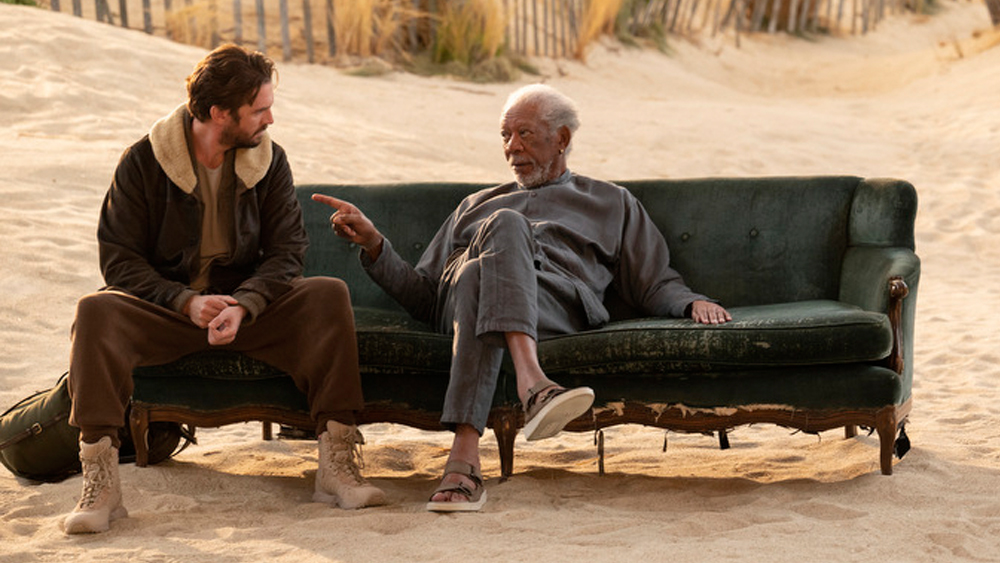 In the episode title “Leah,” Anne Hathaway plays the title character as she tries to discover the secret of time travel. Leah is a brilliant scientist with a laboratory in the basement of her mother’s home. “That was a replica of one of the houses I grew up in,” says Ammon, “but it’s updated for Anne Hathaway’s generation.” The setting for the basement lab is filled with equations written on the wall, advanced computers, and an assortment of light bulbs stemming from both the floor and ceiling of the room. “We were inspired by taking the idea of low-tech and high-tech and mixing it up,” she says.

Though much less chaotic and layered than the set in “Leah,” Ammon says the beachfront for “Stuart,” with Morgan Freeman and Dan Stevens, was the most difficult to accomplish virtually. “It’s all compound curves and, as designers, we’re all very familiar with lumber and the angled materials you use to build structures,” she says, “so to build and shape land forms that have been wind swept that has been wave swept was really challenging.”

Due to COVID, all of the episodes needed to be shot on a stage, so the beach needed to be built from scratch. “That it was all stage work was a little bit frightening for some of these extreme environments,” she says, “but it was a challenge I was really excited to be part of.”

Related posts:
June 1, 2021 Celebrities Comments Off on ‘Solos’ Production Designer Ruth Ammon On Running A Virtual Art Department During COVID: “It Was A Challenge I Was Really Excited To Be Part Of”
Celebrity News:
Garrett Hedlund Arrested For Public Intoxication After Split From Emma Roberts Report
A Place In The Suns Craig Rowe speaks out on health concern amid property drama
Kim Kardashian's Touching Tribute To Late Fashion Designer Thierry Mugler
Nick Cannon Pens Sweet Tribute to Late Son Zen: Missing My Little Dude
Jennifer Coolidge got a guest spot on Thank U, Next by DMing Ariana Grande
Recent Posts