Kylie Jenner and Travis Scott have reunited for a play date with Stormi, and the cosmetics mogul documented the trio’s Memorial Day water balloon fight.

Kylie Jenner, 23, and Travis Scott, 29, have reunited on Memorial Day Weekend for some fun in the sun with their daughter Stormi, 3. The trio proved they were ready for summer when they got together at Kylie’s mansion in Calabasas for a friendly water balloon fight next to a white jumping castle. In a series of Instagram Stories shared by the cosmetics mogul on May 31, little Stormi was seen rocking a bright yellow Fendi dress, which retails for around $500, with side cut-outs on her waist and matching sandals. Talk about a fashionista in the making!

“Love this little baby,” Kylie captioned a clip of her mini-me walking into the house. When the mother-daughter duo were joined by the “Sicko Mode” rapper, the cosmetics queen was heard saying, “Don’t throw it at me,” as Travis and Stormi teamed up to throw blue water balloons at the reality star. “You can’t get me now,” she was heard saying in a subsequent clip, as she hid behind a glass wall.

The family play date comes one day after the trio hit up Target before spending some time at a playground in the evening. The AstroWorld rapper shared a flirty moment with his ex, whom he split from in 2019, while on a Hold-N-Spin! Kylie and Travis were both laughing away as they lifted their feet off the ground, allowing the contraption to pick up speed. 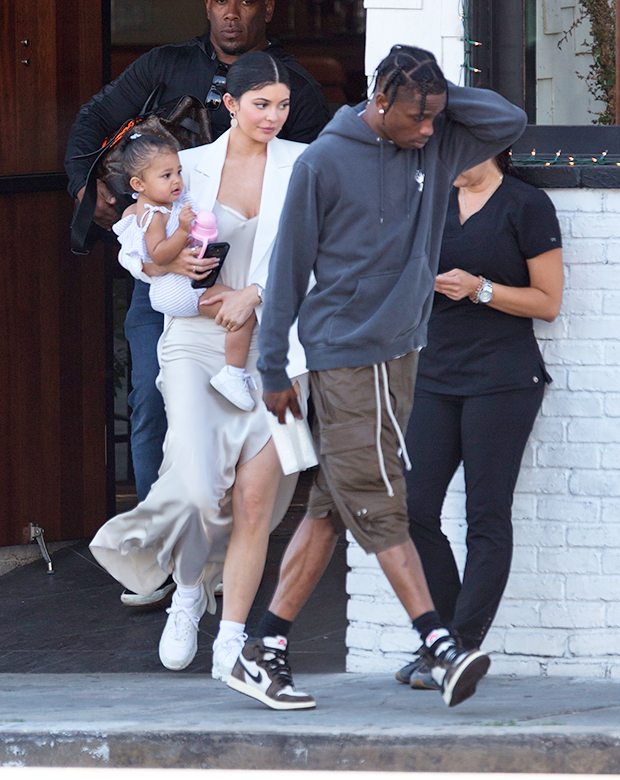 The on again/off again couple, who welcomed their adorable daughter in 2018, recently sparked romance after an outing to Disneyland on May 18. The pair were spotted with Stormi and her cousi Dream Kardashian, 4. The foursome appeared to have a fun time time at the happiest place on Earth, going on classic rides like the Alice in Wonderland tea cups and Snow White’s Enchanted Wish!

Shortly after the theme park outing, reports surfaced that the Keeping Up With The Kardashians star was in an “open relationship” with the rapper, which she flatly denied. “You guys really just make up anything,” Kylie tweeted on May 21, along with a screenshot of a tabloid news report. “I’m not discrediting anyone who is in an open relationship but it’s just careless and disrespectful to throw this narrative out there without knowing what’s true,” the Kylie Skin CEO also noted.