Gigi Hadid and Zayn Malik welcomed their baby girl to the world on the weekend of Sept. 19, and they’ve already received one very special present from a famous friend. Although the model’s first child has likely received quite a few special gifts from celebs, Taylor Swift’s definitely stole the show. Recently, fans got an up-close glimpse at Taylor Swift’s gift for Gigi Hadid’s baby girl, and it’s way too cute.

On Hadid’s Instagram Stories on Friday, Sept. 25, the runway model posted a snapshot of her baby’s hand. In the photo, the baby girl is snuggled up in a white graphic top sent from "Auntie" Donatella Versace and a pink satin blanket. Her daughter’s hand is resting on the blanket in the picture, which Hadid pointed out was from "Auntie" Swift. "Auntie @taylorswift made this!!," Hadid wrote.

Swift and Hadid have been tight-knit friends since 2014, so it makes sense the "Cardigan" singer would give a gift with meaning. Although Hadid and Malik have yet to reveal their daughter’s name, it’s easy to speculate that the blanket may also have a similar feature as one of Swift’s other presents. Swift sent a baby blanket to Katy Perry and Orlando Bloom for their newborn daughter, Daisy Bloom.

Little Bloom’s baby blanket is also pink satin and features the embroidered words "Baby Bloom" and a flower, which Swift did herself. Perry revealed the thoughtful gift on Instagram on Sept. 13, writing, "Miss [Daisy] adores her hand-embroidered blankie from miss @taylorswift." The "Smile" singer continued, "Hope it’s one she drags around for years till it becomes an unrecognizable shred that she keeps in her pocket as a teenager."

There’s not a full view of baby Hadid, nor the blanket in the snapshot, so one can only wonder if there’s embroidery hiding somewhere off camera. 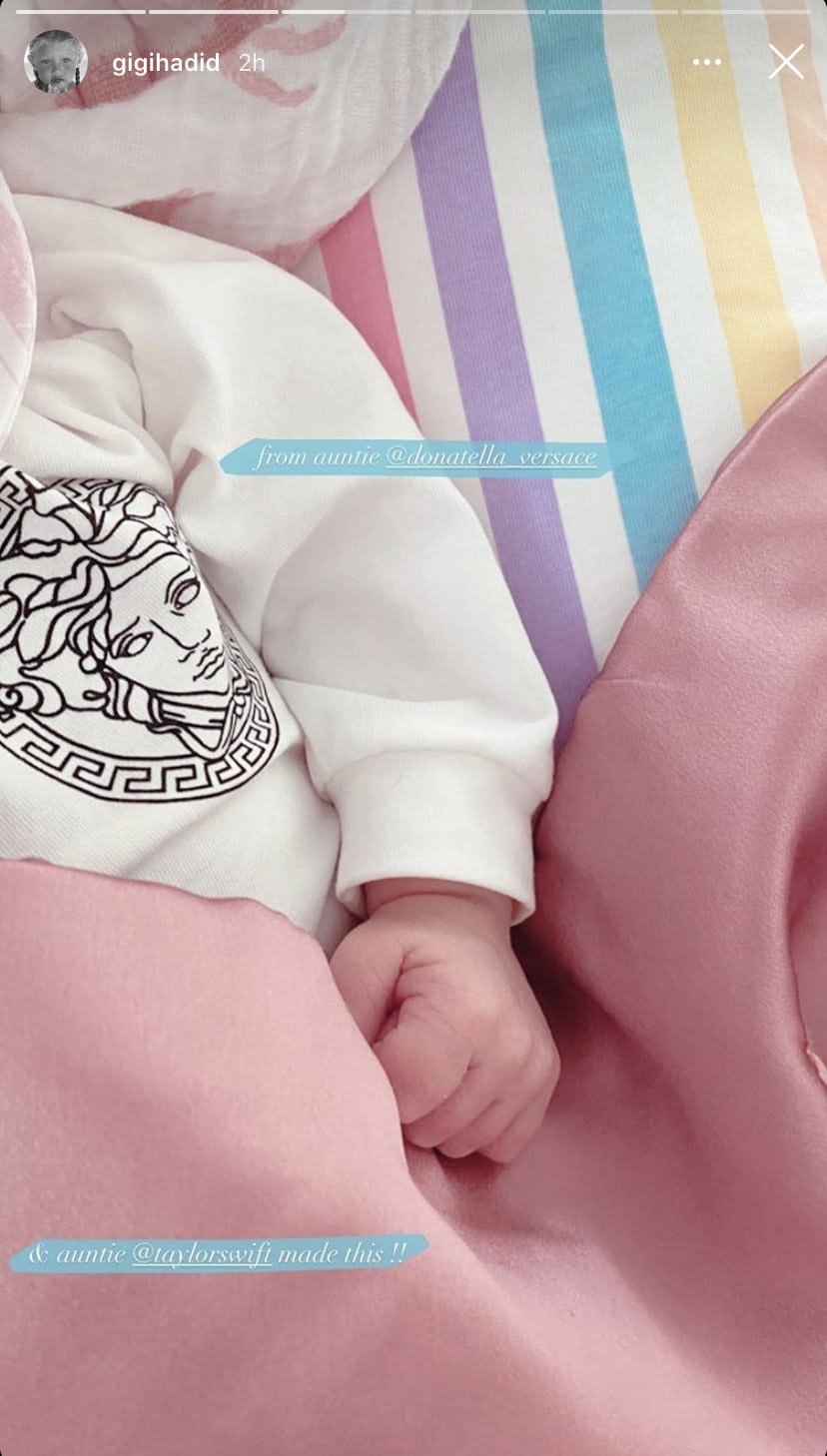 Hadid and Malik announced the birth of their baby on Instagram on Wednesday, Sept. 23. Hadid’s post featured a black and white snapshot of her baby’s hand, and Malik’s resting gently over her. "Our girl joined us earth-side this weekend and she’s already changed our world. So in love," wrote the model.

Malik echoed a similar sentiment in his post, which featured a photo of him holding his baby’s hand. "Our baby girl is here, healthy and beautiful," he began. "To try put into words how I am feeling right now would be an impossible task. The love I feel for this tiny human is beyond my understanding. Grateful to know her, proud to call her mine, and thankful for the life we will have together x," he concluded. For now, it seems like fans will have to be patient and wait for the new parents to reveal their baby girl’s name and if there’s more to T-Swift’s baby gift.

Related posts:
September 26, 2020 Celebrities Comments Off on Taylor Swift’s Gift For Gigi Hadid’s Baby Girl Is The Sweetest Ever
Celebrity News:
Iggy Azalea shares photo of Onyx Carter after split from baby father Playboi Carti
Katie Piper hits back at cruel troll who called her ‘repulsive’ and ‘ugly’ following recent eye operation
Ne-Yo Plans to Have New Baby to Seal Reunion With Wife
Larenz Tate Reveals Jada Pinkett Smith Turned Down Role in 'Dead Presidents' Because of Tupac Drama
What you didn’t know about Borat star Maria Bakalova
Recent Posts
This website uses cookies to improve your user experience and to provide you with advertisements that are relevant to your interests. By continuing to browse the site you are agreeing to our use of cookies.Ok