Britain has long enjoyed a close relationship with the United States—and that continued today, as a Buckingham Palace spokesperson confirms to BAZAAR.com that the monarch sent a private letter to President Joe Biden ahead of his January 20 inauguration ceremony.

Although the palace maintains that the contents of the note will remain private, it is sure to be the start of a friendship between the two leaders. The queen has met every U.S. president, except Lyndon B. Johnson, since the beginning of her reign in 1952 and will no doubt invite the president for an official state visit to the United Kingdom in the future. 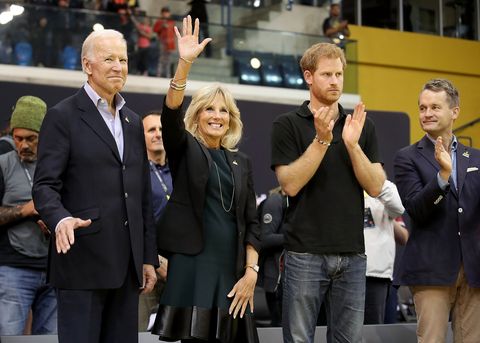 The Bidens already know one member of the British royal family well. In 2013, Dr. Jill Biden welcomed Prince Harry to a reception for British and American wounded servicemen and women during his visit to the United States. A year later, Harry invited Jill to attend the Invictus Games in London, where she and the Duke of Sussex were regularly seen chatting and laughing together.

At the time, Joe—who also hung out with the prince at the 2017 Invictus Games in Toronto—joked to Britain’s Guardian newspaper, “My wife was with Prince Harry at the Invictus Games.” He remembered reading in the news that “everywhere Prince Harry went, he had this blonde woman on his arm.” He quipped, “The vice-president’s wife! I’m a little worried here, you know what I mean?”