Samsung welcomed some surprise guests to join them for their “Unpacked” event this week, which introduced five new products to Samsung’s suite of Galaxy devices. The electronics brand tapped the guys in BTS to help unveil Samsung’s brand new smartphone — the Galaxy Z Fold2.

The foldable phone is the third folding phone to be introduced by Samsung, after the Galaxy Fold (available unlocked at BestBuy) and the compact Galaxy Z Flip. Though BTS didn’t appear in-person at the event, they did appear via a short video, which showed RM, Jin, Suga, J-Hope, Jimin, V and Jungkook unboxing the new device and testing out its features.

Samsung has been going after the “foldables” category in mobile devices for a few years now (not to be confused with Motorola’s recent re-issue of its popular Razr flip phone) and the Galaxy Z Fold2 features a virtually seamless design when opened up, with an edge-to-edge, nearly bezel-less display. When folded, it’s a pocket-sized cell phone; when flipped open, it’s basically a 7.6-inch portable tablet (something RM notices right away).

The guys also have fun testing out the camera in the unboxing clip, with J-Hope as the dutiful model. Samsung has yet to announce the exact camera specs of the new phone, but it’s expected to be in line with the also recently-announced Galaxy Note 20. That would deck out the phone with a 64MP lens, 12MP main sensor and a 12MP ultra-wide sensor. As Taehyung demonstrates in the unboxing clip (much to to Hoseok’s delight), there is also a very powerful zoom feature, both when taking photos, and when zooming in on pics on the screen.

BTS unboxed the “Mystic Bronze” version of the device (as you can hear RM saying 0:14 into the clip); Samsung will also introduce a “Mystic Black” version, along with a limited-edition collaboration with American fashion designer Thom Browne.

Pricing for the Galaxy Z Fold2 has yet to be announced, though it’s expected to come in slightly less than the $1980 price tag of the original Galaxy Fold. The brand says full specs and pricing details will be announced in September, but fans of BTS and Samsung can reserve the phone now on Samsung.com. 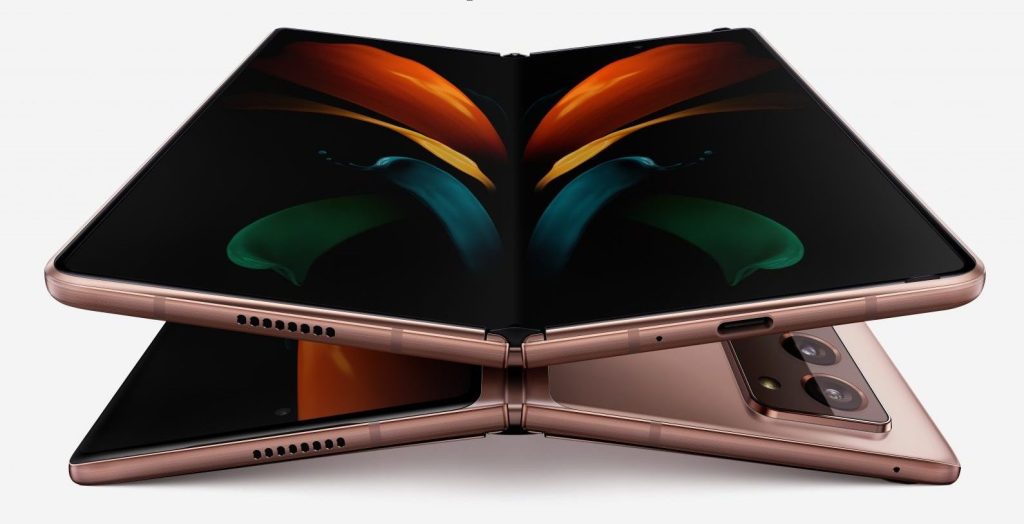 This isn’t the first time BTS has teamed up with Samsung and the pop phenoms. The group released their own BTS versions of Samsung’s Galaxy S20 Plus phone, and the Galaxy Buds Plus earphones, earlier this summer. The limited-edition phone and earbuds are still available online here.

As for Samsung, the new phone was among a slew of new releases unveiled by the brand this week. The electronics giant also announced a new Galaxy Watch3 (which can do everything from tracking steps to measuring blood pressure and oxygen levels) and the Galaxy Buds Live, which takes aim at Apple’s domination of the wireless earbuds market, with a new ergonomic set of buds with bigger speakers for more defined sound, and Active Noise Cancellation to tune out distractions. It’s all packed into a consumer-friendly $169 price point. Both the Galaxy Watch3 and the Galaxy Buds Live are available to order now on Samsung.com.

Related posts:
August 7, 2020 Celebrities Comments Off on Watch: BTS Meets QVC as the Group Posts Unboxing Video of New Cell Phones
Celebrity News:
‘Brave New World’ is Cancelled by Peacock After One Season
Bill Maher says Ruth Bader Ginsburg 'should've quit' under Obama: She didn't 'take the hint'
Kylie Jenner Says She's Exercising Her Right to Vote 'For My Daughter'
Luke Evans Shuts Down Breakup Rumors by Posting New Picture With Boyfriend
Kim Kardashian West Does Not Like Being Filmed From the Waist Down, Director Claims
Recent Posts
This website uses cookies to improve your user experience and to provide you with advertisements that are relevant to your interests. By continuing to browse the site you are agreeing to our use of cookies.Ok