The crossover that WWE and Marvel fans have been waiting for has finally happened – and no, it’s nothing to do with Drax the Destroyer.

WWE’s own version of The Hulk, current champion Brock Lesnar, has been confirmed as existing in the Marvel Universe.

In the latest Marvel comic, Avengers #31, Tony Stark finds himself all the way back in prehistoric times (1,000,000 BC to be exact) after discovering a fossilised Iron Man helmet.

And while battling some prehistoric Avengers, Iron Man is feeling his usual quippy self, as he tells his foes: “Look, Ghost Rider Snuffaluffagus and Brock Lesnar Starbrand are one thing, but no way am I getting slapped around by Thor’s daddy!” 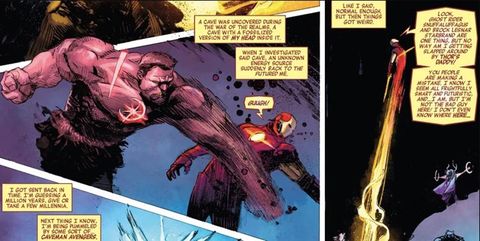 The reference means that Iron Man is at least aware of the WWE Champion and former UFC heavyweight. Plus, given Tony’s vast wealth, we wouldn’t be surprised if he’s hung out with Vince McMahon in the past.

And if the Avengers ever need some extra muscle (or Hulk needs a few days off), Brock would be a pretty good fit with the group.

This is not the first link between WWE and Marvel. Former WWE Champion Dave Bautista stars as Drax the Destroyer in the MCU movies, while another former champ, CM Punk, has written for Marvel Comics’ Drax series. 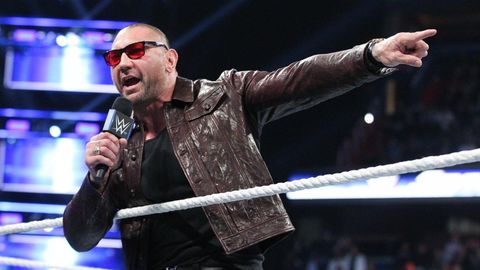 Brock is currently preparing to defend his WWE Championship on April 5 at WrestleMania 36 against Royal Rumble winner Drew McIntyre.

He is currently in his fifth reign as WWE Champion, having won the belt from Kofi Kingston in October 2019 during the SmackDown 20th Anniversary show.