Zoe Ball has revealed how she unluckily experienced her first ever symptoms of the menopause during an interview with Robert De Niro and Al Pacino. It is a highlight of the BBC Radio 2 host’s career, but didn’t go off as planned.

The 50-year-old recalled what happened while alongside the A-listers, in a candid new interview today.

The mother-of-two didn’t realise until a year later that it was her first menopausal hot flush.

And it didn’t arrive at an opportune moment, when she was live on air on the breakfast show in 2019.

Zoe said not only was she struggling with temperature but was also “damp and red”. 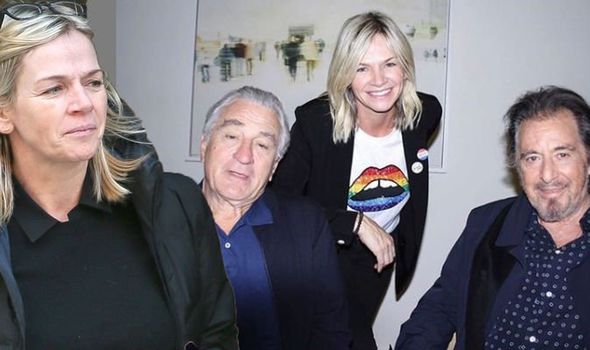 Remembering how it started, she said: “Even when they greeted each other it was like so many scenes from every film they’ve ever made suddenly happening in front of you.”

Saying their chat had been “going great”, Zoe continued: “But suddenly I could feel it coming.

“This great heat. It’s kind of damp as well, and you go quite red.”

The former wife of Fatboy Slim said her glasses were steaming up and sliding down her nose in the “tiny room”.

She went on: “I could see Al Pacino looking at me sort of willing me to get to the end of the question.

“Which had no point to it by now, since I was on fire.”

12 months later it became clear to Zoe, who conducted the rest of the interview like a pro, what had happened that day.

She added to the Guardian: “Menopause took me a while to get a handle on, but I seem to be getting there.

“It’s a strange thing, I look at my daughter and think she’s about to start that journey and I’m about to end it.”

Zoe has a son and a daughter from her marriage to DJ Norman Cook: Woody, 20, and Nelly, 11.

The pair wed back in 1999 and split briefly four years later.

Aftr reconciling, it was in September 2016 they announced their separation after 18 years together.

Zoe took over the Radio 2 Breakfast Show from Chris Evans in January 2019.

She was second from the top spot when the BBC published the latest list of its highest-paid stars as part of its annual report.

The Zoe Ball Breakfast Show is on BBC Radio 2 and BBC Sounds, Monday to Friday from 6.30am.