Three teenagers fleeing police while carrying a semiautomatic gun in a backpack jumped a wall at President Donald Trump’s Mar-a-Lago resort, but probably didn’t know that’s where they were, authorities said Wednesday. Palm Beach Police spokesman Michael Ogrodnick said the 15-year-old boys were arrested shortly after they entered the grounds of the resort Friday and dumped the backpack, which contained a mini AK-47 with a loaded 14-round magazine.

He said the three are lucky that neither the president nor any family members were there, because Secret Service agents might have shot them. The club is closed for the summer.

“They had no idea where they were,” Ogrodnick said.

According to a police report, a Palm Beach officer spotted the teens sitting in a parked car early Friday morning about 2 miles north of Mar-a-Lago. When he turned on his overhead lights, the car sped south toward Mar-a-Lago.

As they approached the club, the teens spotted a second officer who was conducting an unrelated traffic stop and abruptly stopped the car, probably thinking it was a roadblock set up to catch them, Ogrodnick said.

The three bolted, jumped Mar-a-Lago’s nearby wall and hid on the resort’s grounds. Officers surrounded the club and a helicopter and police dog were used to help find them. Ogrodnick said they never tried to get inside any of the resort’s buildings.

He said the three said they didn’t own the AK-47 but had found it. 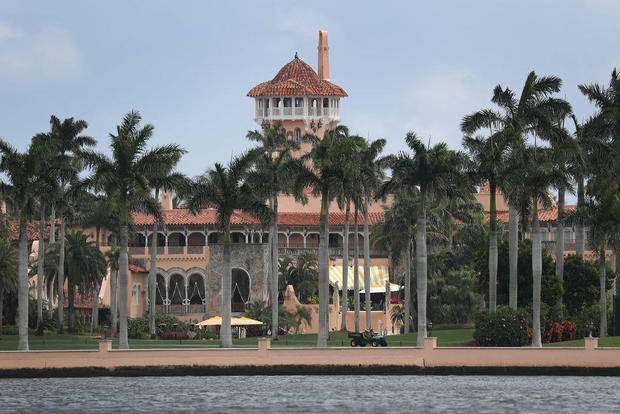 The teens are charged with trespassing with a firearm, burglary with a firearm and resisting arrest without violence. They are being held at a juvenile detention facility while prosecutors decide whether to charge them as adults.

Mar-a-Lago has been the scene of several intrusions since Trump became president in 2017.

On Jan. 31, a Connecticut opera singer fleeing police in a rented SUV crashed through a checkpoint outside of Mar-a-Lago, drawing gunfire from Secret Service agents and officers. She was not hurt. Hannah Roemhild has entered a plea of not guilty by reason of insanity.

On Jan. 5, just hours after Trump and his family had left the club following a two-week vacation, a Florida man who had been dishonorably discharged from the Marines for sex offenses was arrested after he got past two checkpoints. Authorities said Brandon M. Magnan had falsely identified himself as part of the president’s helicopter crew.

In March 2019, Chinese national Yujing Zhang gained access to Mar-a-Lago while carrying a laptop, phones and other electronic gear. That led to initial speculation that the 33-year-old businesswoman from Shanghai might be a spy, but she was never charged with espionage. Text messages she exchanged with a trip organizer indicated she was a fan of the president and wanted to meet him or his family to discuss possible deals.

Zhang was found guilty of trespassing and lying to Secret Service agents and was sentenced in November to time served.

In December, the club’s security officers confronted another Chinese national, Jing Lu, 56, for trespassing and told her to leave, but she returned to take photos. Lu was charged with loitering and resisting an officer without violence after taking photos by entering a service entrance.

On Thanksgiving weekend 2018, a University of Wisconsin student visiting the area with his parents walked into Mar-a-Lago by mingling with a group that was entering. He was arrested and pleaded guilty to a misdemeanor.