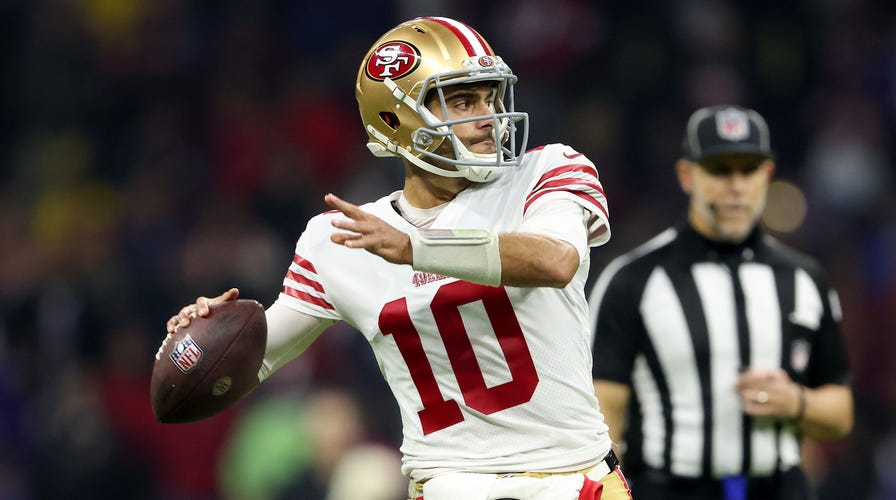 Jimmy Garoppolo threw four touchdowns down in Mexico City, as the San Francisco 49ers blew out the Arizona Cardinals, 38-10, to pick up their sixth win of the season.

With Kyler Murray sidelined again due to a hamstring injury, Colt McCoy got the start under center and both teams remained close, with the 49ers leading at halftime by a touchdown.

But, after an eight-play, 75-yard touchdown drive to start the second half, they simply ran away with this game to the point where Garoppolo and the other 49ers’ offensive weapons watched their backups finish out a big victory over an NFC West opponent. 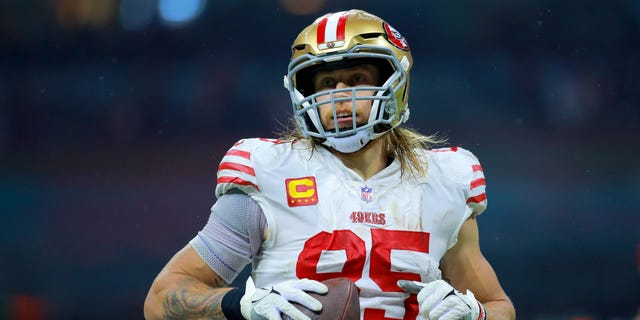 George Kittle #85 of the San Francisco 49ers scores a touchdown against the Arizona Cardinals during the second quarter at Estadio Azteca on November 21, 2022 in Mexico City, Mexico.
(Manuel Velasquez/Getty Images)

Deebo Samuel was the one that got the scoring started in the second half, using some great blocks from his teammates to go 39 yards down the left sideline to make it 24-10 for his fourth touchdown on the season.

But the following touchdowns came from two players that also found the paint in the first half: Wide receiver Brandon Aiyuk and tight end George Kittle.

Aiyuk had just two catches on the night, but they were red zone targets from Garoppolo, one for seven yards for the first Niners touchdown of the night in the second quarter followed by his 13-yard snag on a slant into the end zone in the third quarter.

Kittle ended up being San Fran’s leading receiver, though, as his 39-yard touchdown coming on a broken play for the Niners. Budda Baker was in coverage and he appeared to get a bit caught up with the helping safety in the middle of the field, which resulted in Kittle breaking free for the touchdown. He spiked the ball in the end zone and pumped up the Estado Azteca crowd.

Kittle, then, used his legs again to cap his solid receiving night, hauling in a short Garoppolo strike that he took 32 yards to make it 38-10, effectively ending any hope Arizona might have had with 10 minutes left in the fourth quarter. 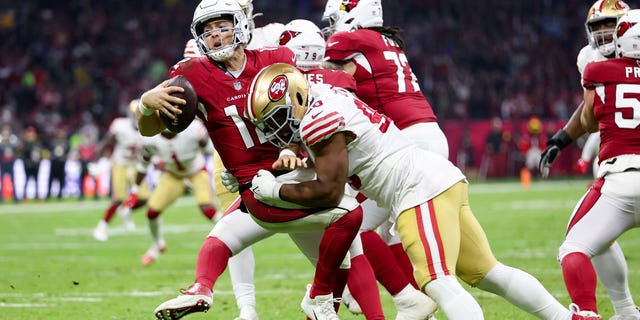 With Elijah Mitchell (9 carries, 59 yards) and Christian McCaffrey (7 carries, 39 yards) setting the tone in the run game, Garoppolo had solid pockets to finish 20 of 29 for 228 yards with his four touchdown passes on the night. McCaffrey also had seven catches for 67 yards.

Arizona was doing well to keep the San Francisco offense at bay early in this game, as they punted on their first two possessions. It allowed McCoy to go down the field for 11 plays on their second drive to kick a field goal for the first points of the contest.

And despite the Niners scoring two touchdowns in that second quarter, James Conner was able to punch in a two-yard rush to cut the lead to 14-10.

San Francisco stepped up their defensive play after that, though, and it was curtains for Arizona, who falls to 4-7 on the year. 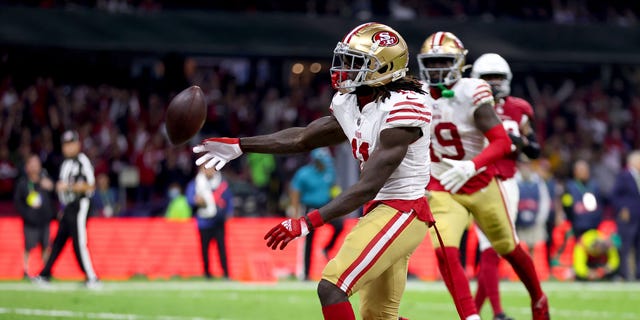 Brandon Aiyuk #11 of the San Francisco 49ers celebrates after scoring a touchdown against the Arizona Cardinals during the third quarter at Estadio Azteca on November 21, 2022 in Mexico City, Mexico.
(Sean M. Haffey/Getty Images)

Trying all he could, Kliff Kingsbury decided to go for it on fourth down on two separate drives in the second half with the mindset of giving his team a chance at keeping the game close. Instead, the Cardinals failed on both attempts, and San Fran would run it up on the scoreboard.

McCoy finished 24 of 34 for 218 yards and one interception, which 49ers corner Jimmie Ward caught on an intended pass to DeAndre Hopkins, who was able to play in this one after dealing with an injury throughout the week.

As expected, Hopkins got his fair share of targets, hauling in nine of the 12 for 91 yards. But it was Greg Dortch getting nine receptions for 103 yards to lead the Cards.

In the run game, Conner struggled to get consistent yards, going just 42 yards on 14 touches.

The 49ers, winners of three in a row now, will head back to California to get ready for a matchup with the New Orleans Saints next Sunday at home. 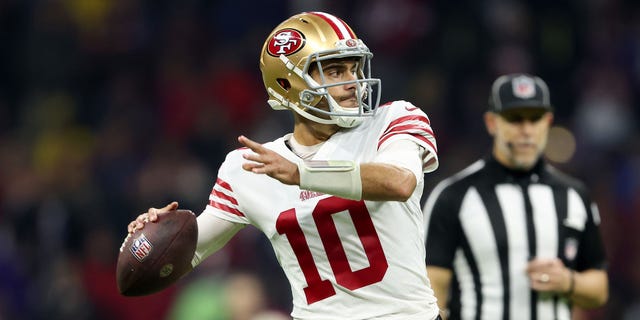 Jimmy Garoppolo #10 of the San Francisco 49ers throws a pass against the Arizona Cardinals during the second quarter at Estadio Azteca on November 21, 2022 in Mexico City, Mexico.
(Sean M. Haffey/Getty Images)

Meanwhile, the Cardinals have their backs up against the wall if they want any hope at a playoff berth with a tough Los Angeles Chargers team visiting their home in Glendale.