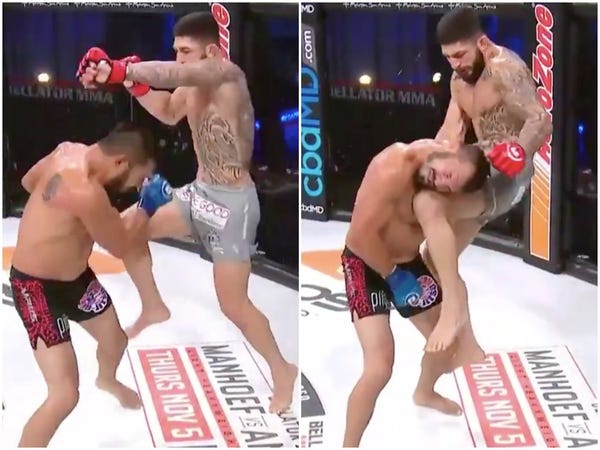 A Bellator MMA fighter named Sabah Homasi knocked out his opponent with a jumping knee, then mercilessly attacked him with ground-and-pound.

Homasi defeated Bobby Voelker 20 seconds into the second round in a middleweight match at the landmark Bellator 250 event in the Mohegan Sun Casino in Uncasville, Connecticut, on Thursday.

The 32-year-old fighter had rehearsed the knee strike in the first round, found an opening for it again early in the second, and whacked Voelker so hard with it that it appeared to send him flying.

Voelker fell to the floor and was seemingly beaten at that moment.

But Homasi pounced and hit him with three hammer fists while he was defenseless on the floor, just to ensure he had the win secured.

His fight was the fourth bout on an eight-fight card, and preceded the All Elite Wrestling competitor and former WWE star Jake Hager's blood and guts win over Brandon Calton.

Related posts:
October 30, 2020 Lifestyle Comments Off on A Bellator MMA fighter knocked out his opponent with a jumping knee, then mercilessly attacked him with ground-and-pound
Celebrity News:
Donald Trump's Niece Predicts He'll Launch 2024 Presedential Run
LeBron James Reveals His Mother Voted For the First Time Ever This Year — 'They Don’t Give a F*** About Us, Why Should I Go Out and Help Create Change?'
Prince Harry’s Godmother Lady Celia Vestey Dies ‘Suddenly But Peacefully’ at 71
The Truth About Michael Strahan & Kelly Ripa’s Difficult Relationship
HBO’s ‘Baby God’ reveals how celebrated doctor secretly impregnated ‘dozens’ of women: 'It was surreal'
Recent Posts
This website uses cookies to improve your user experience and to provide you with advertisements that are relevant to your interests. By continuing to browse the site you are agreeing to our use of cookies.Ok