A self-portrait by artist Meyne Wyatt has made art history after being awarded the Packing Room Prize in this year's pandemic-delayed Archibald Prize. 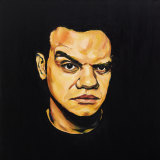 Meyne Wyatt has won the Archibald Packing Room Prize with his self-portrait.

It's the first time an Indigenous artist has won any of the prizes on offer in the Archibald Prize in its 99-year history.

"I'm surprised to be here," the artist, writer and actor said. "It was just a COVID project first."

Head packer Brett Cuthbertson awarded the $1500 prize to the Western Australian-born, Sydney-based artist in an event that was live-streamed to the public for the first time in order to comply with health regulations.

"I have been known to say that artists who enter a self-portrait have no hope of winning the Packer Room Prize. but in this case I made an exception to my rule as Meyne is both an artist and celebrity all over Australian television."

Overall it was a record year for entries with 2565 submitted to the Archibald (portrait), Wynne (landscape or figurative sculpture), and Sulman (genre, subject or mural) prizes, 10 per cent more than in 2021.

Wyatt's was among 12 self-portraits included in the 55 Archibald finalists. 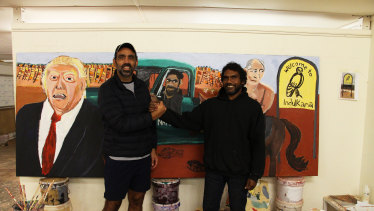 Adam Goodes and Vincent Namatjira when Goodes visited Indulkana in 2018.

The three – four-time finalist Vincent Namatjira and first-timers Kaylene Whiskey and Tiger Yaltangki – all work out of Iwantja Arts in the tiny community of Indulkana in far north west South Australia.

Namatjira, who last year was awarded an OAM, was motivated to paint Goodes after seeing last year's documentaries detailing his lifelong fight against racism. 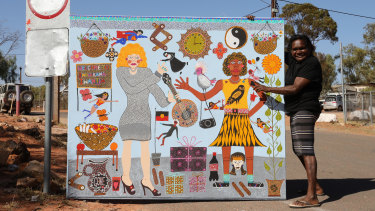 "Watching those films stirred up some pretty rough feelings, and memories of my own experiences," said Namatjira. "It turns out that Adam and I have a fair bit in common and we both know the pressures that come with being an Aboriginal man in this country. We've both got young daughters, and want them to have bright futures ahead of them, with nothing holding them back.

"Goodesy is one of our living legends, so I hope I did him justice on the canvas."

Namatjira said he was thrilled to be selected a fourth time and particularly excited to be joined by his colleagues, Whiskey and Yaltangki.

"We support each other here at Iwantja Arts, we're proud of each other's achievements," he said. "I did tell them though, that they have to get short-listed a few more times before they catch up to me!" 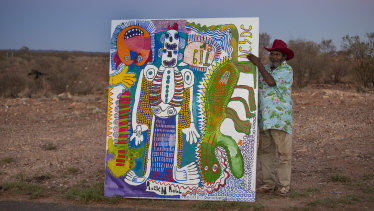 Tiger Yaltangki and his self portrait which has been shortlisted.

Alongside the Archibald successes, Peter Mungkuri, Alec Baker and Betty Muffler from Iwantja have been shortlisted for the Wynne Prize.

"It's a massive result for our art centre," said Namatjira.

Artists had three extra months to work on their entries after the Art Gallery of NSW opted to delay the exhibition until after the health crisis when, they said, art would be needed more than ever.

First awarded in 1921 after the receipt of a bequest from the late J. F. Archibald, the editor of The Bulletin, the prize celebrates its 100th birthday next year.

The Archibald carries prize money of $100,000 for the winning artist with entries to be painted in the past year, from at least one live sitting with their subject, a condition artists were expected to adhere to even with lockdown.

The Packing Room Prize is selected by gallery staff who receive, unpack and hang entries with Cuthbertson commanding 52 per cent of the vote.