‘These really are unprecedented times!’ Anna Wintour sparks a frenzy on Instagram AGAIN after being pictured running in a sweatsuit and Colin Kaepernick AF1 sneakers

Anna Wintour has stunned Instagram users yet again after she was pictured heading out for a morning run while wearing a full sweatsuit and Colin Kaepernick-designed Nike sneakers.

The image of the 70-year-old Vogue editor-in-chief was shared on the magazine’s Instagram account on Monday morning, sparking another wave of shocked comments from followers expressing their surprise at Anna’s casual attire.

‘Anna Wintour… is wearing… athleisure?? These really are unprecedented times,’ one person commented on the photo – which comes less than two weeks after the magazine legend first sparked a social media frenzy when she was pictured working from home in a pair of sweatpants. 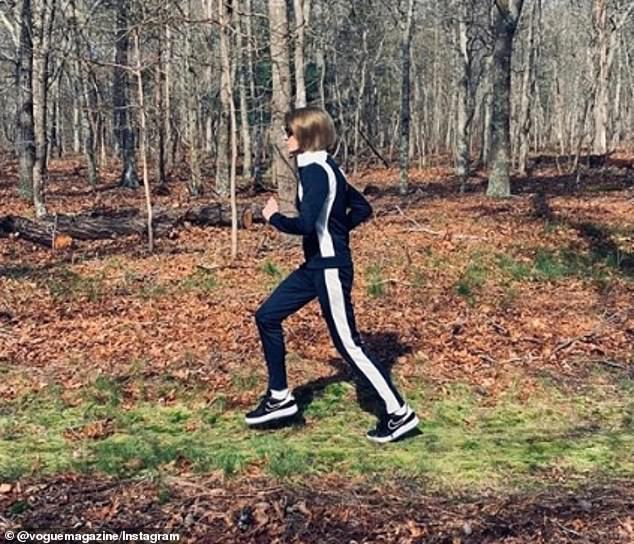 Shock: Anna Wintour has sparked a frenzy of excitement on Instagram yet again by sharing an image of herself wearing sweatpants – after famously saying she never would 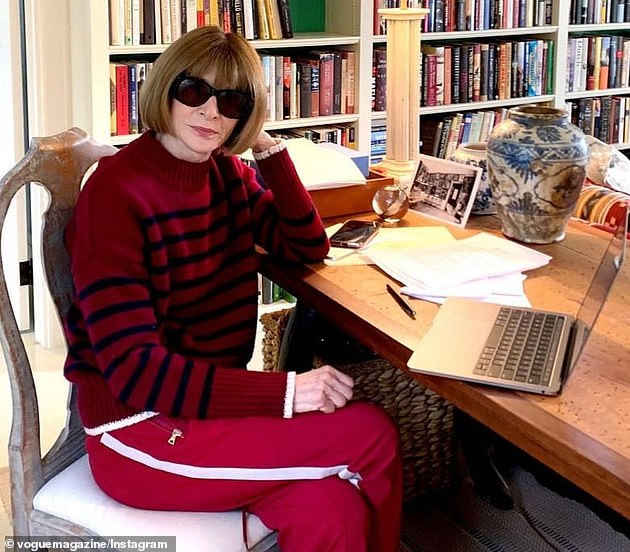 Shock: Earlier this month, Instagram users went wild when this image of the 70-year-old Vogue editor-in-chief was shared on the magazine’s account – showing her in a pair of red joggers

Despite once saying that she would never wear the casual closet staple, Anna appears to have changed her mind since she began self-isolating at her Hamptons home, where she has embraced a much more low-key look than many are used to seeing her model.

But Anna’s sweatpants and matching tracksuit jacket were not the only aspect of this latest photo that caused a flurry of excited comments. 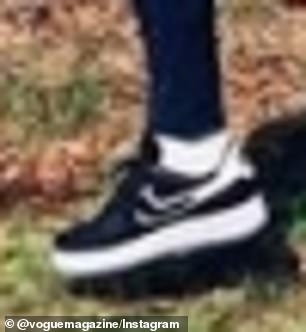 The fashion favorite’s footwear was also the subject of many questions from eagle-eyed Instagram users who noticed that she chose a pair of Nike Air Force 1 sneakers designed by NFL star Colin.

‘Is she… running in Kaepernick AF1s? What tha…?’ one person questioned, while another chimed in: ‘Is she wearing Nike’s Kaepernick’s to run?’

Many praised her for the photo – and her choice of footwear, with one user writing: ‘In AF1s!! – Anna, you are nails!’

The $110 black leather shoes were released on December 23 and promptly sold out within a matter of hours, with Colin’s fans racing to lay their hands on a pair of the hotly-anticipated sneakers.

But the trendy, and oh-so casual, feel of the footwear is not the only reason why Instagram users were so quick to point out Anna’s very poignant choice of shoe.

Former 49ers star Colin’s footwear design also features ’08 14 16′ on the sole of the right sneaker – the date of the first time he refused to stand during the National Anthem at the start of an NFL game in protest against police brutality and racial inequality. 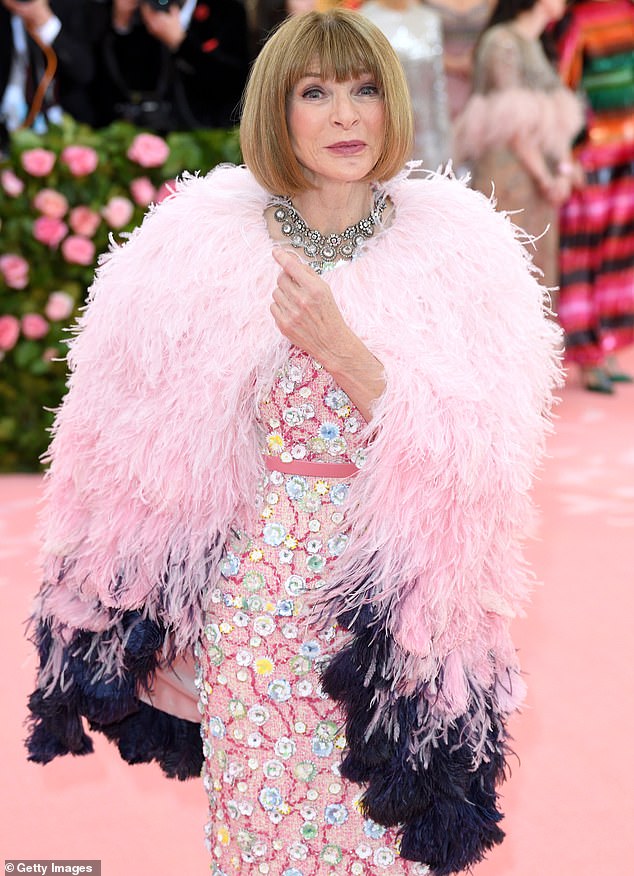 Opening up: Anna, pictured at the Met Gala in 2019, is normally seen wearing a much more elegant wardrobe 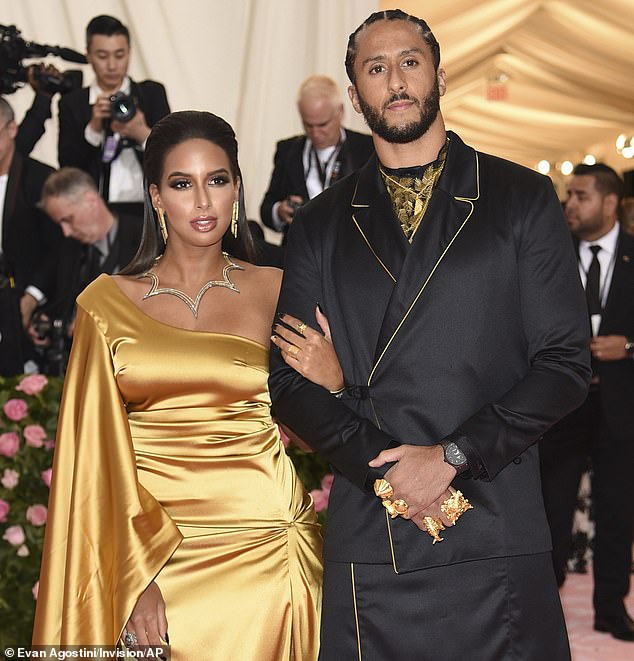 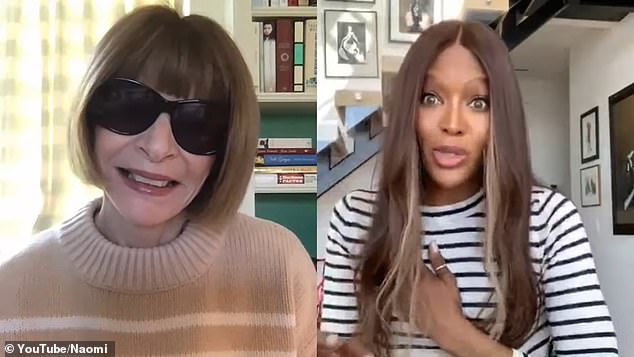 ‘Release’: Anna revealed that she has taken up running while in quarantine during an interview with supermodel Naomi Campbell last week

On that date, Colin sat on the bench as the National Anthem was played during the pre-season match-up against the Houston Texans, and from then on, he chose to take a knee at the start of every game.

The polarizing protest sparked a wave of controversy, with some praising the football star for taking such a bold stand, while others – including President Donald Trump – slammed his actions, and called for him to be dropped from the team.

Meanwhile Anna showed her support for Colin and his protest by inviting him to attend last year’s Met Gala, a sentiment that she has now clearly echoed by choosing to wear his sneaker design.

Throughout the pandemic, the usually-private Anna has offered many a glimpse into her personal life, sharing snippets of her lockdown routine, while sheltering in place at her Hamptons home with her family.

Last week, she revealed that she had taken up running in an attempt to find a way to release all of her stress and tension.

Anna opened up about her new lockdown hobby during a live YouTube interview with supermodel Naomi Campbell on Wednesday afternoon, revealing to the fashion star that she is now running for an hour a day.

‘I’ve taken up running,’ she shared during her No Filter With Naomi appearance, adding that her son Charlie Shaffer’s wife Lizzy urged her to take it up.

‘My daughter-in-law is a runner and she told me, “Well you just should run as much as your body lets you,”‘ she added.

But Anna admitted that her new hobby hasn’t been the easiest one to embrace, joking that her ‘body keeps telling her to stop rather than run’. 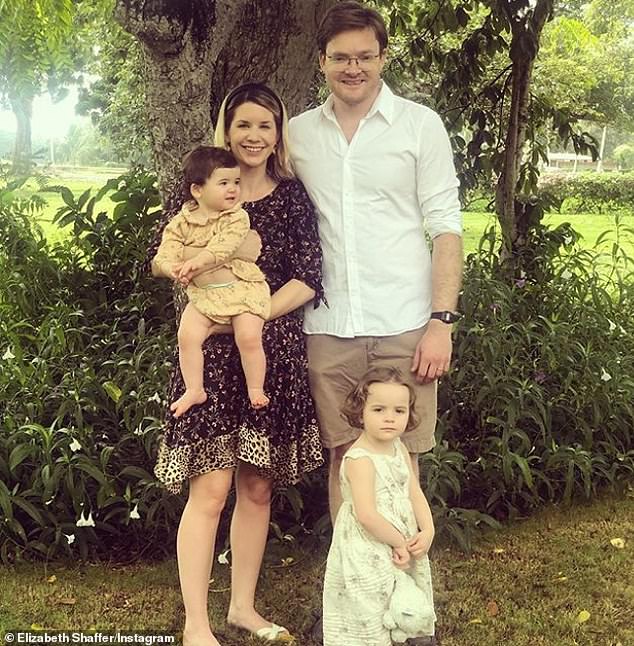 Inspiration: Anna’s daughter-in-law Lizzy Shaffer, who is married to the editor’s son Charlie, is the person who urged her to take up running 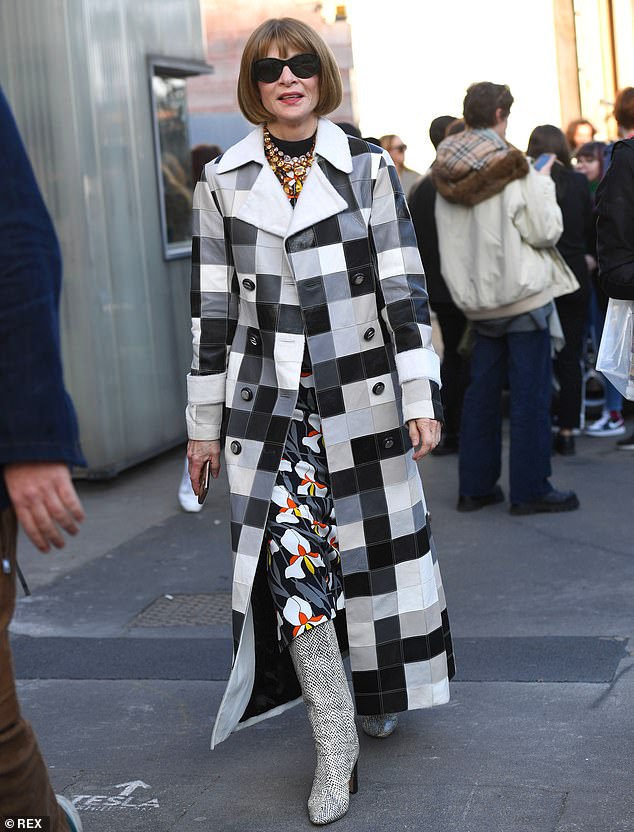 Changing it up: The magazine legend usually sticks to a strict fashion formula that includes a floral patterned dress, chunky gem necklaces, and her signature sunglasses

‘I’m working on it,’ she added. ‘I am [enjoying running]. I’m very lucky in that I’m able to run inside. My heart really goes out to people that are stuck in small apartments and confined spaces.

‘I feel lucky that I can just run for the hour. It’s a great release for me.’

The fashion legend and long-time tennis fan admitted that she plans to turn her attention to the tennis courts when it gets warmer, but for now she is content to keep hitting the treadmill as often as she can.

Anna is currently quarantining in her Hamptons house with ‘different members of her family’, and opened up to Naomi about how her life has changed – and the struggles that she is having with work.

‘I’m at my house in the country with different members of my family and it’s certainly a different way of conducting your life,’ she shared.

‘I’m on Zoom day in, day out, and I think the most difficult thing is that time kind of merges… hours merge into hours and you don’t really have a sense of accomplishment the way you do in a more traditional work day.

‘I’m constantly in touch with my colleagues, the good news is they’re all safe and healthy… [but] we all miss human connection.’

Anna’s revelation about her new workout regime comes just days after she caused a frenzy online when she posed for a photo in sweatpants, after famously insisting that she would never wear them. 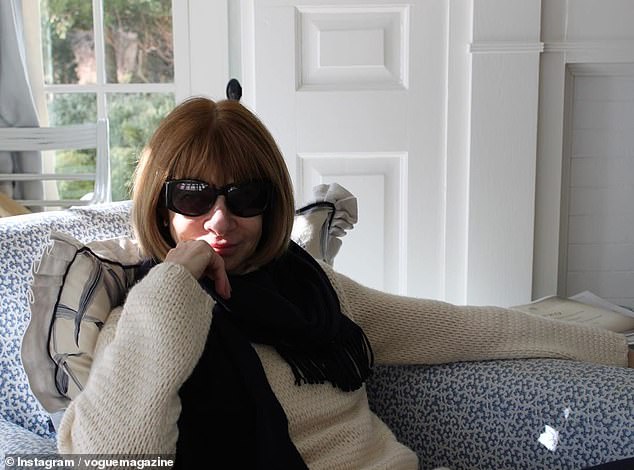 Comfortable: The Vogue editor-in-chief is currently in lockdown at her home in the Hamptons with several members of her family, and she has been trying to run every day 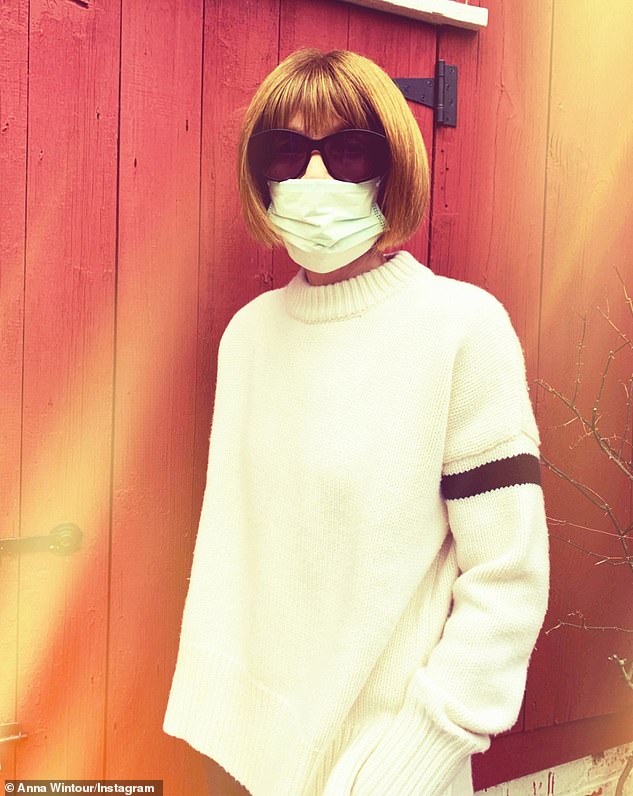 Protect yourself: While speaking to Naomi, Anna urged everyone to wear masks whenever they go outside in an attempt to stop the spread of COVID-19

As you might expect, Anna put her own very stylish spin on the loungewear trend when she posed for the photo for Vogue’s Instagram account on April 13, teaming the red bottoms with a striped jumper as she sat at her chic desk to work from home.

And while there are bigger things going on in the world at the moment, her fans playfully noted that seeing this fashion stalwart in sweatpants did seem out of sorts.

‘I never imagined I would see Anna Wintour wearing sweatpants,’ one person commented on the image, while another incredulous commenter added: ‘ARE THOSE SWEATPANTS?!!!!’

While wearing sweatpants might not ordinarily seem like a subject that would cause so much interest online, Anna’s ensemble appears to represent something of a U-turn as far as her own personal style rules are concerned.

Just last year, the magazine editrix was asked whether or not she ever wears sweatpants, to which she responded, ‘No,’ in an incredibly unimpressed turn.

The style move was also surprising because Anna is renowned for wearing the same fashion formula day in day out, no matter what the weather or the occasion.

Since 1994, Anna has worn the same style of nude Manolo Blahnik pumps, which were designed especially for her by the footwear legend.

Although she will occasionally switch these out for a more sensible boot during the colder months, the rest of her ensemble remains the same: a floral-print dress, a stack of  colorful gem collar necklaces, and her signature sunglasses.

However, spending days quarantined at her home appears to have pushed Anna towards a more comfortable collection of clothing – although she has not ever been without her sunglasses, even while self-isolating at home.