A global pandemic, it turns out, is fertile ground for DIY dance-floor ingenuity. 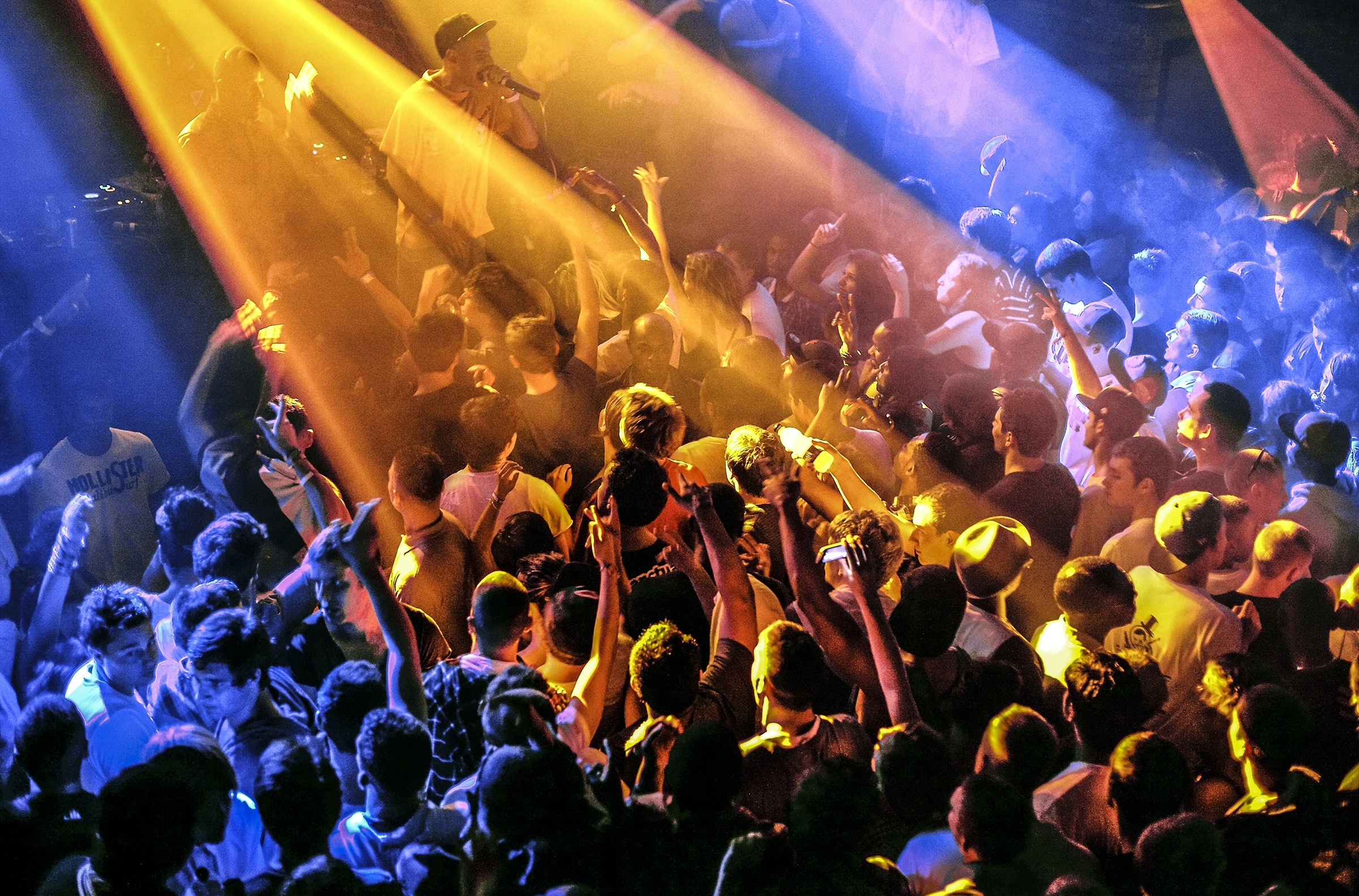 In March 2020, the nightlife producer and DJ Frankie Sharp was about to sign a lease for a four-story building in Hell’s Kitchen in Manhattan, which he planned to turn into a gay club called the Q. Five days later, the city was in lockdown. “So not only were my lifelong dreams of opening my own club crushed, but everyone I knew was jobless, hopeless, and scared,” Sharp said. “I thought our industry, which relied on the closeness of thousands of people in one room, was over.”

Like many in the throes of a traumatic year, Sharp started doing whatever he could “to locate some peace.” He retreated to a cabin in the woods with his partner and his dog, began taking online sword-fighting classes, and binged on feel-good television shows—hobbies alien to someone accustomed to after-dark shenanigans with “go-go boys in jockstraps and drag queens doing dips and backflips,” as he put it. Pictures of his home-baked banana bread on Instagram, he joked, were why he “lost a couple thousand followers this year, for sure.”

A view of the Panorama Bar, on the second floor of Berghain, Berlin, 2007.

Stuck indoors and looking for some catharsis, he began blasting—“Loudly,” he emphasized—the type of four-to-the-floor, chest-pounding music that would have soundtracked one of his all-night DJ sets in the “before” times at venues like the Westway and Lovegun. He was drawn to “Say So,” by Doja Cat (“The way she plays around with unexpected rhythms gives me hope!”); “My Future,” by Billie Eilish (“The lyrics became my pandemic anthem”); and the entirety of Deee-Lite’s seminal 1994 album, Dewdrops in the -Garden. Futuristic disco sounds, he explained, “seemed fitting when you felt lost in the present.”

The plug might have been pulled on nightclub speakers across the globe, but the music never died—at least not on AirPods and home sound systems. Barren dance floors could not stop a wild rush of clubland innovation and musical subgenres—from pisadinha in Brazil to dangdut in Indonesia—on platforms like Spotify and TikTok. “Initially, we thought dance music—a genre you might typically associate with being outside, at a party, or in large crowds—would take a nosedive in terms of consumption under quarantine,” said Phiona Okuma, who is the head of music for Spotify’s division in sub-Saharan Africa. “But it never actually slowed down. In fact, the opposite happened.”

A global pandemic, it turns out, is fertile ground for DIY dance-floor ingenuity. When Germany shuttered nightlife, Berghain, the incomparable techno institution that is not for the faint of heart—remember the good old days of sex rooms, naked club kids, and three-day narcotized raves?—partnered with the Boros Foundation, which oversees one of the city’s most highly regarded private art collections, to transform the 1,500-person-capacity dormant power plant turned club into a massive exhibition hall showcasing 117 artists. Elevated platforms, once stages for wriggling -bodies soaked in sweat (and other fluids), became plinths for photographic sculptures by the French-born artist Jimmy Robert; the club’s world-famous Funktion-One speakers were adorned with an inflatable plastic bubble by the artist Puppies Puppies. Slowly but surely, though, things are inching back to some semblance of normalcy. The London nightclub Fabric has announced it will be hosting its grand reopening weekend on June 25. “As the world unlocks from the Covid restrictions we are looking forward to welcoming artists and clubbers back,” read the club’s Twitter feed. The bingefest kicks off at 10 p.m. on Friday and goes until Monday morning.

With club doors closed, out-of-work DJs and prolific techno heads have been booked and busy, producing bootlegs and hybridized tweaks on SoundCloud as rapidly as the coronavirus has been mutating. A frenetic interpretation of house known as slap house exploded on TikTok, on the back of one of the year’s most massive international hits, Imanbek’s remix of “Roses,” by Saint Jhn. Chopped-and-screwed versions of the song, which received over 4.5 billion plays in the month of April 2020 alone, soon splintered off into an aggressive rock-house crossbreed called prock house. The term was coined by the German production duo Vize, largely considered to be slap house pioneers, whose latest single is titled, appropriately enough, “End of Slaphouse.”

Travel restrictions do not apply to dance’s new wave, either. Nickzzy, El Patron 970, the self-proclaimed “El Papa Del Drill,” and other hip-hop acts from Spain have reimagined U.K. drill, a variant of trap known for its mix of bouncy legwork and nihilistic attitude, through lyrics and music videos that reflect the lived experiences of Moroccan immigrants and other first-generation Spaniards. And fittingly for a year that has felt at times like the zombie apocalypse, some bygone trends have even risen from the dead. In Russia, Generation Z audiophiles revived hardbass, a style of fast-tempo techno that originated in the rowdy, mosh-heavy rave scenes of Eastern Europe in the 1990s. Hardbass’s surge in popularity has been so great that the Slovak EDM producer DJ Blyatman finally released an alcohol-fueled music video for his anthem “Gopnik” (a slang term for suburban Slavic youths akin to British “lads”), almost four years after its initial release, in 2017. In a description posted to his YouTube channel, where the video now has over 2 million views, he wrote: “Bitch, it’s time to drink vodka no limit, ride Lada or Russian party in Kamaz and dance to hardbass!” Wearing a mask, it would seem, is optional.

“I think a lot of the music now is a reaction to finally being able to go out again, and not having been able to have that kind of communal experience on the dance floor,” said Connie Fleming, the legendary New York City doorwoman. As a gatekeeper for raucous club nights thrown by the events empress Ladyfag and the Standard hotel, she understands what it’s like to miss out on the near primal emotions of a transcendent night out. “It’s said that the bass lines of disco and techno are based on the rhythmic patterns of a heartbeat—you know, babies fall asleep on their mother’s chest because they’re comforted by their mother’s heartbeat,” Fleming said. In a period marked by an overwhelming loss of life, as well as the adoption of safety measures designed to keep us apart, “there is almost something tribal between a disco beat and a heartbeat. It’s part of humanity.”

The connection between dance music and large-scale public crises extends back to the Roaring Twenties, a period of prosperity and debauchery following the deadly Spanish flu pandemic of 1918 and World War I. It was a time of young flapper girls experiencing the commixed pleasures of automobiles, cheap booze, and shortened skirts; underground drag balls, which would later give rise to the “Pansy Craze,” as the resurgence of gay nightlife in the late 1920s and early 1930s was known; hot spots like the Cotton Club in Harlem, where Duke Ellington was bandleader, which hosted music and dancing until the early morning hours; and other culture-defining nightlife venues, where many of the towering Black jazz greats of the ’20s and ’30s put on a show. The word “party” is said to have first been used as a verb by the American poet E.E. Cummings, in a 1922 letter detailing how he had “partied” in Paris.

A scene from Circus, a roving warehouse party in London, 1985.

Around half a century later, the early days of the AIDS epidemic radicalized dance music into a sociopolitical movement. With queer dance-pop anthems like “Relax,” by Frankie Goes to Hollywood, and “Smalltown Boy,” by Bronski Beat, on repeat, nightclubs in San Francisco, London, and New York became makeshift health-crisis response units for gay men, drug addicts, and transgender individuals ignored by a homophobic and racist medical establishment. Fleming, then often known as Connie Girl, was a pioneering transgender model and It Girl habitué of downtown New York clubs like Paradise Garage and Palladium. “It was about communities connecting as communities,” she said. “Before the Internet, dance clubs were where we met up and exchanged information. They were a place where ideas came to fruition.”

Dance culture in the age of Covid-19 represents “escapism and optimism, all at the same time,” said Okuma. In her view, the contemporary sounds of amapiano, a breezy blend of jazz instrumentation and house music rhythms from South Africa, are reminiscent of kwaito, an African spin on the type of house records that American DJs such as Mr. Fingers and other Chicago house pioneers would play. Kwaito emerged in townships during the ’90s, when underground raves in Johannesburg bridged queer and Black subcultures and shaped youth resistance to South Africa’s brutal white nationalist regime. “Dance music has long been associated with positivity and hopefulness during times of struggle,” she said.

When and how tomorrow’s dance floors will be packed again is anyone’s guess. The music, to be sure, is already there. If vaccines and the end of social distancing bring about a Roaring Twenties–esque era of hedonism, Sharp and his army of flapper girls and boys are ready: The Q is slated to open its doors as soon as health officials give the green light. “The fact that our common enemy tried to take us all out and was unsuccessful—that is something to celebrate,” he said. “And this postwar celebration will be one of epic proportions.”

Related posts:
June 23, 2021 Lifestyle Comments Off on Are We Entering a New Golden Age of Nightlife?
Celebrity News:
What Is Offset's Real Name?
How Did Courteney Cox Meet Boyfriend Johnny McDaid? What Is Their Age Difference?
It Was Love at First Sight When Track Athletes Tara Davis and Hunter Woodhall Met at Age 16
Scooter Braun Officially Files For Divorce From Yael Cohen – & Already Has A Prenup In Place!
OMG! Prince William Is Also Writing a Book After Harry's Memoir News
Recent Posts