As COVID-19 swept through Europe in the winter of 2020, it was noted, with plenty of irony, that one of the pandemic’s first casualties could be the air kiss.

After all, it was midway through Fashion Month, the biannual circuit of shows through New York, London, Milan and Paris, that things started to get real. Industry masthead Women’s Wear Daily even ran an article under the headline “At Paris Fashion Week, air kissing is out, hand sanitiser is in”. 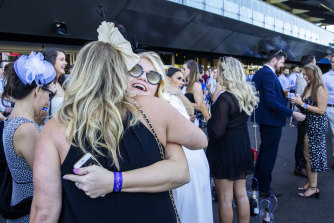 Hugs back on track … Racegoers at Randwick last month.Credit:Getty

As the fashion industry bade bye-bye to bises, the rest of the world soon found itself in a world of elbow bumps, foot taps and faux hugs – from a suitable range – that made most interactions, even with our nearset and dearest, seem like a drunken game of charades.

It wasn’t long before the government intervened. In March, Prime Minister Scott Morrison declared war on handshakes. In May, America’s top infectious diseases expert, Dr Anthony Fauci, went so far as declaring we should never shake hands again. Ever. And as late as December, Victorian Premier Dan Andrews was sticking by his government’s tough “no hugs, no handshakes” stance.

And yet, as 2021 has dawned and Victoria in particular continues a record run of zero community transmission, something has shifted. People are hugging and kissing again like it’s 2019 (except on Masterchef, where excessive elbow bumping in the early episodes of season 2021 feels just as wrong). 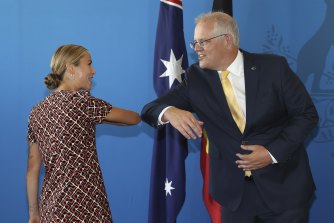 Australian of the Year Grace Tame and Prime Minister Scott Morrison share an elbow bump in Canberra in January.Credit:Alex Ellinghausen

When I could not attend a work event this week and asked a contact for a debrief, her key points did not concern the speeches or the food but the sheer amount of kissing between guests, which made her uncomfortable.

“People I consider friends I could say ‘no’ to but peers and colleagues reached out … as if COVID never existed. If I reject them, I’m rude, maybe neurotic. I want to retain my personal space in a post-COVID world. Can you advise?”

Speaking to colleagues and peers, it seems my friend’s experience is hardly an isolated one.

At a Melbourne cafe on Wednesday, I observed a woman ask permission to shake hands as she greeted her clients. A friend told me how much she had missed hugging people and was grateful the practice had returned. And a senior colleague recounted how at a work event “everyone shook hands”.

If 2020 was in part defined by certain catchphrases – “iso”, “doomscrolling” and “cottagecore” – then socialising in 2021 can so far be summed up with one question: “Are we hugging/kissing/handshaking?”

The current lack of COVID-19 in the community means the risk of transmission is extremely low but avoiding unnecessary contact is about maintaining good hygiene and infection control habits more broadly, says Deakin University’s chair of epidemiology, Professor Catherine Bennett.

She says the progressive increase in touching is interesting.

“People who are natural ‘contact’ people tend to be the ones who reverted quickly [because it’s] … important to them,” she says. “We know physical contact is important from a health perspective.”

Remember how good those “illegal” hugs with a parent or friend felt during lockdown? No? Well, you may be in the other camp, the one probably relishing the licence to avoid touching. 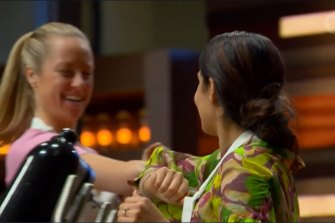 Bennett says what’s most important is that we all avoid touching at the first sign of any illness. She says society has benefited from greater infection awareness generally, including staying home from work or away from friends if people are sick or recovering from illness.

“It’s about finding the happy medium, being able to connect with people but having that extra sense of responsibility,” she says.

So where do our top health experts sit on the question of hugging and handshakes? Bennett says personally she favours air kisses and hugs but admits to being caught out by the occasional over-eager handshaker. “But I pleasantly keep it brief and trust in my hand-sanitation regimen,” she adds.

Associate Professor Philip Russo, president of the Australasian College for Infection Prevention and Control, is also fine with a handshake or hug from someone he knows but stresses good practice is not about whether you make contact with someone but “what you do next”. He says after touching, thoroughly clean hands before putting them near your face or picking up food.

“Right now in the community, [touching] is not a [COVID-19] risk but if we had community spread we would need to reinforce those messages,” he says.

As we enter winter and flu season, experts agree that keeping up no-touching rules can prevent many kinds of infections that thrive in cold weather, such as colds and flu.

“A lot of people didn’t get colds last year and it will feel a lot worse this year if you get it, likewise the flu,” says Bennett. “We’re more vulnerable, we have less of that partial immunity.”

So when it comes to refusing a handshake or hug, is there a way to do it so you don’t appear rude or cause offence to the initiator?

Amanda King, founder and director of the Australian Finishing School, says if you must reject an advance, do so with respect either by stepping back slightly and smiling, or placing one’s hand on one’s chest during the greeting. Gently saying “Thank you but I am not kissing/hugging right now” is more direct but still polite.

King says the easiest way to avoid awkward situations is to focus on creating intimacy through smiling and eye contact. And never feel forced into a physical interaction.

“It’s nice to ask permission but everyone feels obliged to say yes, even when they don’t want to,” she says. “We shouldn’t be [hugging or kissing] for a little bit longer.”

She says one positive from the pandemic may be that people reset their own gauge of where hugs and kisses are appropriate in social and professional settings.

“We don’t need to hug everyone as though we are family members,” she says. “Some people hug very differently from others – it’s a very messy area.”

Get a little more outta life

Start your week with practical tips and expert advice to help you make the most of your personal health, relationships, fitness and nutrition. Sign up to our Live Well newsletter sent every Monday.

Most Viewed in Lifestyle