Growing up undocumented in the United States, Areli Morales didn’t come across many children’s books that addressed or helped make sense of her experience. So she wrote her own.

“Areli Is a Dreamer: A True Story,” illustrated by Luisa Uribe (Random House Studio, out June 8), depicts the author’s early childhood in Puebla, Mexico, where she was born, and in New York City, where she grew up.

Morales, a Deferred Action for Childhood Arrivals (DACA) recipient – a program put in place by former president Barack Obama – shares her story to equip young readers with the necessary language to unpack and understand what people like her have gone through and to help readers going through a similar experience feel seen.

Her book follows a young Areli navigating a move from a Mexican mountainside to a bustling city. Everything in the U.S. feels different to Areli and she longs for the days at her abuela’s house. But with time, she sees it as a place filled with opportunity, a place to forge her own path.

Kids and parents plead for diversity in children’s books. 8 great titles that deliver.

Still, Morales says it’s important to tackle these issues with children. “When I was 6, I was a child, you know, I was going to school, and I wish I had a book like this that I could connect with, that I could see myself in,” she says. “So I thought it was really important to have a picture book that was going to address a younger audience.”

A graduate of CUNY-Brooklyn College, Morales has a degree in childhood bilingual education and works as a substitute teacher. But she never thought about writing a children’s book: “I think it was pure luck.”

She adds that her debut picture book was written with teachers in mind to “start these conversations in their classrooms and make sure their students are aware that we are all dealing with all sorts of things and that we need to be empathetic and kind to one another.” 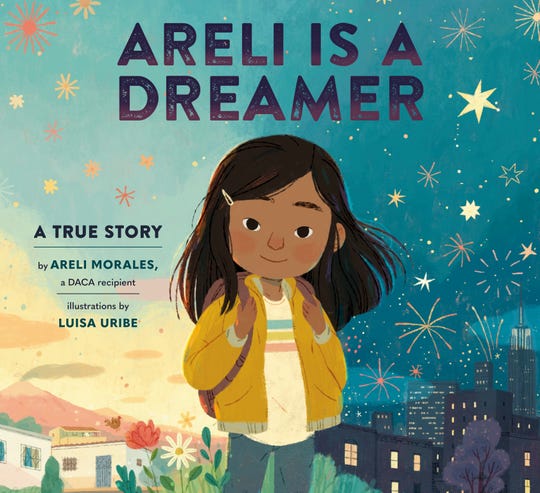 Morales recalls – and writes in her book about – a time when a classmate called her an “illegal alien,” causing her to become “very afraid to talk about where I came from and afraid to share about my life in Mexico.” It took time for Morales to feel comfortable enough to talk about her immigration status because of the stigma, she says.

“So it’s important to address that in our classrooms,” Morales explains. “We need to start these conversations at a young age because children might be dealing with this, they might have family members who are undocumented, who might find themselves in situations like that.”

As an educator and DACA recipient, it’s important to Morales for teachers and parents to introduce young readers to these types of stories and characters because they “exist in real life, they exist in our classrooms.”

50 Black YA authors you should read, from Angie Thomas to Walter Dean Myers

These six children’s books shed light on a diversity of experiences from different parts of the world – including Mexico, Puerto Rico and Egypt – that young readers may be living through. The authors spoke to USA TODAY on the importance of writing about different cultures and upbringings, and what it would have meant to them growing up reading these books. 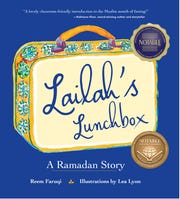 Faruqi used to read a lot of picture books to her second-grade students and “always loved working with kids.” That’s why she chose to write a picture book, and also “why I wrote about Ramadan in ‘Lailah’s Lunchbox,’ because when I was in school, in America, I remember it always being hard to explain to classmates why I wasn’t eating or why I didn’t have my lunchbox with me.”

Faruqi wrote her book in order to help kids, who may be in the position she was once in, make sense of these cultural differences when moving to a new place. “As a Muslim kid going to school, it’s hard when you feel like you’re the only one,” she says, adding that as a Muslim immigrant, she didn’t “really see myself in books.”

“The more we speak about it, the more we normalize it,” Faruqi says. “Kids can handle stuff, a lot more than we think they can. And a lot of times they’re living it. So I think knowing that a classmate has moved from a different continent, and knowing what the experience might be might make it a little easier for them to make friends with them.” 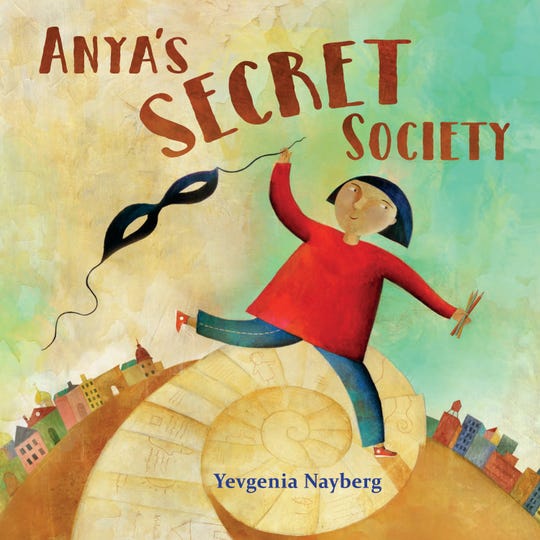 Nayberg shares some similarities with the main character of the book she also illustrated: The two are left-handed. “I mostly use that as a metaphor for growing up as an Ashkenazi Jew in the Soviet Union because that was something that really set you apart, much more than being left-handed.”

Her book takes place in Russia and follows Anya as the cultural expectation of being right-handed in that country stifles her creativity and artistic spirit. To cope, Anya imagines a secret society of famous left-handed artists with whom she can be herself. But once her family emigrates from Russia to America, she realizes she’s not that different after all.

Nayberg, who immigrated to the U.S. as an adult, believes people should speak to children about these issues without being “condescending.”

“People need to know where people come from, they are absolutely capable of learning (this),” she says. “Adults should promote curiosity in children more than anything else… Curiosity ultimately results in tolerance.”

Required Reading: What kids should be reading for AAPI Heritage Month and why representation matters 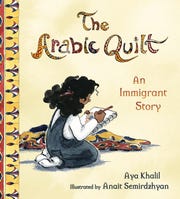 Khalil’s family, like her character Kanzi in “The Arabic Quilt,” immigrated to the U.S. from Egypt with her parents and older brother when she was 1. Inspired by her own experience of the time her mother visited her at school and helped her classmates write their names in Arabic, the book follows Kanzi on her first day in a new school. She wants nothing more than to fit in but is teased by her classmates after her mother drops off her lunch and calls her “Habibti” (which means “love” in Arabic).

Khalil says she doesn’t remember reading a book featuring a Muslim or Arabic character until she was in high school: “It was just not there, I just felt like my identity, my culture and my religion were not out there for the world to read.” The author recalls only seeing “negative images” of her community and culture growing up and wanted to “see more books about immigrants and books about refugees.”

The mother of three wrote this book for her children: “I want to normalize these types of books. I wanted them to see themselves in the story.”

The best books of 2021 so far: What USA TODAY’s critics loved reading

“Coquí in the City,” by Nomar Perez (Dial Books)

Based on Perez’s own childhood, “Coquí in the City” is about a boy named Miguel who moves from Puerto Rico to New York City and realizes his new home has more in common with San Juan than he thought. The author-illustrator’s picture bookexplores complex themes of belonging: “(Moving to the U.S.) was something new for us even though we’re so closely tied with the U.S.”

Perez adds that, for him, moving to the U.S. meant getting accustomed to different foods, different seasons – compared to his sunny Puerto Rico – and speaking more English. “Those are the things I wanted to show with a book. I wanted to show kids that it is something hard at first to move to a new place but at the same time, I was able to learn about different cultures,” he says.

Perez wants young readers to understand that moving to a new place doesn’t mean leaving your culture behind. “Miguel finds that there are little bits of Puerto Rico in the U.S.” he adds. “And that you can bring Puerto Rico in your heart.”

“Together We March: 25 Protest Movements That Marched into History,” by Leah Henderson, illustrated by Tyler Feder (Atheneum Books for Young Readers) 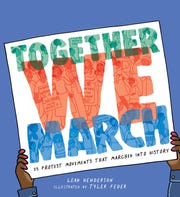 "Together We March: 25 Protest Movements That Marched into History" by Leah Henderson, illustrated by Tyler Feder (Photo: Simon & Schuster)

Henderson highlights 25 groundbreaking protest movements including marches that deal with race, free speech, LGBTQ rights, women’s rights, religious freedom and immigration. Henderson’s hope for was to lay the foundation for young readers to see what their peers have done in the past to show up for marginalized communities and to “see that are like minds out there their age and that they can come together.”

Henderson says, “I come from a family that has always told us to speak your mind and speak your heart and to try, you know, just put one foot in front of the other and try.”

She continues, “And so, the different marches that you see throughout, especially the one that’s with the Dreamers, you know, it was only a handful of kids that collectively decided together that they were going to march for a larger community that is often kept out of the conversation.”

Celebrate with pride: Visit these sites where LGBTQ history was made

Against the odds, many indie bookstores managed to weather the pandemic storm 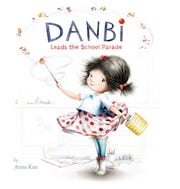 Author and illustrator Kim believes “books about immigration in the U.S. have to be a little more positive.”

“Immigrant kids need role models, too,” she says. “I felt strongly about creating a character who was very heroic and strong. She has her down moments but she has that heroic strength, where she can pull through and it’s not about other people pulling her out but it’s about her being creative, imaginative.”

Kim’s book follows Danbi, a young Korean immigrant, as she starts her first day of school in America and learns to navigate between two cultures. Kim wanted to write a book for young readers that focuses on the joy of being “proud of what (you) bring into the world” rather than focus on trauma. And she wrote with her nieces in mind: “I really wanted to create a character or a story for my niece to be proud of her culture and also understand that she’s part of this generation of immigrants… There hasn’t been enough literature featuring immigrant kids that’s accessible.”