No Passenger Locator Forms for 007: As No Time To Die finally has its premiere, we reveal the film’s scintillating locations – from beaches in Jamaica to Italy’s captivating cave town – as well as the not-so-glamorous Salisbury Plain

James Bond is a different sort of traveller from the rest of us — and he’s not exactly the type to bother with boring paperwork at borders when he’s jet-setting around the world.

No stressing about Covid tests and Passenger Locator Forms for 007, just private planes and a martini or two while relaxing in (or out of) a tuxedo with one of his leading ladies.

In No Time To Die, the secret agent’s latest outing on the silver screen — which has its premiere at the Royal Albert Hall on September 28 — it’s no different. Here we round up the film’s main locations… 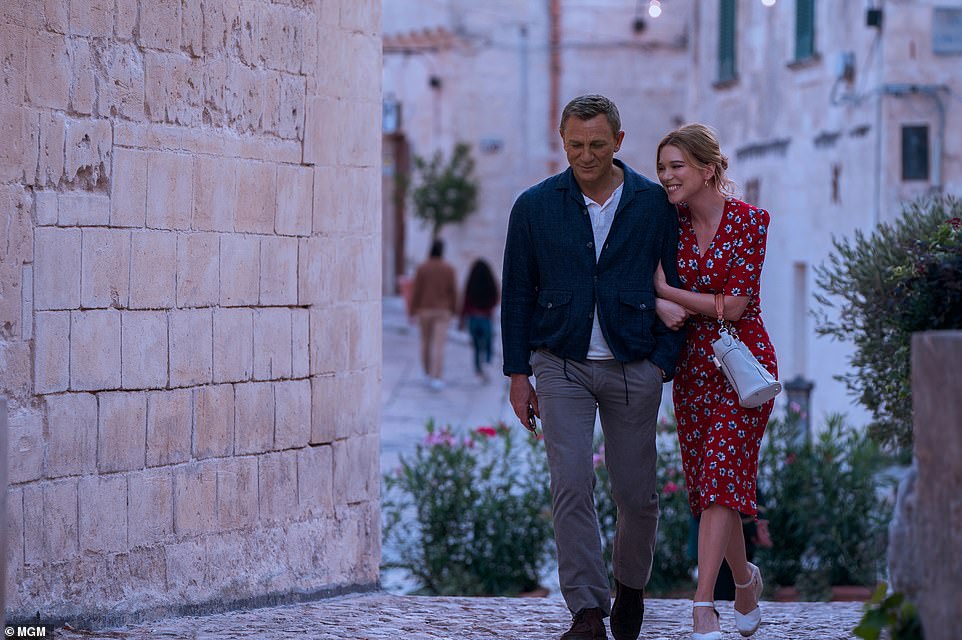 Daniel Craig and Lea Seydoux in a scene from No Time to Die, which premieres in the UK on September 28

The Caribbean island has long been a favoured Bond filming location; scenes from Dr No were shot on the island and it even played the role of the fictitious San Monique in Live And Let Die. Kingston Harbour features in No Time To Die, too.

Stop for jerk chicken and a chocolate martini (perhaps not to 007’s taste) at Tracks And Records, sprinting legend Usain Bolt’s bar and restaurant.

WHERE TO STAY: Head up into the Blue Mountains to stay at the sublime Strawberry Hill, opened in the 1990s by Chris Blackwell, the record producer who brought Bob Marley to the world’s attention; doubles from £224 B&B (strawberryhillhotel.com). 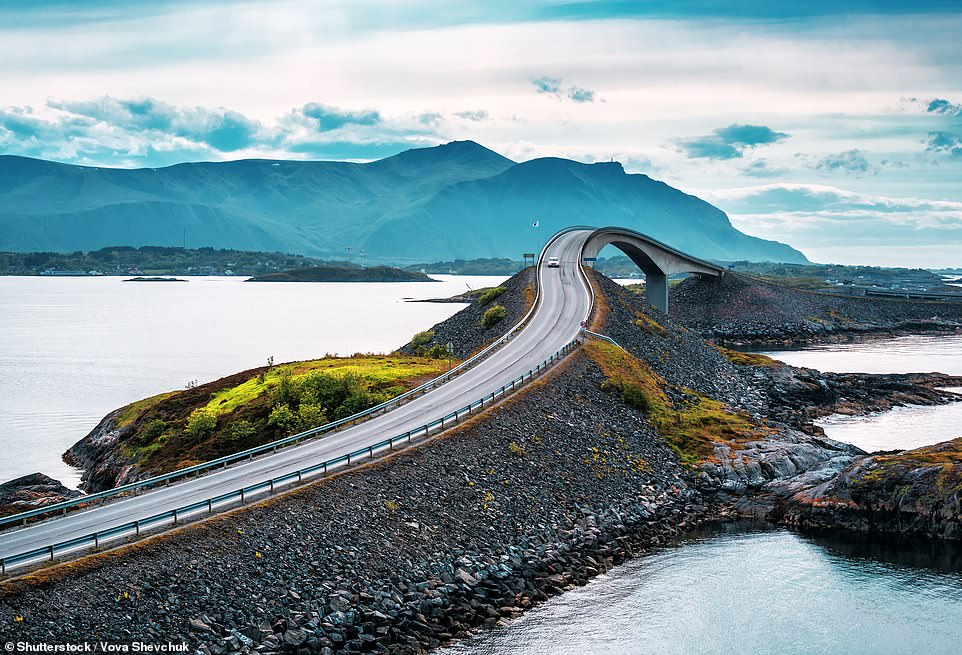 The film sees Bond race down the five-mile Atlantic Ocean Road, above, in his classic Aston Martin V8 Vantage

Connecting the island of Averoy with the Norwegian mainland by way of a cluster of rugged islands spanned by eight bridges, the five-mile Atlantic Ocean Road makes a dramatic setting for a car chase involving 007 in his shiny, classic Aston Martin V8 Vantage. When the spume flies and the wind hollers, this is a wild setting.

WHERE TO STAY: On an island beside the Atlantic Coast Road, the Haholmen Havstuer hotel has a minimalist chic style and a good seafood restaurant; doubles from £208 B&B (classicnorway.no).

The film also features an epic chase across a frozen lake between villain Lyutsifer Safin (played by Rami Malek) and Madeleine Swann (first seen in Spectre, played by Lea Seydoux). This lake is in a forest outside the small, peaceful city of Nittedal, known for its match factory and logging industry — about an hour’s drive north of Oslo.

WHERE TO STAY: The Thief is a lovely boutique hotel in Oslo with a Bond-friendly cocktail bar; doubles from £247 B&B (thethief.com).

The formerly abandoned Italian city of Matera, pictured above, is one of the many filming locations scouted by the Bond team

A dramatic car chase thunders through the twisting streets of Matera, an intriguing ancient cave town. There’s a raucous shoot-out, too (above)

Another high-energy car chase takes place through the narrow, labyrinthine streets of the southern Italian city of Matera, which comprises a cluster of higgledy-piggledy cave dwellings. Abandoned for decades, the old town is currently enjoying a revival (the city was European Capital of Culture in 2019) with chic hotels, restored palazzos and new restaurants.

WHERE TO STAY: Sextantio Le Grotte della Civita is an 18-room hotel within the city caves; doubles from £147 B&B (sextantio.it). 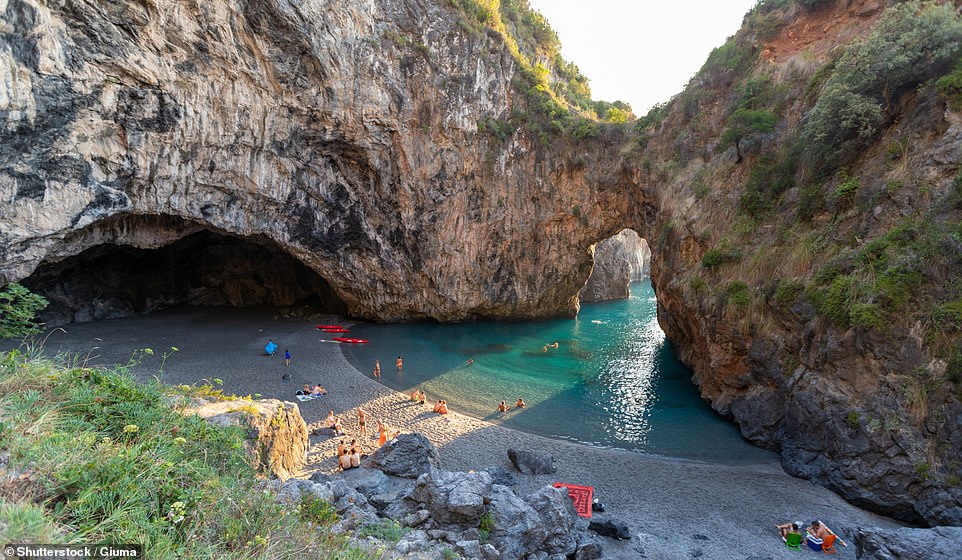 Filming for the new Bond took place on the beach of serene Sapri, near Salerno on Italy’s Amalfi coast. It is known as the Spiaggia dell’Arcomagno (meaning ‘beach with the large arch’). The vast erosion in the cliff face gives access to a semi- sheltered cove — a gorgeous area to loiter for a day.

WHERE TO STAY: Drive a couple of hours south along the coast road to Positano, where you’ll find the Hotel Poseidon, a gloriously retro slab of vintage Italia with an enormous terrace where you could so easily imagine Roger Moore sipping a martini; doubles from £245 (hotelposeidonpositano.it). 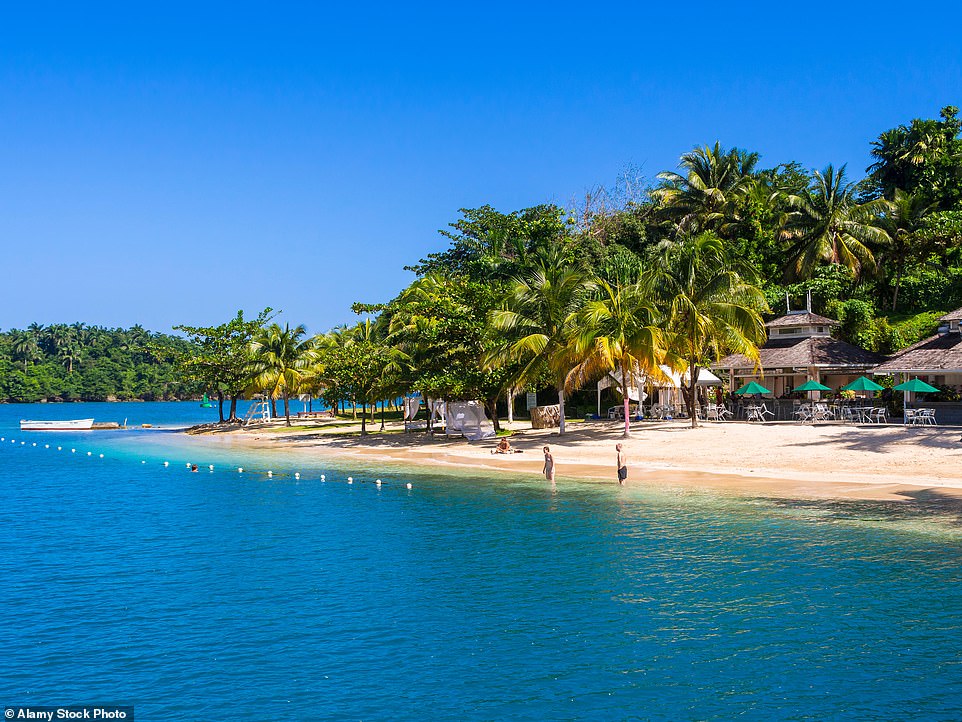 Double-oh heaven: Port Antonio, Jamaica, where the audience meets 007 at the start of No Time To Die 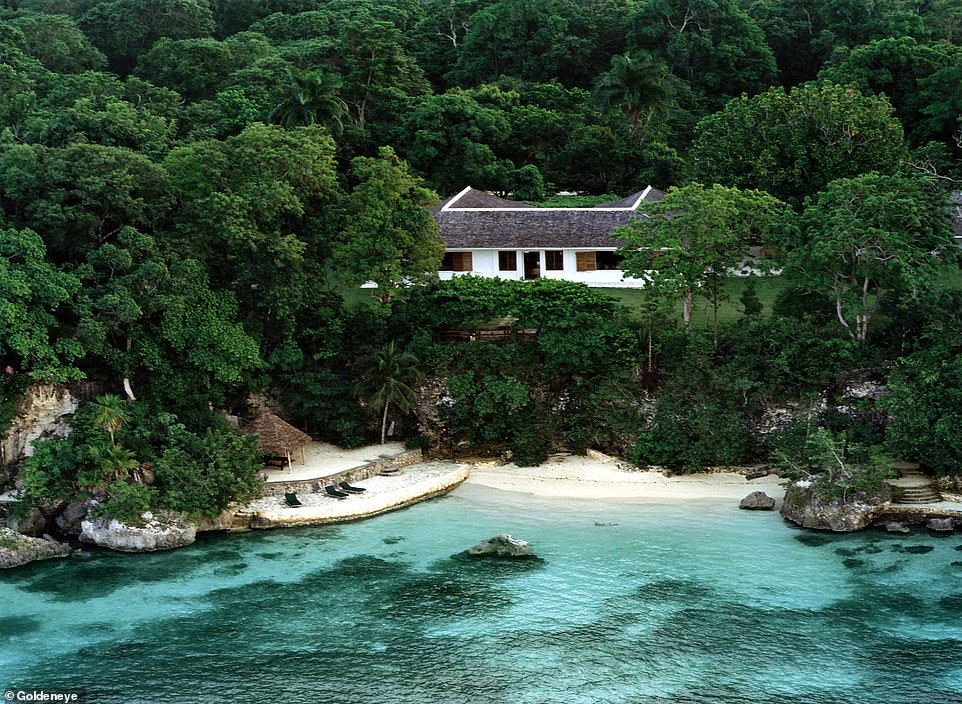 A tiny yacht. A remote waterside cabin. This is where we meet 007 at the start of No Time To Die, retired on the coast of Jamaica while a new 007 (played by Lashana Lynch) takes his place. We have to assume Bond’s retirement doesn’t last long but Port Antonio isn’t a bad place for a secret agent to see out his days. This is a gorgeous old town full of ancient estates, drooping vines and faded glamour.

WHERE TO STAY: Where else to stay but Goldeneye, Bond creator Ian Fleming’s former home, also on the north coast of Jamaica, two hours’ drive from Port Antonio. You can stay in the house Fleming first built here in 1946; doubles from £668 B&B (goldeneye.com).

One of the most remote locations ever used for a Bond movie, Kalsoy, one of the Faroe Islands, is home to barely 150 people. It is nicknamed ‘the flute’ due to its thin shape, with 11 valleys and a warren of road tunnels hewn into the rock. Its dramatic cliffs and lighthouse are believed to feature in the closing sequences of No Time To Die.

WHERE TO STAY: There are no hotels on Kalsoy itself but the Gjaargardur Guesthouse on the nearby island of Gjogv offers a welcome retreat with simple, cosy rooms; doubles from £115 B&B (gjaargardur.fo). 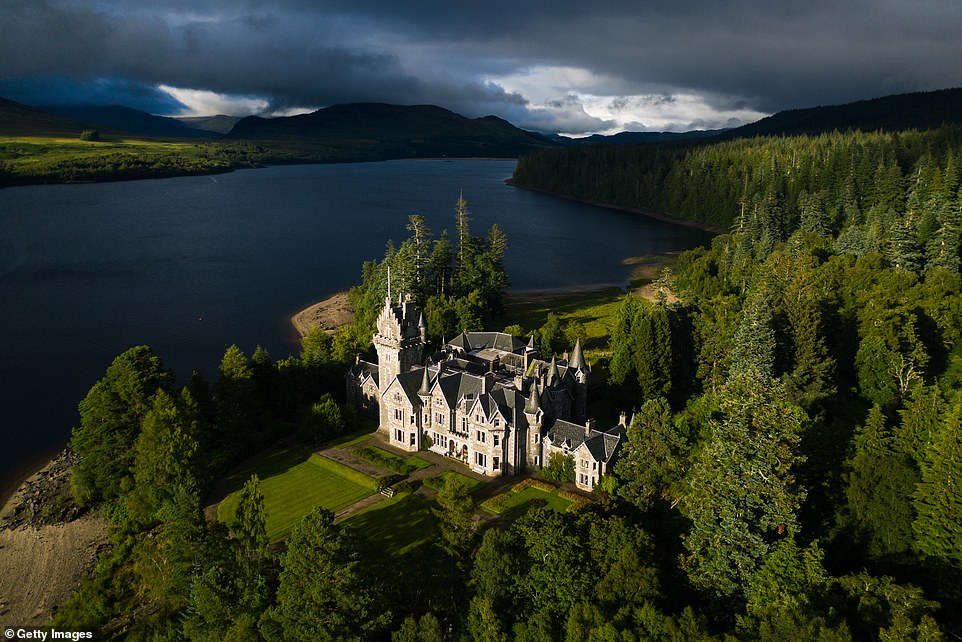 A 007 car chase takes place in Ardverikie Estate (pictured above), which is located deep in Kinloch Laggan in the Scottish Highlands

Yet another car chase, this one involving a car flipping over and Bond being pursued by baddies in Range Rovers, takes place in this estate, home to a classic example of Victorian hubris, located deep in Kinloch Laggan in the Scottish Highlands. The public has full roaming access over the estate. Spot ospreys soaring above and red deer roaming the landscape.

WHERE TO STAY: The Gatelodge is a comfortable cottage sleeping three with a wood-burning stove and blissful solitude; from £785 a week self-catering (ardverikie.com). 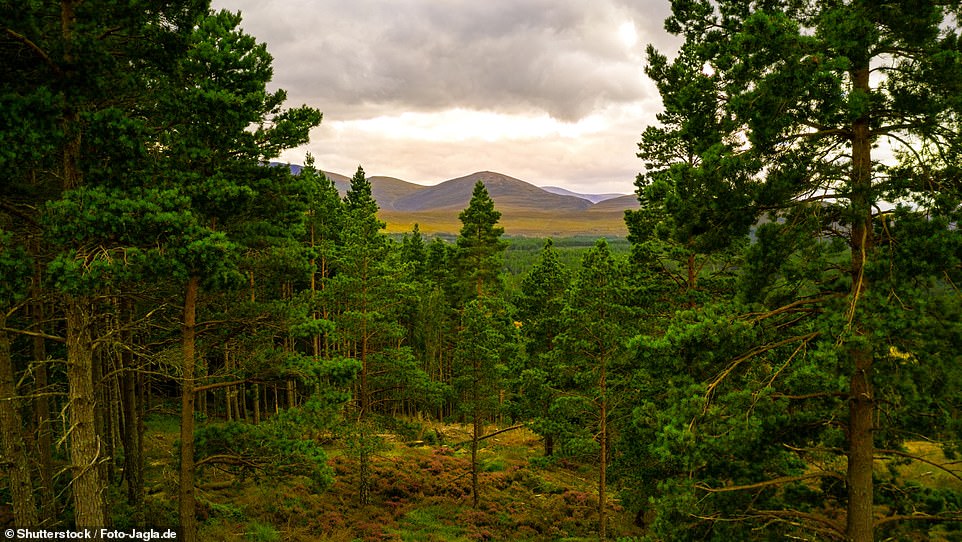 No Time To Die sequences were shot in the Cairngorms National Park, pictured above, in 2019

Way back in 2019, No Time To Die sequences were shot amid the Scots pines, rushing streams, remote bothy huts and eroded mountain peaks of Cairngorms National Park.

At almost 2,000 square miles, to scope out this territory thoroughly could defeat even 007.

WHERE TO STAY: Scot meets Scandi at Killiehuntly, a 17th-century farmhouse under Danish ownership with muted colour tones in its four stylish rooms; from £435 for dinner, B&B (killiehuntly.scot). 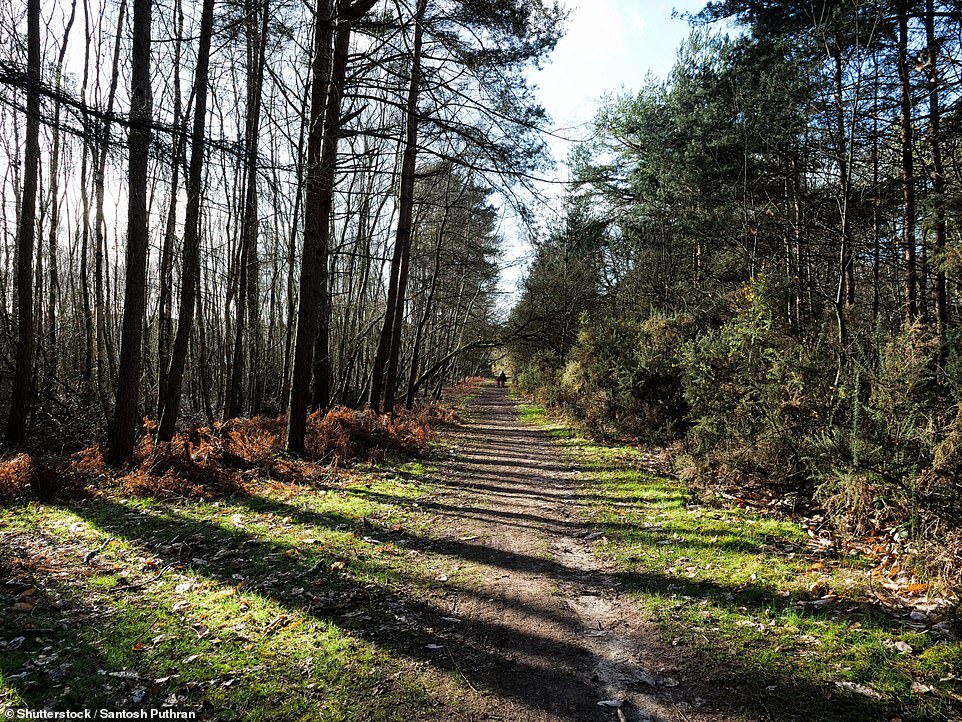 The forest here was closed for 12 days for shooting Bond, also in 2019, although it was so secretly done, no one is quite sure what went on. Buttersteep is part of the Swinley Forest Crown Estate near Bracknell in Berkshire. Amid the Scots pines here lie remnants of attempts to protect king and country long before 007’s time — namely ‘redoubts’, earth fortifications used for training before the Napoleonic Wars. 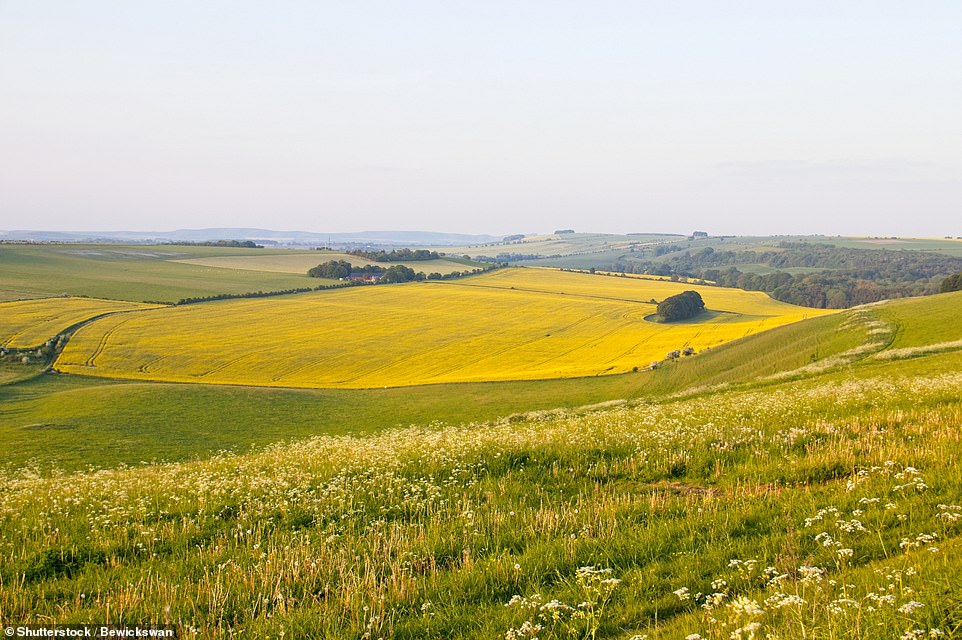 Special effects explosions boomed and Land Rovers with Russian number plates were seen zooming about during filming on Salisbury Plain.

This land is mostly owned by the Ministry of Defence, a vast tract of rural Wiltshire that is also home to the ultra-top-secret Porton Down science and technology laboratory, where research on biological warfare takes place: it’s as close to a real-life version of SPECTRE as the UK gets.

WHERE TO STAY: Bradford-on-Avon is where the flat austerity of the plain gives way to the soft folds of the Cotswolds. Stay at Timbrell’s Yard, a comfortable modern hotel by the riverfront; doubles from £95 B&B (timbrellsyard.com). 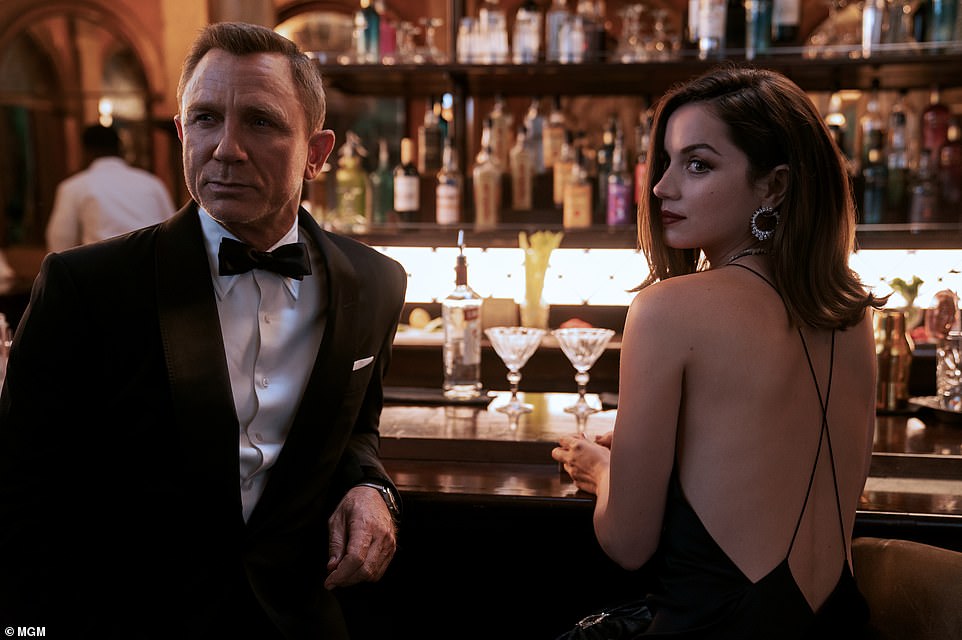