Internet giant Mozilla, which operates the Firefox browser, has launched an online tool that automatically swaps sexist and derogatory terms for the word ‘boss’.

The system – called B**ch to Boss – can be enabled on the Firefox browser and highlights the sexist abuse many women face online.

Mozilla hopes the feature can raise awareness of the social media abuse faced by many women and minority groups. 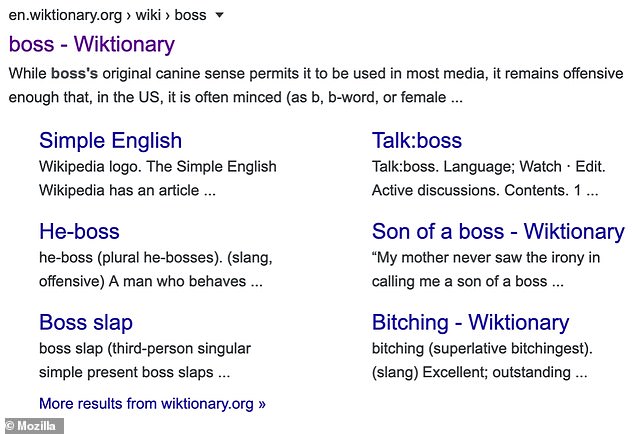 Internet giant Mozilla, which operates the Firefox browser, has launched an online tool that automatically swaps sexist and derogatory terms for the word ‘boss’. The system – called B!tch to Boss – can be enabled on the Firefox browser and highlights the sexist abuse women face

WHAT ARE THE MOST POPULAR PC INTERNET BROWSERS?

Mozilla said in a statement alongside the release of the plug-in: ‘A person’s gender, age, race, or sexual orientation (or any personal characteristic) shouldn’t determine their access, opportunities, or quality of experience online. And yet . . . here we are.

‘B**ch to Boss finds and replaces all instances of derogatory words like ‘b**ch,’ ‘slut,’ and ‘nasty woman’ to simply read ‘boss’ across the web.

‘Will this solve harassment online? No. Will it make comments sections, unsolicited DMs, and angry replies just a little bit funnier? Hopefully.’

The feature works on sites with German, French and English content and also protects men and gender-nonconforming individuals.

It sports the offending content and replaces it with a ‘gender positive word’.

Mozilla released the feature today as research from Amnesty International reveals 21 per cent of women in the UK have experienced online abuse or harassment.

A Mozilla spokesperson told MailOnline: ‘The way women are treated online is disgusting. The statistics speak for themselves.

‘Beyond the numbers and our own personal experiences, the issue really hit us in the face during last year’s International Women’s Day.

‘On this occasion, Mozilla ran a series of videos of women tech innovators, and rather than being celebrated for their achievements many were trolled, bullied and called names.

‘This got us thinking about what we could do about it. One of the things we’re doing this year is to try and make women’s experience a bit less sh***y by bringing some quiet, if not fun, into internet comments.’ .