It sounds like a jarring dream, but a camera caught it all on video.

A Massachusetts man was poked awake from his poolside nap by a black bear on Saturday.

Dawn Bete’s Ring camera recorded video of the bear quietly making its way through her backyard as her husband Matt was asleep on a lounge chair. The bear dips its snout in the water before sniffing its way toward the sleeping man.

The video then shows the bear reaching out and touching Matt Bete’s foot with its paw. When he wakes and sits up in his seat, the bear appears to get scared and runs off.

“Matt was just so startled, picked up his phone with no luck of a good picture,” Dawn Bete wrote on Facebook. 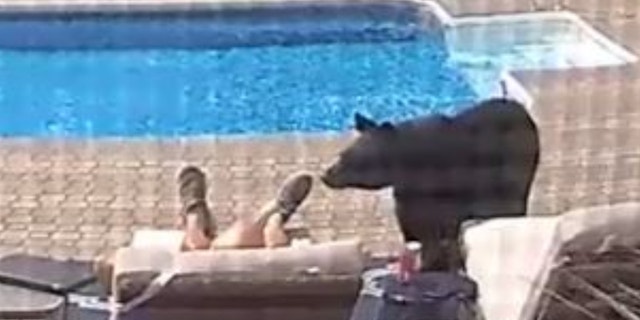 The napping man was unaware of the bear until it nudged his foot. (Dawn Bete via Facebook)

Then the bear appears to approach Matt Bete again as he holds up his phone, the video shows.

“He wasn’t sure how he should react but knew he couldn’t get up that fast but at least he had another chair and table between them if needed,” Dawn Bete wrote. “Luckily, it went running out soon after the encounter.”

The black bear population in Massachusetts has been rising, according to Mass Audubon.

The animals eat many different foods including berries, nuts, fruits, insects, frogs, snakes and fish, according to the wildlife group. The bears can grow to weigh as much as 500 pounds.

Black bears also eat trash, and they can be attracted to areas populated by humans by garbage, bird feeders and outdoor pet food, Mass Audubon noted.

Related posts:
September 16, 2020 Lifestyle Comments Off on Bear nudges awake Massachusetts man napping by pool in surprising video: 'So startled'
Celebrity News:
New Couple Alert? Harry Styles and Tracee Ellis Ross Reportedly Spotted on a Date in L.A.
Sophie Turner Shares Throwback Pics From Pregnancy
BTS Announce New Studio Album ‘BE’
Gigi Hadid may have given birth on a farm in Pennsylvania, according to a report
Tana Mongeau & Noah Cyrus Hold Hands While Getting Dinner in West Hollywood
Recent Posts
This website uses cookies to improve your user experience and to provide you with advertisements that are relevant to your interests. By continuing to browse the site you are agreeing to our use of cookies.Ok