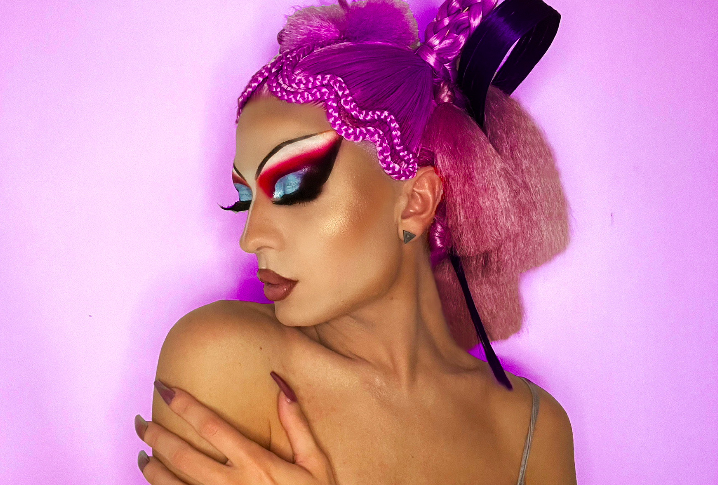 Stepping off stage, with the audience’s laughter and applause still roaring behind me, I couldn’t stop beaming.

Especially when a number of brightly-dressed, extravagant drag queens rushed over. ‘You were amazing,’ they gushed. ‘You looked fab!’

As they milled around me, heaping on their congratulations, I felt like my heart would burst. I never thought I’d feel this at home amongst a group of people. Or this accepted.

You see, I’d grown up in Romania, where being different, especially being part of the LGBTQ+ community, simply wasn’t accepted. And I hadn’t realised how much until I’d tried to come out.

As a child, I’d spent a lot of time online, joining various forums and speaking to people from all over the world. And by the time I was 12, I was pretty sure that I was attracted to boys.

I tried talking to my mum about it, but she found it difficult to understand. It was heartbreaking, as it had always just been the two of us and we’d been so close.

I think the other kids at school could tell I was different too, because I was bullied mercilessly. They’d follow me around, calling me names, threatening me, spitting on me.

I slowly retreated into myself, skipping class in order to avoid their taunts.

The only person I could open to completely was a girl I’d met online but, when Mum found out, she thought she was a bad influence and stopped us talking. I felt so alone.

I started self-harming, and even ran away one night to another city.

As my thoughts and world darkened, I thought there was no other way, but to take my own life. One night, aged just 14, I attempted suicide. It was only as I started to feel sick and panicked that I may not die, but instead be left with brain damage, that I told Mum and she rushed me to hospital.

Worried, she started taking me to school, trying to protect me. But it just made things worse for me. The other kids noticed and the bullying escalated. I tried to take my life again.

It was then Mum suggested I move to the UK. I had an aunt who lived there, and she realised just how badly I was struggling. That I might not survive much longer in Romania.

Obviously these experiences don’t fade straight away, if at all, and I still struggled with my mental health. But as I settled into Manchester, and started studying psychology, fashion and photography at college, I finally felt like I had the fresh start I needed.

I made friends, I started to smile, I even joined Grindr.

It was on there that I met Michael. It was Manchester Pride and, after spotting him on the app, we met up. We had such a strong connection immediately. He made me laugh, and it was amazing to talk to someone who I could be myself with, who finally ‘got’ me.

After our first date, Michael had something to tell me. ‘There’s something you should know straight away,’ he said. ‘I’m a drag queen.’

I looked at him blankly. I hadn’t even heard of the phrase before.

‘We dress up, pretend to be someone else and we perform,’ he explained the basics. ‘My name is Linda Gold.’

I was intrigued. So intrigued that when he explained he was going on a two-week tour with a group of other drag queens, I offered to be their photographer.

It sounded like fun, and fun was something that had been missing from my life for so long.

Those two weeks changed my life.

No-one had to hide away or pretend to be anyone else.

And as I watched the queens transform just like butterflies and I captured their images and listened to their stories, I realised I’d finally found people who’d been through the same pain I had. Who had struggled to find their place in the world, whose loved ones couldn’t understand their lifestyle.

As I opened up about my experiences, I felt heard for the first time.

I knew instantly these were my people.

One night, one of the make-up artists offered to do my make-up and, by now, I wanted to give it a go.

And when I looked in the mirror at the bold make-up, my eyes sparkled. I fell in love with the person I saw there.

So when one of the drag queens was ill and they needed someone to fill in, they asked me. I was terrified but I nodded. Armed with a full-face of make-up and a rather fabulous corset, I took a deep breath and stepped onto the stage, where I threw myself into doing funny lip syncs.

As everyone laughed along with me, my whole skin tingled. I was in my element.

From then, I created a whole other self – Dys Alexia. Dys Alexia is the version of myself I’ve always wanted to be, if insecurities and shyness didn’t exist.

She’s the type of girl people that whisper to themselves and say ‘we couldn’t possibly talk to her’ or ‘she’s out of our league completely’, but when you do speak with her, you instantly fall in love with the kind and humble personality she portrays.

I’ve always been obsessed with the film Mean Girls and I don’t know why the popular blonde girl, Regina George, had to be so mean. I think of Dys Alexia as the sweet version of a stereotypical high school blonde brat!

I also say I’m a DDD – Ditzy, Dizzy but Delicious!

When the tour finished, Linda and I decided to create FunnyBoyz, which is now the UK’s biggest drag queen collective. We’re determined to bring the joy and community and love and acceptance which drag has to offer to as many people as possible.

Now, Michael and I work together, live together and spend all of our time together. I really don’t know where I’d be without him. He listens to me when I’m having a bad day, questions me and is always there for me.

I thank him – and Linda – for saving me from my past, dark life and bringing me into a bright, colourful future.