IT CAN be a little overwhelming when trying to find the best telescope.

Prices can vary wildly and listings are full of terms like aperture, magnification and equatorial mount, adding to the confusion. 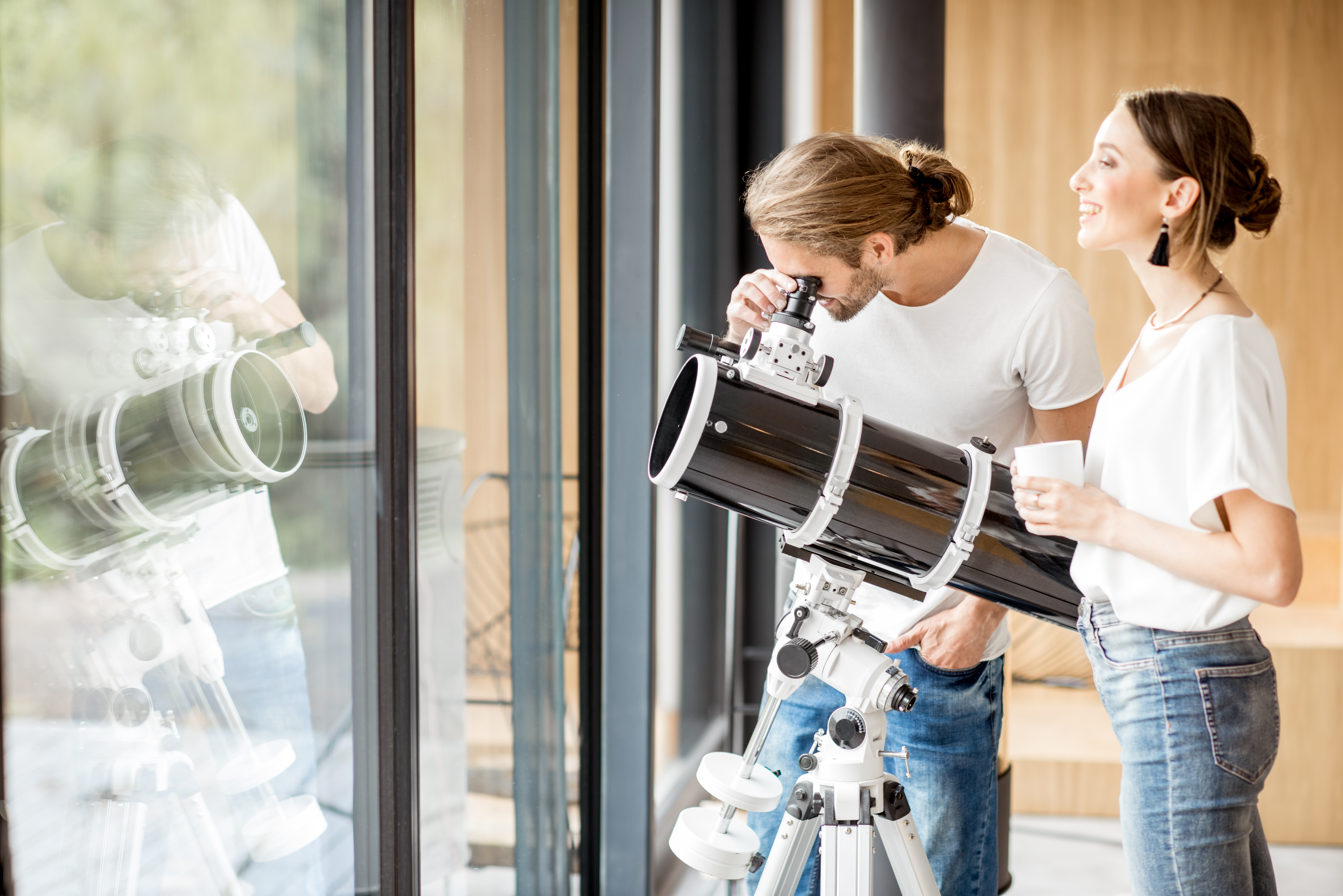 To help make your choice a little easier, we’ve rounded up the best telescope for professionals, amateurs, people on a budget and those with a motor drive.

Typically, telescopes with larger apertures, which indicate the size of the lens or mirror, offer better views.

It’s best to look for large apertures, combined with high magnification, and sturdy mounts designed to keep the telescope stable.

Can I see other galaxies through a home telescope?

It is possible to see other galaxies through a home telescope. To see deep sky objects, (DSOs) you're going to want a telescope with a large aperture to capture the maximum amount of light possible.

Viewing location is important though, as you're not going to be able to spot much where there's a lot of light pollution; head out of towns and cities for the best view of anything in the night sky.

1. The best telescope money can buy 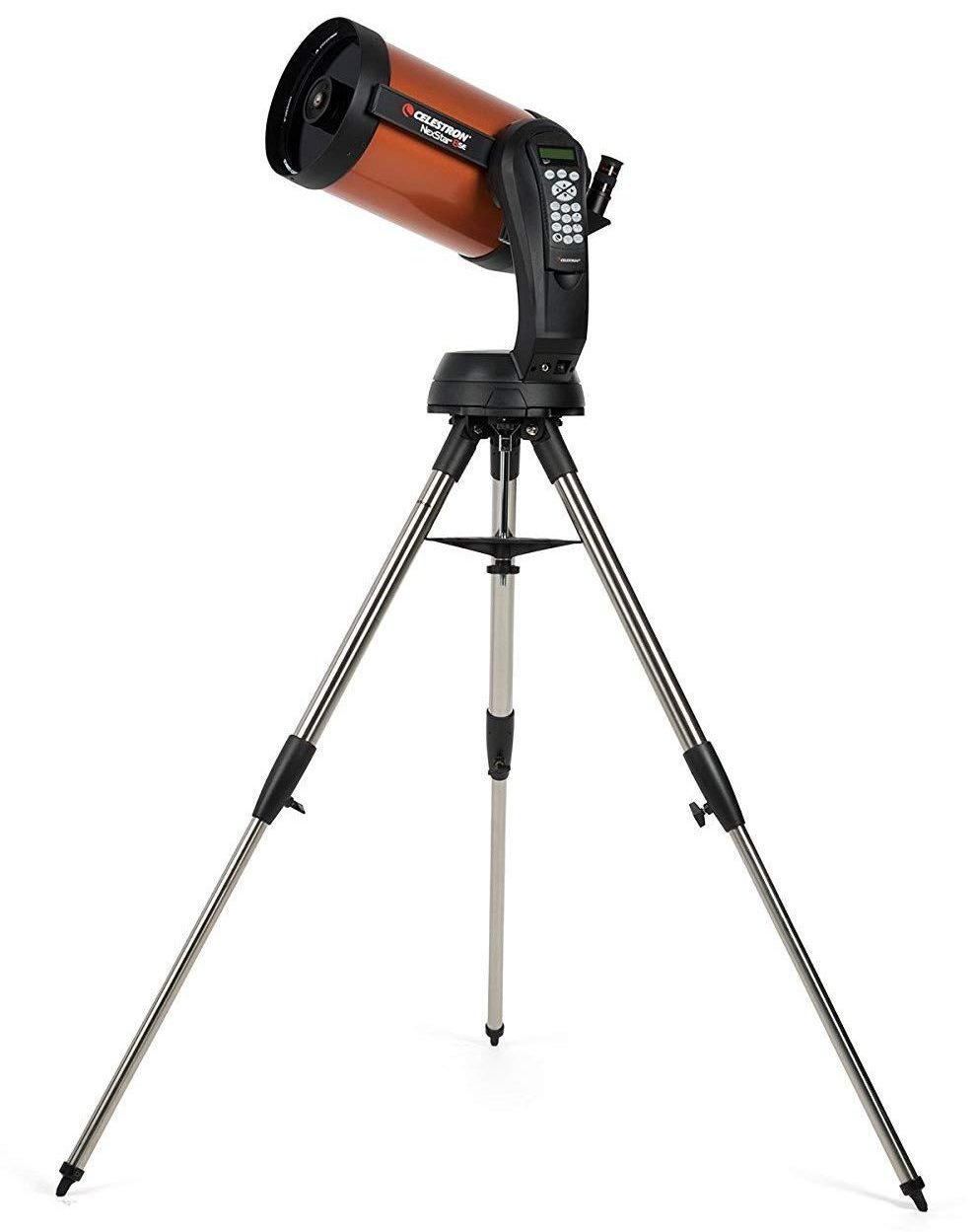 At the top end of the scale in terms of budget, features and style, is the Celestron NexStar 8SE, a perfect choice if you’re looking to get serious about stargazing.

It’s based on the original design of the classic Celestron 8, first released in the 1970s, with its iconic orange tube, and offers eight inches of aperture.

This means you can use the Celestron NexStar 8SE to see even the faintest of far-away details of Jupiter’s cloud bands or Saturn’s rings, as well as peer at craters on the Moon.

Its lowest possible magnification is 29x and its highest is a staggering 480x.

Despite being a telescope aimed at more professional watchers, it’s easy to set up, compact and can be controlled via iPhone or iPad.

The price includes a NexStar+ hand control which helps you locate more that 40,000 celestial objects, or take a Sky Tour in which your telescope shows you the best objects within your line of sight.

2. The best telescope for value for money 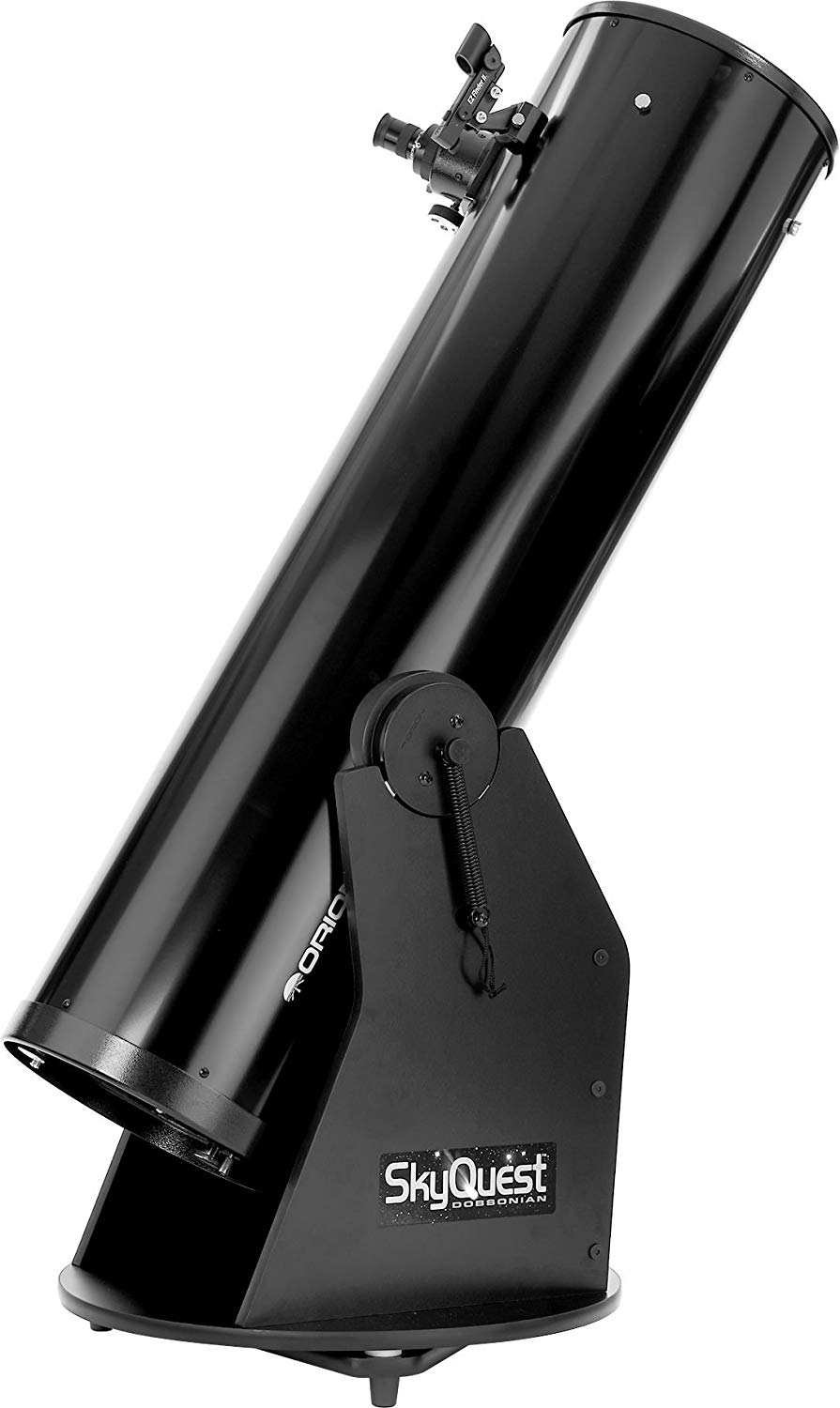 If ease-of-use is as important as aperture and magnification, but if you can’t stretch to the Celestron NexStar 8SE, the Orion SkyQuest XT10 is fantastic value for money.

It’s aperture is larger than Celestron’s at 10-inches, and Orion claims its primary mirror controls the amount of light entering the telescope, meaning it’s easier to see more than you would with smaller apertures.

This mirror additionally creates a decent level of contrast.

Set-up takes less than a minute and the SkyQuest X10 can be used as a point-and-shoot telescope, or, if you’re more au fait with stargazing, you can manually adjust its array of lenses and eyepieces.

The lowest, useful magnification is 36x and the highest, with the eyepieces included as standard, is 300x.

The maximum this telescope can handle is 508x, however this requires additional pieces, sold separately.

You don’t get a hand control or software, which goes some way to explaining the vast difference in price with the Celestron, but the Orion SkyQuest XT10 does ship with a Beginning Stargazers Toolkit full of reference material.

3. The best telescope and motor drive 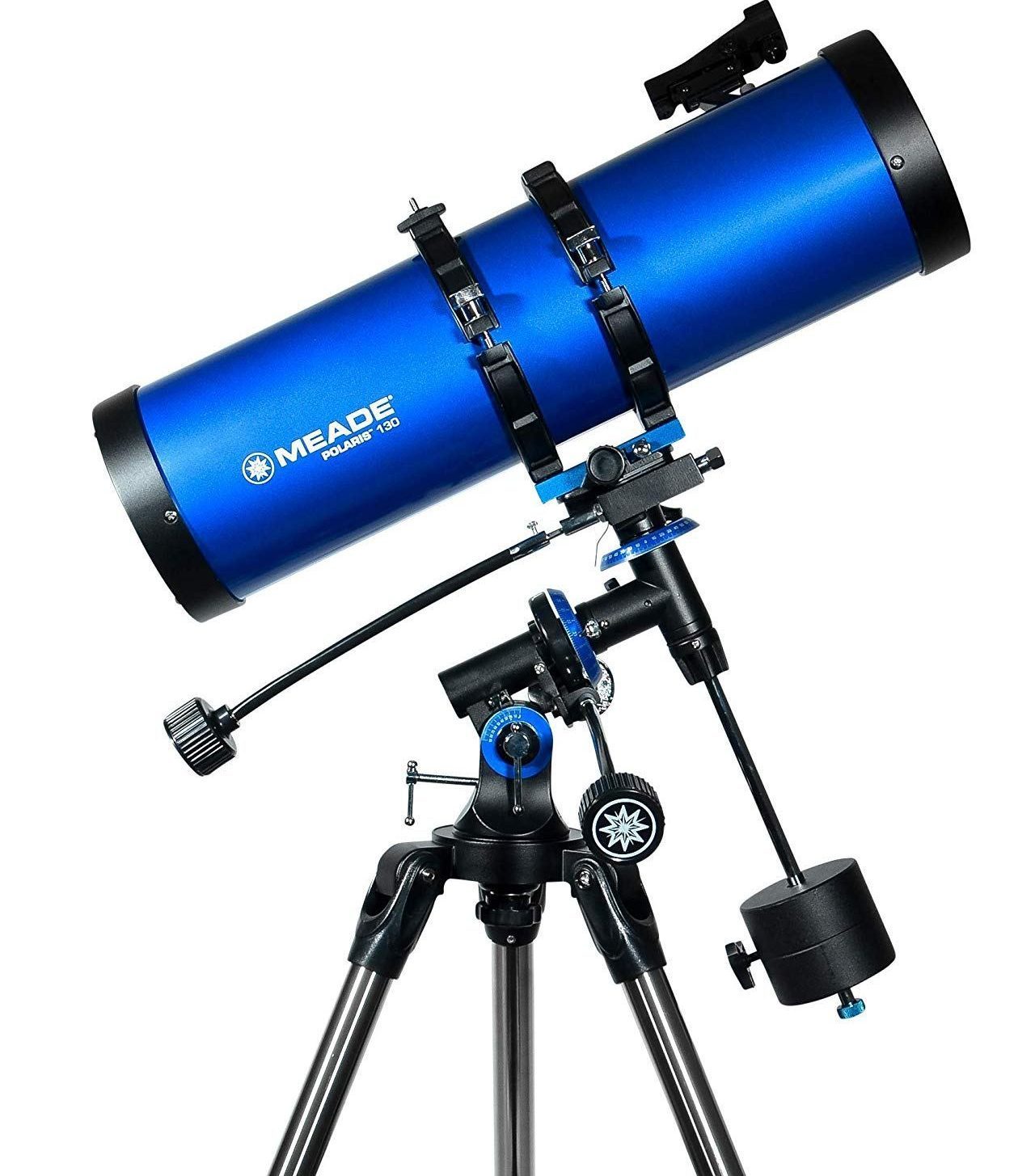 Similar to Celestron’s legacy but without the high price tag, Meade has ploughed four decades of expertise into its Polaris Series of telescopes.

Called Meade Instruments Polaris 130EQ reflector telescope, because its aperture measures 130mm or 5.1 inches, it comes with everything you need to get started.

The equatorial mount works in line with the Earth’s natural rotation and, once you’ve found a celestial body, this mount keeps it in sight.

You can buy it with or without a motor drive (£50 from Amazon), and when the drive is attached, it works in tandem with the equatorial mount to help you track and follow any celestial object.

This motor moves at variable speeds meaning you can quickly and easily change it to track the Moon, planets or stars.

4. The best telescope on a budget 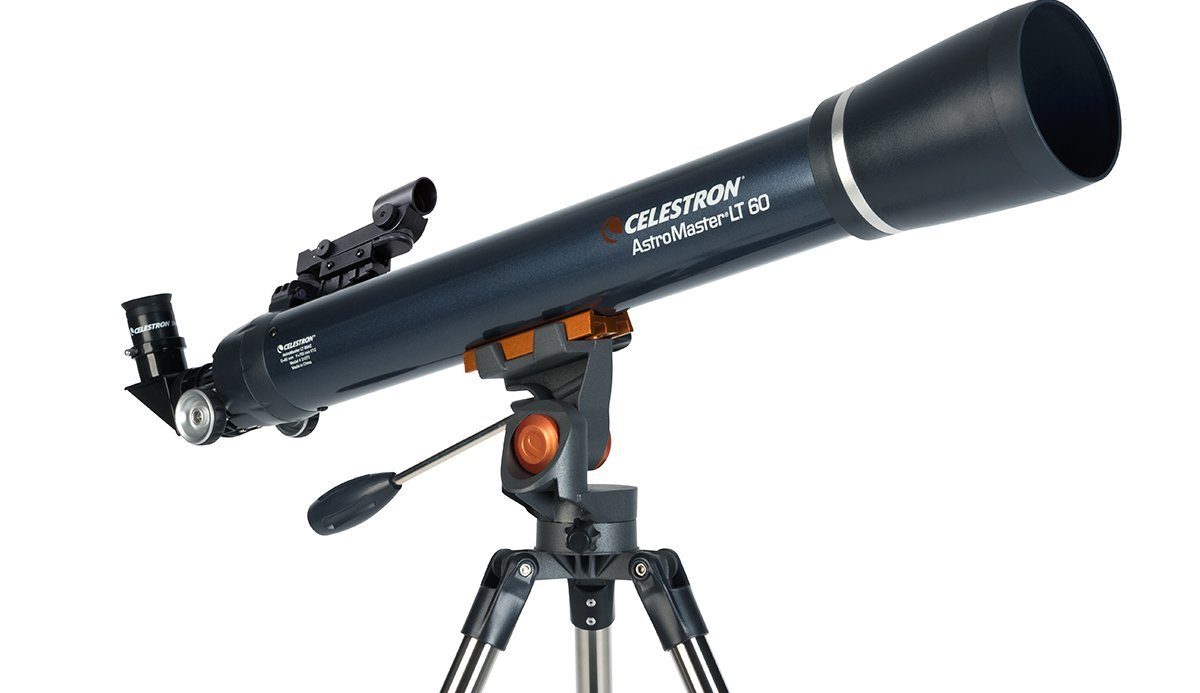 If you’re looking for a portable, easy-to-assemble telescope for both terrestrial and celestial viewing, try the Celestron AstroMaster LT Series.

The 60AZ model, with its 2.3-inch aperture, produces surprisingly bright and clear images of the Moon and planets, this is even more impressive given its low price and relatively weak magnification options.

This will help you see the belts and moons of Jupiter, for example, as well as the rings of Saturn, but for deep space objects, it’s worth opting for one of Celestron’s larger apertures.

Included in the price is a pre-assembled tripod with 1.25-inch steel tube legs and accessory tray, and TheSkyX – First Light Edition astronomy software with a database of 10,000 objects, printable sky maps and 75 enhanced images.

If you liked this round-up of the best telescopes, check out some of our other tech recommendations at Sun Selects.

We've rounded up all the top gadgets you could possible want.

And if you're in the market for a bit of bargain hunting, head over to Sun Vouchers, which is chock full of great deals 24/7.