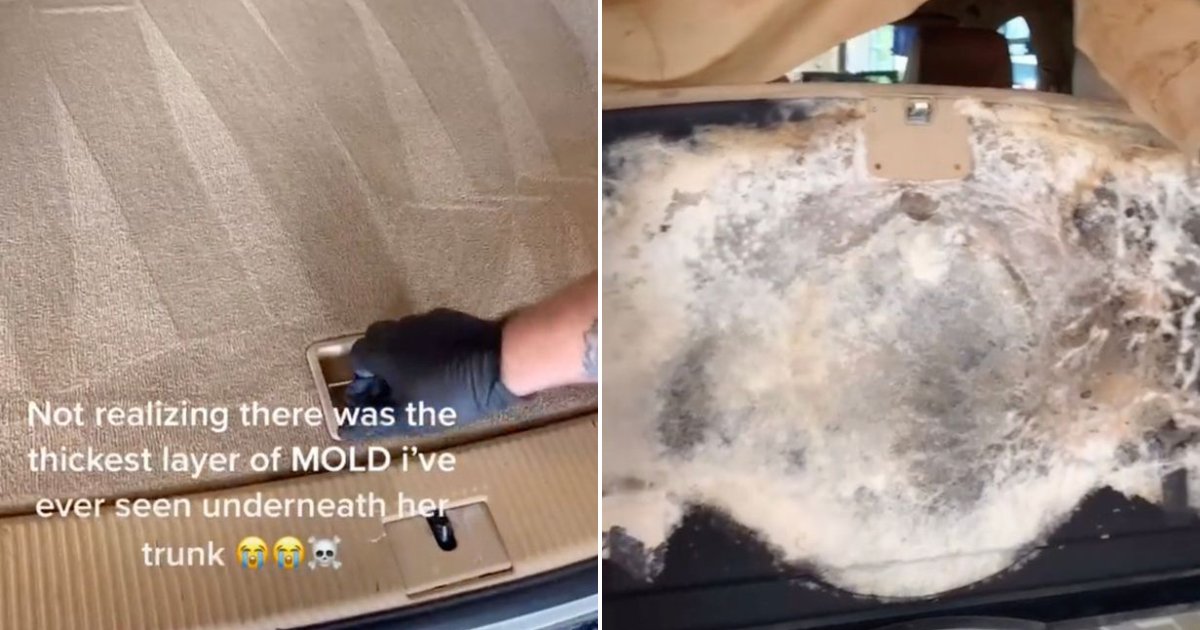 Ever wondered about the hidden dirt in your car?

On the surface, chances are your car looks clean – but the boot may not be.

This was the case for employees at a car wash in the US, who made a disturbing discovery in a client’s vehicle.

TikTok user Sandra Genee posted the grim discovery in a clip that has now been viewed over 388,000 times.

In it, Sandra explained that the car was handed over by the client who asked if they could ‘get a little mould out of the back her trunk.’

‘We were like oh yeah we can get it out for you,’ she said.

Sandra had thought they completed the job until she lifted up the carpet in the boot and made a grim discovery.

‘Not realising there was the thickest layer of mould I’ve ever seen underneath her trunk,’ she wrote on the video. ‘Looked like cobwebs it was so thick.’

Sandra proceeds to show viewers the mould covered boot and the pool of water under the spare tyre that was causing it.

In the caption she added: ‘1 like = 1 prayer for her lungs cause she been driving in that car not knowing there was black mould.’

Those in the comments were shocked and disgusted by the find.

‘How did they not smell it,’ wrote one user.

Another commented: ‘I’m surprised she didn’t get sick! We spend more time in our cars than we realise!’

1 like = 1 prayer for her lungs cause she been driving in that car not knowing there was BLACK MOLD??? #mold #SkipTheRinse #Car #detail #carwash

Some questioned whether the owner knew but was ashamed to say it.

‘I think she knew but didn’t want to admit it’, quipped one viewer.

‘I wanna know if it was a leak and they knew about it and ignored it or what’, said another.

Later Sandra explained the conditions in which the mould was allowed to grow.

‘A leak from somewhere that caused water build up in the trunk and with this Florida sun it probably started growing and spreading fast,’ she said.

Sandra also added that the owner believed it was only a small spot and was shocked at the discovery.

‘She was so mad that she tore the head liner down,’ she wrote.

‘Plot twist is, she probably knew and faked like she didn’t.’

Send us an email at [email protected]