Ross Barkley said it was “a dream” to score against Liverpool as the midfielder helped Chelsea reach the quarter-finals of the FA Cup.

The result meant Liverpool suffered their second successive defeat of this stellar season in a highly-competitive encounter at Stamford Bridge.

Liverpool made seven changes to the side that lost surprisingly at Watford on Saturday – the first reverse of their league campaign after 18 successive victories left them on the brink of a first title for 30 years.

Chelsea, however, still had to overcome a Liverpool team containing the likes of Virgil van Dijk, Sadio Mane, Andy Robertson and Joe Gomez in a hard-fought fifth-round tie.

Liverpool goalkeeper Adrian gifted Willian Chelsea’s opener after 13 minutes when he hopelessly fumbled his 20-yard shot, but the European champions had chances of their own only to see recalled keeper Kepa Arrizabalaga present a formidable barrier with a string of saves.

The game was effectively settled after 64 minutes when former Everton midfielder and Toffees fan Barkley surged from inside his own half on a solo run before beating Adrian with an emphatic strike.

“It was brilliant, a massive result for the lads,” Barkley told BBC One. “We needed a top performance tonight at home after two disappointing results.

“Scoring against Liverpool is massive for me. As an Everton fan, it’s always a dream to score against them.”

The hosts could have had more but Mason Mount rattled the crossbar with a 25-yard free-kick, before striker Olivier Giroud saw an effort brilliantly tipped on to the woodwork by Adrian.

Chelsea boss Frank Lampard will now have Wembley in his sights while Liverpool counterpart Jurgen Klopp returns to the task of wrapping up the Premier League title and overcoming a 1-0 deficit from the Champions League last-16 first leg against Atletico Madrid.

The tiny figure of Billy Gilmour looked like a boy among men at the heart of this FA Cup tie between two Premier League superpowers – but the 18-year-old Scot gave a performance that was huge in stature.

Gilmour, who has only played six games with three starts and a total of 281 minutes, may be short on experience but he looked big on talent as his controlled, creative display deservedly won him the man-of-the-match award.

He glided around midfield, happy to take the ball in deep positions but also willing to make an impact further forward in the face of experienced opposition such as Fabinho.

Lampard told BBC One: “What an incredible performance for a young player. He was a calm head in that first five or 10 minutes. He’s a throwback of a midfielder.

“Can you put your foot in? Yes. Can you make angles to play the passes? Yes. He’s only slight in stature but he’s huge in personality. He deserves people to talk about him after a performance like that.”

Gilmour deserved to be on the winning side, victory clinched by the great enigma that is Barkley.

Barkley, at 26, is approaching the key point of his career when potential must be transformed into something more tangible for Chelsea and England.

Here, Barkley showed both sides to his character, often making the wrong decisions but showing his natural brilliance when he took possession in his own half and surged forward before sending a flashing finish past Adrian.

This was a big victory for Chelsea and Frank Lampard.

Their Champions League hopes look all but over after a 3-0 home defeat in the home leg of the last-16 tie against Bayern Munich and they face a fight to finish in the top four – but they are at the heart of that battle and are now in the later stages of the FA Cup.

Liverpool manager Klopp’s animated demeanour demonstrated that this was a match he was taking very seriously and was desperate to win but it was to no avail.

It has been an unusual FA Cup campaign for Liverpool, with a scratch side full of youngsters winning a Merseyside derby against Everton in the third round, then effectively a youth team beating Shrewsbury Town in a fourth-round replay at Anfield while Klopp and his senior players enjoyed a winter break.

Liverpool and their fans have been given a glimpse of the talents of youngsters such as Curtis Jones and Neco Williams but this was the end of the line.

They had their chances, with Kepa keeping them at bay, particularly in a remarkable sequence in the first half when he blocked from Mane, Jones and Divock Origi in swift succession.

In the end, however, the task was too much, their cause not helped by Adrian’s awful blunder.

Liverpool may not have the Treble of title, FA Cup and Champions League to pursue any more – but the Premier League crown is coming back to Anfield and this side still has enough to make it a memorable night against Atletico Madrid.

Klopp said: “A lot of parts of the performance I really liked. We know we have to improve, it is not about destiny, not about not clicking here or there, it is all about us and we have to take it in the right way.

“We are not interested in Atletico Madrid, it is all about Bournemouth. They are fighting with all they have and they did really well against Chelsea.

“Nobody has to feel sorry for us, we will win football games and that is what we want to do on Saturday.” 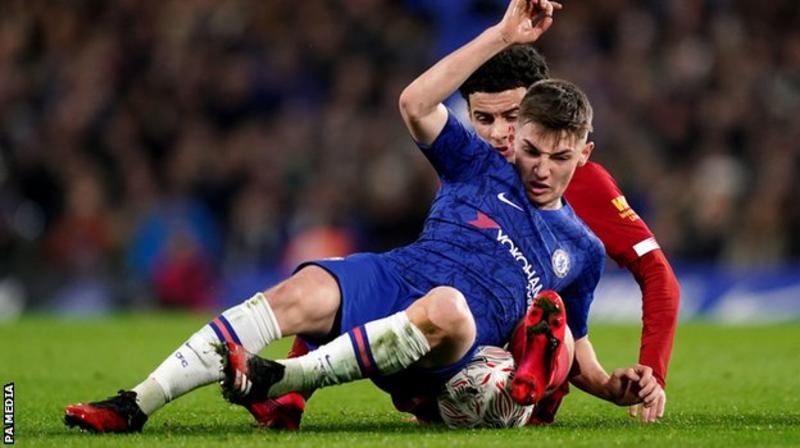 Ex-Tottenham and Newcastle midfielder Jermaine Jenas on BBC One: “There have been a lot of good performances but I have been so impressed by this young lad. He’s had such a calm head and he’s not given the ball away all night. It’s been a brilliant evening for him.”

Sadio Mané (Liverpool) is shown the yellow card for a bad foul.

César Azpilicueta (Chelsea) wins a free kick in the defensive half.

Attempt missed. Mohamed Salah (Liverpool) left footed shot from outside the box is high and wide to the left following a corner.

Marcos Alonso (Chelsea) wins a free kick in the defensive half.

Attempt blocked. Olivier Giroud (Chelsea) left footed shot from the left side of the box is blocked. Assisted by Billy Gilmour.

Attempt missed. Mason Mount (Chelsea) left footed shot from the left side of the box is high and wide to the left. Assisted by Jorginho.

Attempt missed. Roberto Firmino (Liverpool) header from the centre of the box is close, but misses to the left. Assisted by Andrew Robertson with a cross following a corner.

Fabinho (Liverpool) wins a free kick in the attacking half.

James Milner (Liverpool) is shown the yellow card for a bad foul.

Pedro (Chelsea) wins a free kick in the defensive half.

Attempt saved. Olivier Giroud (Chelsea) left footed shot from the centre of the box is saved in the top left corner.

Marcos Alonso (Chelsea) wins a free kick in the defensive half.

Ross Barkley (Chelsea) wins a free kick in the attacking half.

Attempt saved. Pedro (Chelsea) right footed shot from outside the box is saved in the centre of the goal.

Joseph Gomez (Liverpool) wins a free kick in the defensive half.

Neco Williams (Liverpool) wins a free kick in the defensive half.