Slipknot and Stone Sour frontman Corey Taylor recently kicked off a solo trek dubbed the CMFTour, playing his first real concerts in over a year while following Covid-19 safety protocols. He explained why he wanted to get back on the road so quickly in an op-ed for Rolling Stone in March: “People need release and we’re ready to give it to them.” Taylor will be chronicling his experiences in several installations of a tour diary.

My band, “The Morning Dudes,” and I have run up against many obstacles on our CMFTour: price-gouging, overzealous fans, faltering openings, etc. However, our issues are minuscule at best compared to the constant battles and hurdles my wife Alicia runs into when it comes to staging and performing with her Cirque-like dance troupe, the Cherry Bombs, who are our opening act on this run. I would be remiss if I didn’t try to explain what she has to go through just to get the show to go on. For all the hard work that she has put, not only into writing the Macabaret show but also choreographing/overseeing the different pieces involved, the hardest work may be simply squeezing a hard rock/heavy metal Broadway/Vegas–level show into a venue that A) may not be big enough to handle it and B) may not be ready for the level of creativity that is about to go off between those very walls.

Even before her circus gets to town, she has to contend with trying to explain what exactly her show is and what she and the Cherry Bombs require to do it to promoters and bookers who may not comprehend the scope of what they’re bringing into their venue. This is no ordinary revue; hell, there isn’t even an easy way to describe it. It’s more than just a dance troupe. It’s dance, and fire performance, and aerial performance, and pole performance, coupled with storytelling and angle grinding for good measure. Now even an expanded mind needs a minute to take that all in.

So sometimes there’s pushback. “Well, we can’t do pyro.” It’s not pyro. “Well, we don’t have anything to hang you from.” No problem; they have a mobile rig point apparatus. “Well, you can’t do fire in here without insurance.” They’re fully insured on their own, both on the building, the audience, and the performers themselves. “Well, you’ll need a permit and you’ll have to talk to the fire marshal.” No problem; they’re all fully qualified in fire safety and protection. “Well, we just don’t have room for that.” OK, they can set up on the floor. The pushback, misunderstanding and — worst of all — “mansplaining” can be too much to bear for Alicia sometimes. 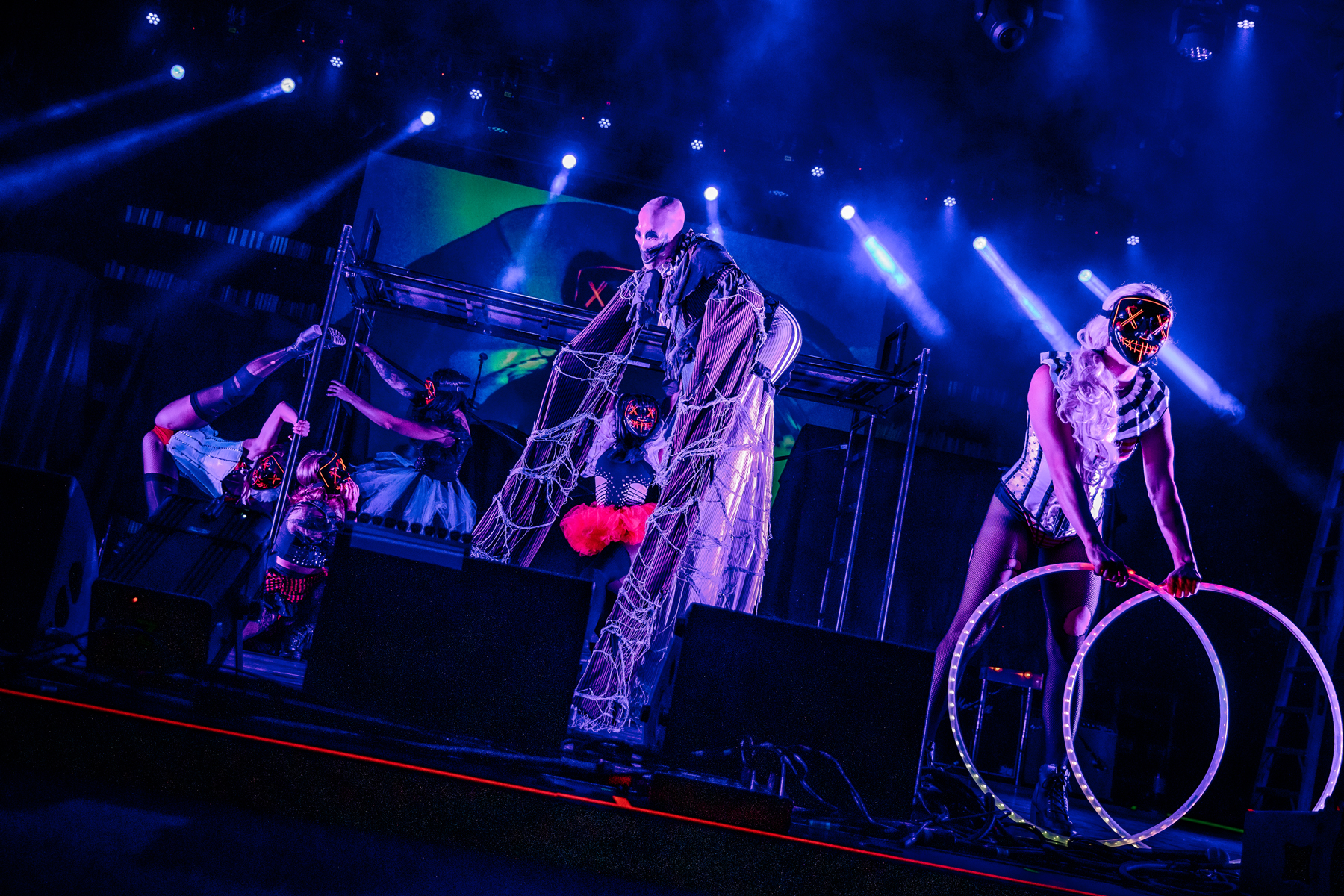 But she takes a deep breath, closes her eyes, redirects them to all the answers that are already in her tech rider, and maps out every performance a little differently for every place we play, not only because she has to but because she wants to, because her dream is just as real as any dude in a band, as any performer who wants to make the audience’s mouths drop, make their eyes perk up, and give them a whole other understanding of what can be done in these places, or what a Rock Show can look like. It’s fire and dancing and sexy and cool and complicated and amazing all at the same time, all set to rad music and killer video.

My wife puts her heart and soul into every show, whether the crowd gets it at first or not. For those of us who know what she has to put up with and do just to get on the stage, we all appreciate and love it even more because it’s a mother fucker. If you haven’t seen it yet, check out her movie/musical Macabaret the next time she puts it up for live streaming, or catch the road version next time we all play together. You won’t believe your senses.